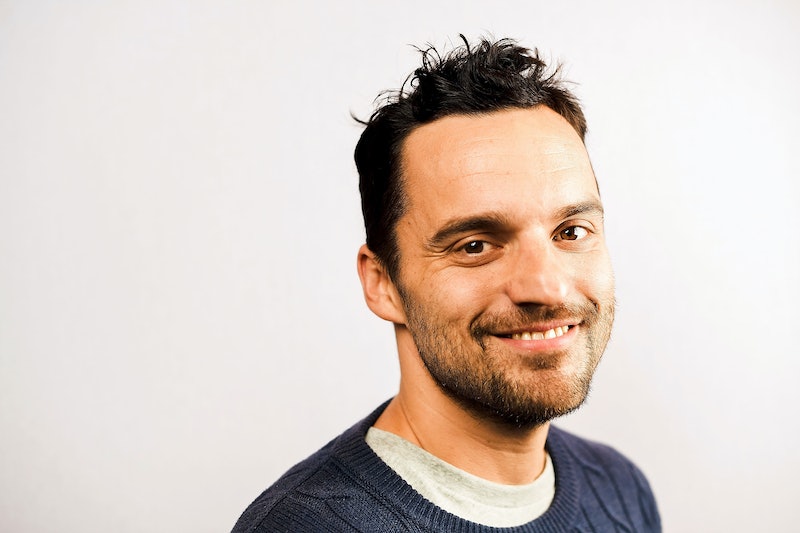 New Girl star Jake Johnson may love the cool guys of cinema, but, he tells me, he isn't interested in playing them on screen. In his new film Win It All, Johnson stars as Eddie, the ultimate uncool guy: a down-on-his-luck gambler. "I feel like the 'gambler' character is a mostly down-on-his-luck guy," Johnson says via phone, a few days before the film's Apr. 7 premiere on Netflix. "I think there’s a thing about movies where lead characters are just so ridiculously cool all the time. I didn't want to make Eddie cool."

Despite having a deep love for the genre of gambling films and the suave characters who star in them, Johnson portrayed Eddie as being different from the norm. "I wanted Eddie to think he might be cool, but what makes him likable is he’s a goober. He’s a gambler and he’s deep in it," the actor explains. Getting older by the minute with no real job or stability to speak of, Eddie gambles at the card table and in real life, hoping to turn his luck around and make something of himself. After losing an insane amount of his friend's money, he has to quite literally win it all back or risk serious repercussions.

It's a nice change of pace for Johnson, who's spent the last several years cultivating an on-screen persona in shows like New Girl and movies like Drinking Buddies as an affable everyman who doesn't nail it 100 percent of the time but is always easy to root for. Eddie, though, goes a little bit deeper, with Johnson giving the gambler stereotype a more authentic spin than typically seen in movies and on TV.

That desire to change up expectations colored Johnson's entire creative process for Win It All, he says; although the movie came with a solid script, improvisation was encouraged from all the actors. "[We said], 'you can always be free to say anything and do anything… but you have certain things that were perfectly scripted how we wanted them,'" Johnson explains of his process alongside director Joe Swanberg, whom he's previously collaborated with on Drinking Buddies and Joshy. "Then, other moments we said, 'This is what we need. Let’s just let the moment happen.'"

Finding that perfect balance between improv and structure was what made, in part, Win It All Johnson's "favorite experience of the three and it was the closest to what [Swanberg] and I wanted our collaboration would be about." It allowed for Johnson to dig deep into the character of Eddie, and in bringing to life a more authentic version of the on-screen gambler, the actor helps Win It All become a hilarious but bitingly truthful entry into a well-worn genre of film.

More like this
At 28, Minnie Driver’s Personal Life Was “Falling Apart”
By Kate Dwyer
Playing A Scrub Nurse On 'Grey’s Anatomy' Made BokHee An Instagram Royalty
By Brad Witter
Lydia Leonard Is Setting The Record Straight
By Olivia-Anne Cleary
Becky G Once Had A Fear Of Speaking Spanish. Now She's Topping The Latin Charts
By Tess Garcia
Get Even More From Bustle — Sign Up For The Newsletter