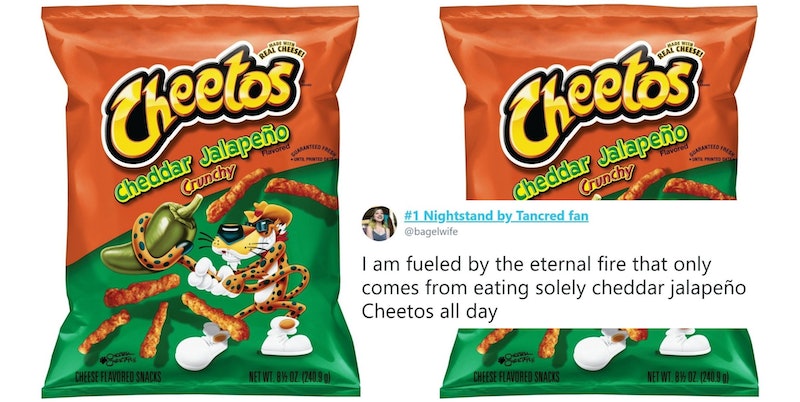 I’ll admit that I don’t exactly keep up with the Cheetos flavor train; they’ve never been my snack of choice, so I tend not to pay too much attention to them unless they’re doing something really extraordinary. However, a flavor has recently been brought to my attention that warrants further investigation: Crunchy Cheddar Jalapeno Cheetos exist — and apparently, they’re pretty good. I like cheese; I like jalapenos; so, it stands to reason that I’d probably like these spicy, cheesy treats, too. And yet — somehow — I have gone years without even knowing that they were a thing. In case you, too, are in that boat, come — let us explore this brave new world together.

I’m not precisely sure exactly when Crunchy Cheddar Jalapeno Cheetos were initially released, but they’ve been around for quite some time. One of the earliest reviews I’ve been able to find of them — a YouTube video that’s literally just nine seconds of someone giving a thumbs up in front of a bag of the things — dates back to 2009; however, if a timeline of the history of Cheetos I dug up from the depths of the internet is to be believed, they were actually released two years earlier than that, in 2007. I say “if it’s to be believed” because it was made via Timeline Maker, not by Cheetos or Frito-Lay and therefore not necessarily an official source — but it is quite detailed, so I’m willing to give it the benefit of the doubt.

In any event, though, it appears that this flavor has been around for roughly a decade — and given that I literally just found out about them today, that's pretty impressive. A quick look on Twitter reveals that they’ve long had their devoted fans; however, they definitely seem to have flown under the radar somewhat, possibly due to being overshadowed by their more famous sibling, Flamin’ Hot Cheetos.

Speaking of: How spicy are they? Let’s take a look:

According to YouTuber Lucky Penny Shop, Crunchy Cheddar Jalapeno Cheetos are one of roughly six Cheetos flavors that can be justifiably classified as “hot” — the others being Crunchy Flamin’ Hot, Crunchy Salsa Con Queso, Crunchy Flamin’ Hot Limon, Flamin’ Hot Puffs, and Crunchy XXtra Flamin’ Hot. As far as spice goes, the Cheddar Jalapeno option seems to be on the milder side; on Lucky Penny Shop’s scale of one to five, they only ranked at level one. “For someone who doesn’t like any heat at all, you probably wouldn’t eat them, because they do have a tiny bite," noted the YouTuber — but given that the spiciest of the bunch, the XXtra Flamin’ Hot Cheetos, clocked in at level four, that’s pretty tame, relatively speaking.

Brand Eating is in agreement. In a review from 2014, the snack food site noted, “The taste… delivers a solid jalapeno punch without the tanginess of lime you would get with Flamin’ Hot Cheetos. It’s not a spicy either, with a mild rolling burn that never gets too uncomfortable.” Brand Eating did observe that “the jalapeno notes cover up a little bit of the signature cheddar flavor,” which might be a strike against them if you’re into Cheetos for the cheese factor; however, the review continued, “The crunch is the same… and the jalapeno-cheese combination is tasty.”

Similarly, food blog So Good wrote in 2008, “These are not all that spicy, yet they do manage to have a bit of a slow burn afterward” — and that “they taste like Doritos.” So, hey, if Dorito are your jam, good news! These probably will be, too.

The best part about this whole thing is that, unlike some treats I could name, you don’t have to jump through a billion, increasingly complicated and often international hoops to get your hands on Crunchy Cheddar Jalapeno Cheetos. They’re available at a wide variety of retailers, including Target, Kroger, Amazon, and even Sam’s Club. Typically they run around $3 for an 8.5 ounce bag, although the price might vary depending on the market.

Now if you’ll excuse me, I have some shopping to complete.