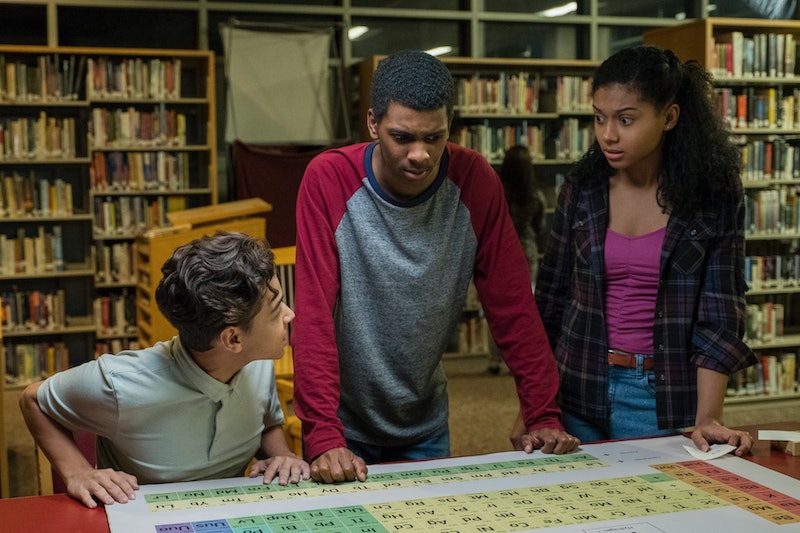 Spoilers ahead for On My Block Season 2. It's an understatement to say that Jamal (Brett Gray) is an oddball, but the Goonies superfan is also highly perceptive. While his friends were preoccupied with relationships, unrequited crushes, and the perils that come with living in Freeridge, Jamal's singular focus was finding out what happened to the RollerWorld money. On My Block Season 1 showed him following an increasingly muddled set of clues, which eventually led him to a duffel bag filled with cash. It's a goofy subplot, but one that makes the show as wonderful as it is.

According to legend, RollerWorld was a Freeridge business that the Prophets had been using to launder money back in the '80s. Abuelita (Peggy Blow) told Jamal in Season 1 that two Santos members, Benito and Frankie, stole $250,000 from RollerWorld and buried it somewhere in the neighborhood before getting arrested. In Season 2, audiences learn that they pulled off their heist during a Shalamar concert. Unfortunately, the two men were killed in prison, and no one else seemed to know where they'd hidden their stash.

However, Jamal discovered that a third member was involved — Lil Ricky — but he died shortly after the heist, too. The high schooler eventually tracked his gravestone back to a former Santos member named Chivo (Emilio Rivera), with a creepy penchant for garden gnomes. Ironically, Jamal's treasure hunt concluded at the football field, which the high schooler had tried so hard to avoid all season. But while Season 1 ended with him riding his bike down the street, bills flying out of the duffel, he quickly became petrified with what exactly to do with the money now that he had it.

In Season 2, Jamal momentarily loses the duffel when his mom mistakenly donates it to Goodwill. Once it's recovered, he and his friends learn how to launder the dirty money, eventually settling on a company called Money Bunny. And although they successfully clean the cash, Spooky takes it all back, claiming it belongs back in Santos hands.

Before all of this, however, both Jamal and Abuelita become convinced that the money — which amounts to $200,000 — was cursed after bad things keep happening to people around them. And after Ruby's grandma's hands become gnarled and she's no longer able to work, she goes to a curandera (or medicine woman), where she's told that there's something in the house that doesn't belong. Both she and Jamal interpret this to mean the money, but it turns out to be Mario's girlfriend, Amber, who is pregnant with what turns out to be another man's baby.

So while the RollerWorld money itself wasn't cursed, Monse makes a good point when she says that all money is cursed. "This money is gonna do a lot of good for a lot of people," she says. "So if there is a curse, we're about to reverse it." So while the kids may not have gotten their share of the money, they were able to use the treasure to ensure Cesar's safety — well, until they're kidnapped in the season finale, at least. Nothing good lasts forever, right?

So although it's unclear what will happen to the kids in On My Block, the RollerWorld mystery, at the very least, has been solved.