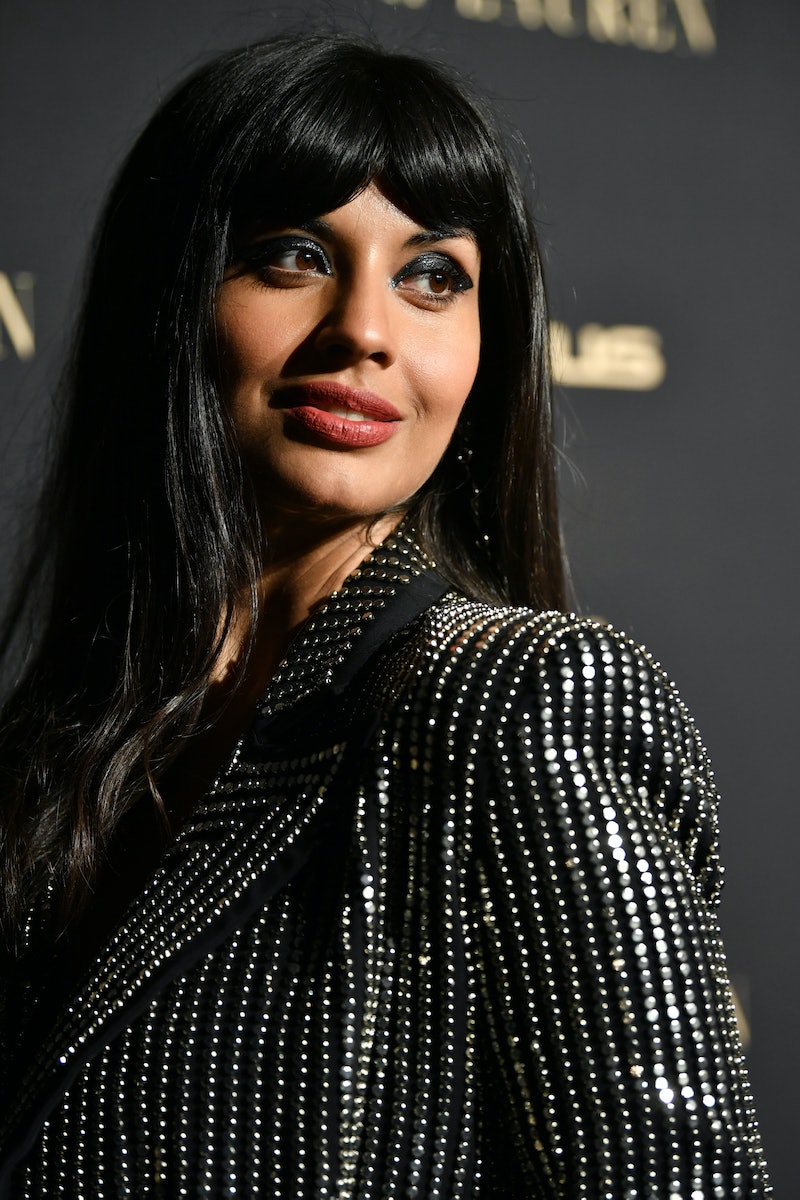 The Good Place star Jameela Jamil has found a hill she's willing to die on — speaking out against elements of the fashion industry that can negatively impact women. On Tuesday, Oct. 15, Jameela Jamil and Sara Sampaio got into a Twitter argument over the modeling industry, after the actor criticized designers for casting "long-starved, terrified teenagers" in their runway shows.

Jamil's comment came as a response to a Twitter video of fuller-figured models dancing down a runway, which she praised as "fun" and "beautiful." And Sampaio, a Victoria's Secret Angel, quickly called out Jamil for her "offensive" description of the stereotypical fashion model, retweeting the actor and writing, "From someone that is always preaching for body positivity [Jamil's comment] just screams hypocrisy."

The actor then defended herself in another tweet, claiming her comments weren't directed at "all models." Furthermore, Jamil explained, she was trying to make a point about the "toxic industry," as a whole, not the models themselves. "I was calling out the shows and the industry," she wrote on Twitter, "Not the kids."

However, Sampaio responded that she felt Jamil "chose to attack [some] girls just so you can celebrate others," with her comments, adding in a follow-up tweet that she felt Jamil's comments were perpetuating "negative assumptions" about models and women who work in the fashion industry. "Most of these girls are teenagers," she continued, "And they don’t deserve to be constantly put in a negative box like you just did."

The pair continued their back-and-forth, with Jamil describing fashion as a "dangerous industry for too many," and sharing that, as a former model, she understands that many of the people who work in fashion "are all struggling with ongoing unrealistic standards of this industry you benefit from, which is why you are fiercely defending it." Sampaio, meanwhile, responded that she felt they were talking about two different things, though she did add that she, too, feels there are issues with the modeling industry.

The conversation continued into Wednesday afternoon, with Sampaio accusing Jamil of "twist[ing] the narrative to service [her] own agenda" and of being condescending towards her and models in general.

Ultimately, the pair reached a kind of cease fire in their conversation, but not before they could go one more round about Victoria's Secret. After Sampaio attempted to end the conversation, Jamil returned, calling out the model's employer as "transphobic" and "fat phobic." The actor was likely referring to Victoria Secret's CMO Ed Razek, who, last year, explained that he didn't want to have transgender models in the Victoria's Secret Fashion Show. He later released a statement apologizing and insisting, "we absolutely would cast a transgender model for the show." He resigned in August of 2019, and his departure from the company came on the heels of Victoria's Secret hiring transgender model Valentina Sampaio.

Sampaio responded to Jamil's attack, saying, "I proudly work for a company that has made mistakes and that understands that and has been working on changing that." And the exchange finally ended with Jamil writing, "If you're speaking out against what your company did then GREAT. I look forward to seeing your activism on that with your big profile."

While the pair clearly did not reach a consensus, Sampaio did acknowledge multiple times that the modeling and fashion industries have plenty of issues, especially when it comes to promoting unrealistic body image. As an activist, a lot of Jamil's work has been focused on calling out industries that do just that. She's made a habit of fighting against unrealistic beauty standards and calling out their detrimental effects on women. And she isn't afraid of sparking a few Twitter feuds along the way.

More like this
Self Esteem's “F*cking Wizardry” Is An Anthem About Knowing Your Worth
By El Hunt
Nicola Coughlan Channelled 'Bridgerton' Chic At London Fashion Week
By El Hunt
Kate Middleton's Tribute To The Queen Also Had A Connection To Princess Diana
By Sam Ramsden
The Try Guys Cheating Scandal, Explained
By Grace Wehniainen
Get Even More From Bustle — Sign Up For The Newsletter