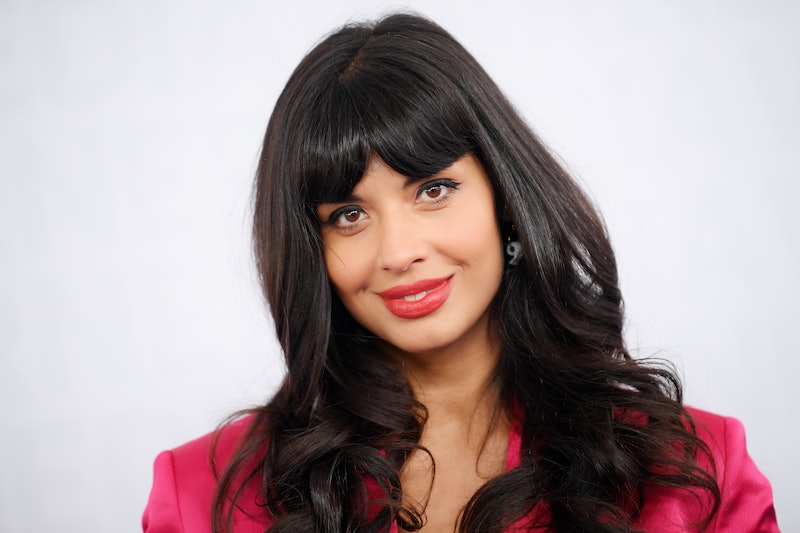 Social media definitely has a dark side. It can trigger feelings of jealousy and affect your self-esteem — and that's just the beginning. After she joined the cast of The Good Place, Jameela Jamil was basically forced to join Instagram, the star recently confessed to W Magazine. Despite her resistance up until that point, though, now she's working hard to turn the platform into a more positive, inclusive community.

Jamil is pretty active on Instagram these days. From selfies, to pics with her costars, to funny quotes and tweets — the content she chooses to share runs the gamut. However, there's an overwhelming amount of more serious substance on her page too, which focuses on her passion for activism.

"I was on Twitter talking bullocks for years and no one was listening, and then I had to join Instagram, really, for The Good Place," Jamil recently admitted to W. "They made me join Instagram and I guess I have really taken to it and it's become a fairly massive part of my life, and I use it to scream at people."

She's joking about that last part, of course. Well, kind of. The star is admittedly outspoken, and can definitely get pretty fired up from time to time. Not that anyone can blame her. Like many people today, she's angry about all the awful things going on in the world right now. Jamil isn't just screaming at people about them, though — she's trying to provoke positive change.

"I think I do good work on Instagram," the star told W. "I think I've created a safe space on social media which wasn't easy to do. But it's this really beautiful place that people can come to, and so many people do ... And it's a genuine community of people who are just tired of being erased."

She then went on to discuss how much of her career has been fueled by her own fear of being erased. Historically, Hollywood hasn't been the most inclusive space in terms of non-stereotypical racial representation. As a South Asian actor herself, Jamil can personally attest to that, and it's one of the reasons why she's fighting to make sure that everyone feels included — in Hollywood, on social media, and otherwise.

"We are determined to try to represent everybody, and that means anyone from someone from any race, or any background, or any age or with no hair, with loads of hair, with a colostomy bag, with no colostomy bag; everyone is welcome, everyone is celebrated. And I think we need more of that in Hollywood. Whenever Hollywood takes a chance and tries to do that it pays off tenfold."

Some celebrities use Instagram to flaunt their outfits. Others use it primarily to promote new projects. Most of their pages are curated based on what they want to get back from their posts. In Jamil's case, though, it's not about what she can get — it's about what she can give everyone else.