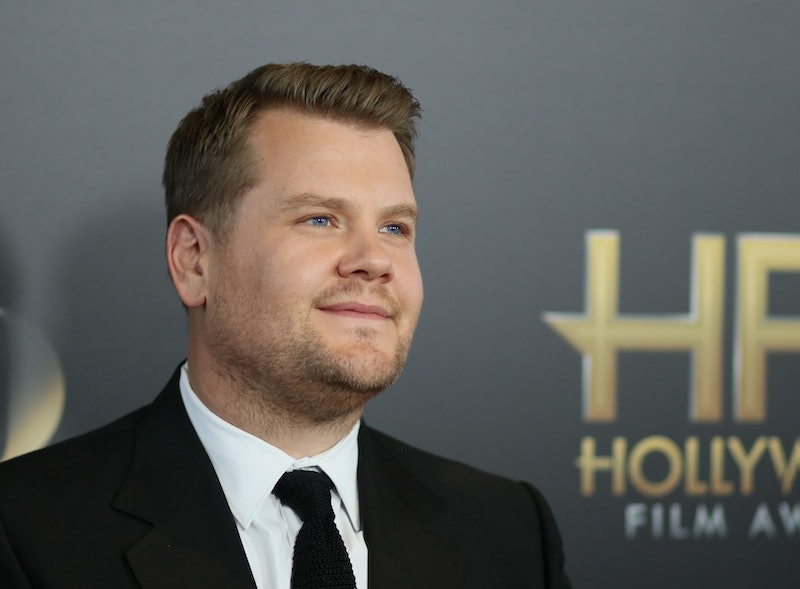 James Corden may have found stateside fame as the charismatic host of the Late Late Show, but he's also padded his résumé with plenty of acting credits. In fact, his first recorded on-screen role dates back to 1996, which means he's been navigating the entertainment industry for an impressive two decades. Now, Corden has joined the cast of Ocean's Eight, and it shows his career is still flourishing far beyond the late-night circuit.

As reported by Deadline, he'll play an insurance investigator who grows suspicious of a group that's planning a heist in New York. The film serves as a female-powered spin-off to Steven Soderbergh's high-praised Ocean's Trilogy, banding together a slew of talented Hollywood women. Sandra Bullock, Cate Blanchett, Anne Hathaway, Mindy Kaling, Sarah Paulson, Awkwafina, Rihanna, and Helena Bonham Carter are all set to star. For his part, Soderbergh is producing alongside Ocean's vet George Clooney, and Gary Ross (The Hunger Games) is directing. Matt Damon will reprise his role from the original Ocean's franchise, but only for a brief cameo.

Corden's casting follows a standout last few years for the British comedian. After joining the Late Late Show in 2015, he catapulted into the international spotlight — thanks in part to his viral Carpool Karaoke segment. But, as many fans know, he got his start in acting.‌ ‌

Corden first rose to prominence on U.K. drama Fat Friends, which ran from 2000 to 2005. Later, he co-created English rom-com Gavin & Stacey, which earned widespread acclaim and was hailed a breakthrough for BBC Three. In 2014, he appeared alongside the likes of Meryl Streep and Johnny Depp in Into the Woods, where he portrayed The Baker. More recently, he lent his voice to animated favorite Trolls, and he's set to take on the title role in the forthcoming live-action adaption of Peter Rabbit.

Across his 20 year career, Corden has racked up over 50 acting credits. He's also won a slew of awards, including a coveted Tony for his leading performance as Francis Henshall in Broadway comedy One Man, Two Guvnors. Given such a decorated history, his casting in Ocean's Eight is no surprise. It only proves his star is getting brighter.