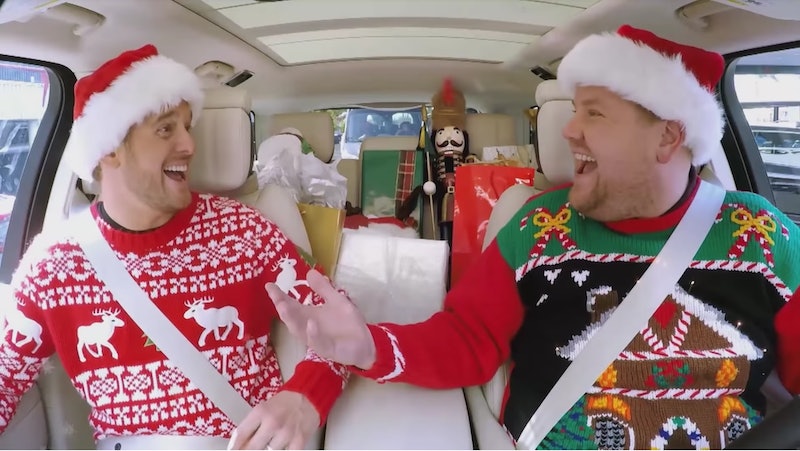 There might still be a few more days until December 25, but James Corden is celebrating the holidays a little early, with the help of some of his biggest celebrity guests. The Late Late Show released their Christmas Carpool Karaoke episode on Friday, with everyone from Michael Bublé to Migos singing along to the Darlene Love classic, "Christmas (Baby Please Come Home)" in the car.

Like most classic Carpool Karaoke episodes, the hilariously festive clip kicked off with Corden alone in the car — although this time, he was joined by a backseat full of wrapped presents — needing someone to help him get home. So, naturally, he summons the king of Christmas music (that would be Bublé) to help bring the holiday spirit to the streets of Los Angeles. Bublé also came dressed for the occasion, wearing his own ugly Christmas sweater and Santa hat in order to help make Corden feel properly "Christmassy."

Of course, not all of Corden's celebrity guests were feeling quite as festive as Bublé — Cardi B responded to the host's declaration that "It's Christmas!" with a delightfully deadpan, "But it's not even cold outside!" Thankfully, though, it didn't take anyone very long to get into the "Dripmas" spirit, as Offset, Takeoff and Quavo of Migos rechristened the holiday.

In addition to getting to hear the Migos rappers show off their harmonies, and seeing Corden and Adam Levine hold hands while they serenade each other with Christmas songs, the holiday Carpool Karaoke also featured a very sweet holiday message from the Late Late Show host and Barbara Streisand.

Corden added: "Have a great time everyone. That's what we're trying to say."

One element that should definitely help Christmas music fans kick off their celebrations properly this year? Hearing stars like Christina Aguilera, Shawn Mendes and the princess of Christmas herself, Ariana Grande, add their own flair to a classic holiday tune, with plenty of exciting riffs, belting and whistle notes. After all, everyone knows the holidays haven't started until someone starts belting out Christmas music at the top of their lungs.

Most of the clips appeared to have been filmed at the same time as the stars' original Carpool Karaoke appearances, which helps explain why Grande's hand is all bandaged up. Over the summer, the singer revealed on social media that she had injured her hand while filming Carpool Karaoke with Corden, but that she "never had more fun." However, the source of her injury wasn't revealed until October, when Grande and Corden took part in a haunted escape room in order to celebrate Halloween.

"I love Halloween," the singer revealed while filming for Carpool Karaoke. "I love being scared. I think it's so much fun." However, since the segment was filmed over the summer, she and Corden decided to go to a haunted-themed escape room, as there were no haunted houses for them to journey through.

At the end of their hilarious, expletive-filled adventure, the mystery of Grande's injured hand was solved: After finding the final clue, a masked man crawled out of a small door and attempted to grab the singer and talk show host, and Grande tripped in her attempt to escape. When they returned to the car, Grande's hand was all bandaged up.

"That was traumatic," Grande joked about the experience, though she joked that her wrapped hand made her "look kind of hard."

Hopefully Grande's Christmas celebrations won't result in the same kind of injuries as her haunted Halloween adventure — although it seems as if she and all of the other star-studded Carpool Karaoke guests have been ready to get into the holiday spirit since the summer.