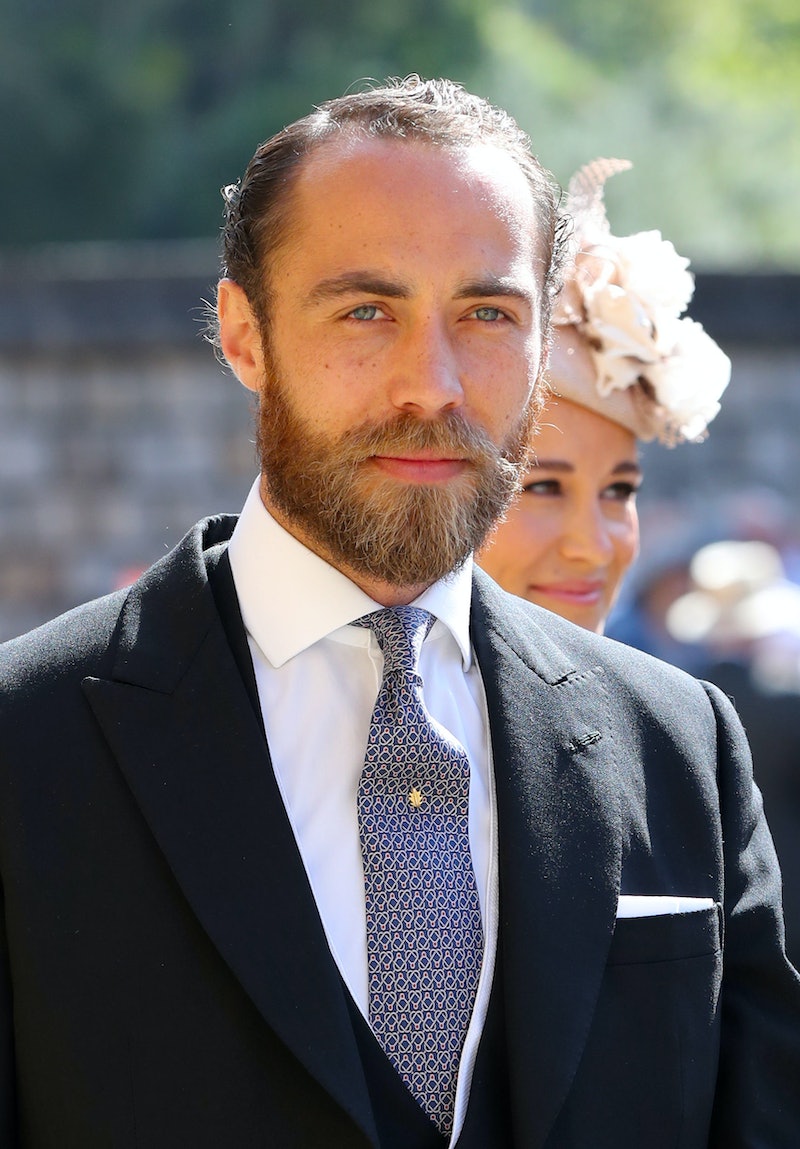 On Oct. 6, Kate, Duchess of Cambridge's younger brother James Middleton announced his engagement to Alizee Thevenet. "She said OUI," he wrote under a smiley selfie with her from Lake District, England. "Our secret is out but we couldn’t be happier to share the news." He ended the caption with a possible wedding hashtag, #jalizee, and emojis of both the United Kingdom and French flags.

Alizee's engagement ring was perfectly displayed in the photo. It's a blue sapphire solitaire surrounded by small diamonds, which is strikingly similar to the late Princess Diana's engagement ring, which Prince William, Duke of Cambridge ultimately gave to Kate when he proposed in 2010, per Good Housekeeping. It's unclear whether or not James' selection was an intentional homage to the family heirloom, but there's no doubt that it's a beautiful ring.

Along with the official announcement on his grid, James also shared a sweet compilation of videos and pictures on his story sharing the news. The first clip showed them swimming together and then kissing underwater. He attached the song "Sexy Weekend" by Scoundrels to play in the background. "I asked @alizeethevenet a question the other day..." he wrote, implying that they waited a few days to update the world. The next slide contained a compilation of photos of them together. He teased her answer, writing, "And she said..." timing it perfectly with the moment the Scoundrels song sang, "Yesssss."

Unfortunately, Alizee's Instagram page is set to private, so her reaction or any additional photos she may have captured from the special day haven't been made public.

Alizee was born in France, and according to the Daily Mail, is trilingual, which explains the multiple French references made in James' post. She has been settled in London for a while now, though, after graduating with a masters degree in investment and finance from Queen Mary, University of London. She met James in a London bar last year, according to E! News, and they have been together ever since.

It wasn't even five months ago, on May 18, when the two made their public debut as a couple at Queen Elizabeth's cousin, Lady Gabriella Windsor's wedding to Thomas Kingston, per Marie Claire. Days before that, Alizee first appeared on James' Instagram page on May 7. He posted a selife with her from a sailboat with the caption, "Sail away with me." At the time, it was a distinct turn from his regularly posted dog content.

Now, he posts both of them together. On July 16, he shared a photo of Alizee sitting by the pool alongside his golden retriever mid-jump in, showing how she is a part of his world and his pets'.

Back in January, they were spotted on the water in the French Caribbean island St. Bart, and Alizee's father, Jean-Gabriel Thevenet, told the Daily Mail that they were very much in love then. "My daughter Alizee is very happy with James," he said. "I know she is very happy. We keep our fingers crossed for them." It must've worked.

More like this
Chrishell Stause & G Flip Have “No Rules Or Regulations” In Their Relationship
By Brad Witter
Selena Gomez Is Fine Being Single, But She Still Manifested Romance On 'SNL'
By Martha Sorren, Jake Viswanath and Jack Irvin
Lindsay Lohan Is “The Luckiest Woman In The World” After Her Marriage
By Grace Wehniainen
Kimberly J. Brown & Daniel Kountz Looked Back On Their ‘Halloweentown’ Romance
By Stephanie Topacio Long
Get Even More From Bustle — Sign Up For The Newsletter