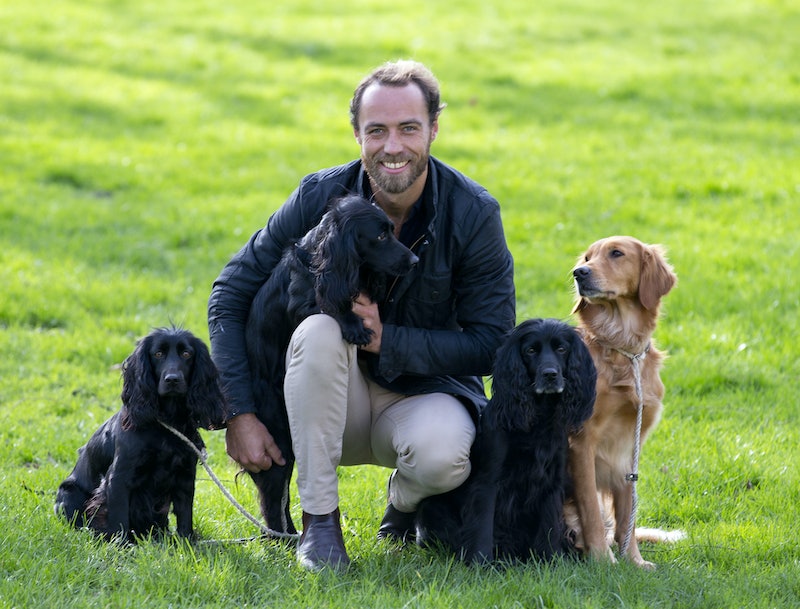 For many people, lockdown has been a time to try out a dramatic makeover. Whether it's dying your hair different shades to avoid the dreaded root situation, or addressing the fact you can no longer visit a barber by shaving everything off. And the latest high profile guy to give that a go is none other than Kate Middleton's brother. Yes, James Middleton just shaved his beard off and believe me when I say, he looks like a totally different person.

The Duchess of Cambridge's brother shared an Instagram video yesterday in which he got rid of his well-known beard right in front of our very eyes, before surprising his fiancée Alizée Thevenet. Thevenet had never seen her man without a beard in all the time they have been together. In fact, Middleton has not not had a beard for a total of seven years now.

The video, which was posted to Middleton's Instagram account yesterday, showed the entrepreneur sitting alongside his four dogs and explaining to the camera that as him and Thevenet were due to marry this month, he thought it was time to show her what was underneath the beard. He then proceeds to shave off his beard with an electric razor, before finishing things off with shaving cream and a basic razor.

The caption to his video read: "It’s been 7 years since I last shaved so I decided to surprise Alizee..."

After revealing the final look to the camera, he then goes to find Thevenet, who is unsurprisingly shocked when she sees the results.

Thevenet, who is French, squeals with delight when she first sees Middleton, before saying "It's so weird," then adding: "Even when I kiss you it's different."

It's fair to say the royal's brother looks almost unrecognisable (and much younger) without his beard, which we have become accustomed to over the years.

Middleton became engaged to Thevenet in October 2019, and announced the news via Instagram with a photo of the pair smiling and a beautiful ring on Thevenet's finger.

The caption read: "She said OUI" in honour of Thevenet's French heritage.

More like this
Jemima Khan Used Her Own Life As Inspo For 'What’s Love Got To Do With It?'
By Darshita Goyal
'Bridgerton's Regé-Jean Page Is The World’s Most Handsome Man
By Darshita Goyal
Gerard Butler Insisted On Adding This Pivotal Scene To 'Plane'
By Catharina Cheung
'Abbott Elementary' Fans Probably Missed This 'Parent Trap' Easter Egg
By Sam Ramsden
Get The Very Best Of Bustle/UK
Sign up for Bustle UK's twice-weekly newsletter, featuring the latest must-watch TV, moving personal stories, and expert advice on the hottest viral buys.