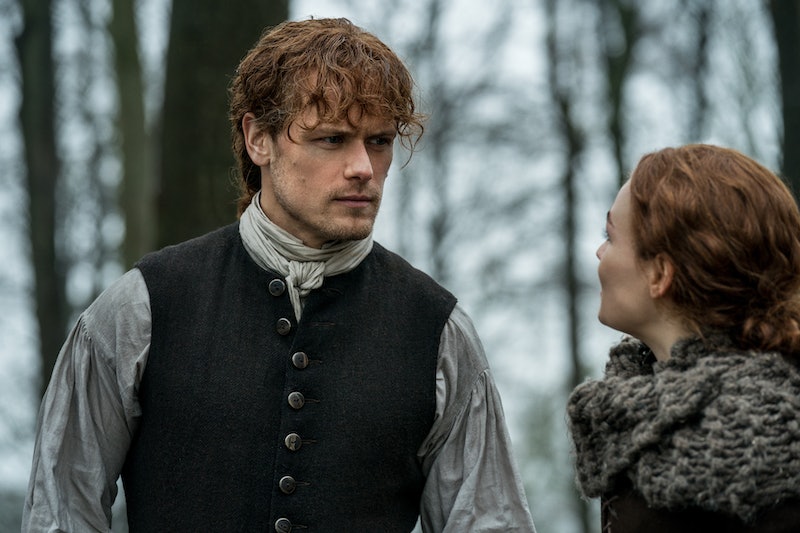 Spoilers ahead for Outlander Season 4, Episode 10. Brianna and Jamie's relationship on Outlander has been complicated, to say the least, but in the Jan. 6 episode, the newly united father and daughter are able to connect over their shared traumas. Not only does their conversation about rape bring them closer, but it highlights an issue still sadly salient in 2019: After an assault like the ones both Jamie and Brianna endured, victims often blame themselves.

In the very beginning of the episode, Jamie approaches Brianna to say he knows about her rape and pregnancy. She then admits that she feels foolish for following a man she didn't know into a dark room, and that she thinks she could have avoided the assault. "I could have been brave, I could have fought," Brianna cries. "I hate myself for what happened." When Jamies says that she couldn't have stopped it, Brianna angrily replies, "I could've tried harder!"

Turning to some age-old reverse psychology, Jamie concedes that perhaps Brianna is to blame. She must have "wanted it," he taunts, evoking the familiar assumption that women are somehow "asking" to be assaulted. Of course, Jamie doesn't actually believe this; he's just trying to provoke Brianna so that he can prove his point. When she attacks Jamie for his hurtful words and he holds her off, she realizes she wouldn't have been able to physically overpower Bonnet — even if she tried.

During an interview with Vulture, actress Sophie Skelton explained that she filmed the rape scene — which was ultimately cut because the show's writers decided it felt gratuitous — as if Brianna had entered a state of "tonic immobility." According to Scientific American, this is a kind of temporary paralysis in response to fear, during which "individuals cannot move or, in many cases, even speak." And based on a 2017 study conducted by the Stockholm South General Hospital in Sweden, it's quite common: Of 298 women who visited the hospital's emergency clinic for rape victims, 70 percent reported significant tonic immobility and 48 percent reported extreme tonic immobility.

Under those kind of circumstances, it would be nearly impossible to fight back, though it's important to note the events leading up to Brianna's attack weren't her fault either; regardless of the way she dressed, what she said, or how she acted, it wasn't, and is never, an invitation to be assaulted.

Still, women like Brianna continue to shoulder responsibility for their own rapes. That's partially due to psychological coping mechanisms, but also largely because we live in a culture too often insistent on blaming the victim, not the abuser. Through Jamie and Brianna's conversation, Outlander shows how victims can internalize these damaging attitudes, which is exactly why we need to stand by them, not turn against them — especially when, three centuries later, not much has changed.