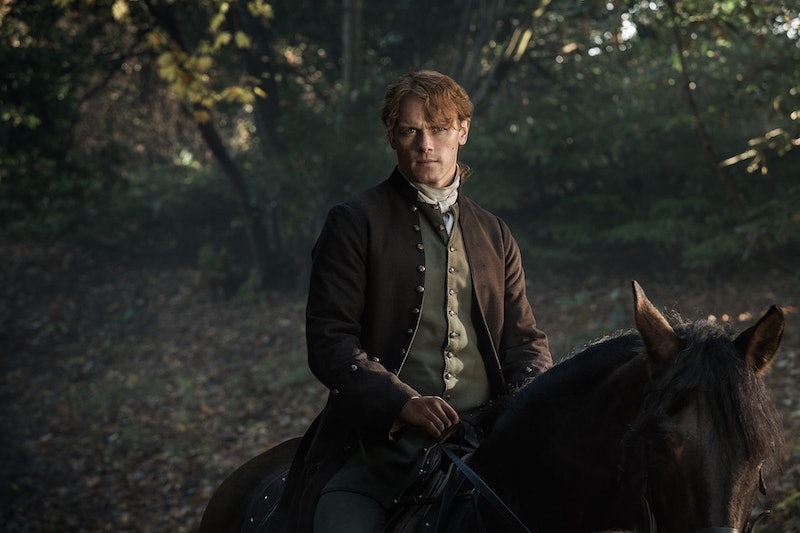 Breakups are usually rough, but you'd be hard-pressed to find one quite as wrenching as Jamie and Claire Fraser's at the end of Outlander Season 2. The finale sent Claire (Caitriona Balfe) back through the stones and into the era she'd come from, leaving Jamie alone in Outlander Season 3, trying to survive the Battle Of Culloden. It's no spoiler to say that he does — Claire found proof of this last season — but it seems that walking away from this bloody skirmish won't be the hardest trial Jamie faces when the season premieres Sept. 10. Once that's over, the Highlander will have to survive life. And the coming episodes will see Jamie Fraser hit his lowest point, according to Outlander star Sam Heughan.

"The one thing that kept him going was Claire," Heughan says, speaking to Bustle at a season premiere screening, "and she’s gone from his life. So he has no purpose to live."

Sorrow and trauma can't seem to leave Jamie Fraser alone, and he's not the only fictional hero who deals with such things. But Outlander does the character and the audience the service of letting Jamie not only suffer, but truly process what he's endured. Never forget that the show gave us one of the few male rape survivor stories told in such excruciating detail on TV. But throughout both his recovery from his abuse at the sadistic hands of Blackjack Randall and his grief at the loss of his and Claire's first child, Jamie had his partner and guiding light by his side. How's he supposed to get over losing Claire... without Claire?

"He’s really just living in the memory of Claire and happy to just kind of waste away, or die."

For Heughan, it all comes down to Jamie making peace with the fact that Claire kept him afloat. "I think it takes him a long time to realize that, to discover what he has to fight for, and live for," the actor says. "And it also comes down to his family. He does the best for them."

Jamie is undoubtedly close with his sister Jenny and her family. He also has a surrogate son of sorts in Fergus. Maybe it's just the idea of sparing them some pain that keeps him alive. But just barely so. The actor makes it clear that Jamie is just going through the motions. And while he may not have a death wish, per se, he would welcome his demise. He's a man who thinks his life is firmly in his past.

In her 1969 book, On Death And Dying, Elisabeth Kübler-Ross laid out what she determined to be the five universal stages of grief: Denial and Isolation, Anger, Bargaining, Depression, and Acceptance. She proposed that not every grieving person experiences these stages in order, and some people may not make it all the way through the process. (Though Heughan's comments indicate that Jamie will come full circle before Claire comes back into his life.) What's now called the "Kübler-Ross" model isn't upheld by the entire psychology community, though it has permeated the culture, becoming something of a household concept.

Whether these stages are as common as Kübler-Ross believed, Jamie's experience ought to be familiar to a portion of Outlander's audience. Just as the show provided some carefully considered points of identification for grieving parents and victims of sexual violence, his journey in Season 3 has the potential to strike a chord with anyone who's experienced the crushing and unexpected loss of a partner.

"It really is a really sad and interesting story for Jamie," Heughan promises. Though Outlander fans may spend the beginning of this season counting the minutes until the pair are reunited, they shouldn't sleep through Jamie and Claire's solo storylines. After all, what even is romance without a little angst?

In this particular chapter of the supernatural drama, that angst is linked to self-awareness and identity. "Who is Jamie without Claire?" Heughan asks. "And I think that’s the most interesting question. Who is he? And he has to find out himself."

As book fans are well aware, Jamie will attempt to distance himself from his former life in Season 3, trying anonymity on for size. Ironically, this disavowal of his former self could make it more difficult for Claire to track him down from her home in the '60s.

"He doesn’t want to be Jamie Fraser, he wants to be many other people," the actor says. "So he spends a long time kind of discovering himself."

It certainly sounds as if Outlander will take its time again here, honoring Jamie's emotions while other male leads on TV are required to hunker down and push through their pain. And that's important for any audience to see, because grief is as timeless as Sam Heughan's character and this particular love story.

More like this
At 28, Hilary Swank Was Prepping For 'Million Dollar Baby' & Hanging With Her Parrot
By Samantha Leach
Mike Flanagan Teases 'The Midnight Club' In This Exclusive, Creepy Clip
By Grace Wehniainen
Lauren Lyle Is Keeping The Contents Of Karen Pirie’s Bum Bag A Mystery
By El Hunt
There’s A Brand New Drag Race Spin-Off & It’s Dropping Very Soon
By Sam Ramsden
Get Even More From Bustle — Sign Up For The Newsletter