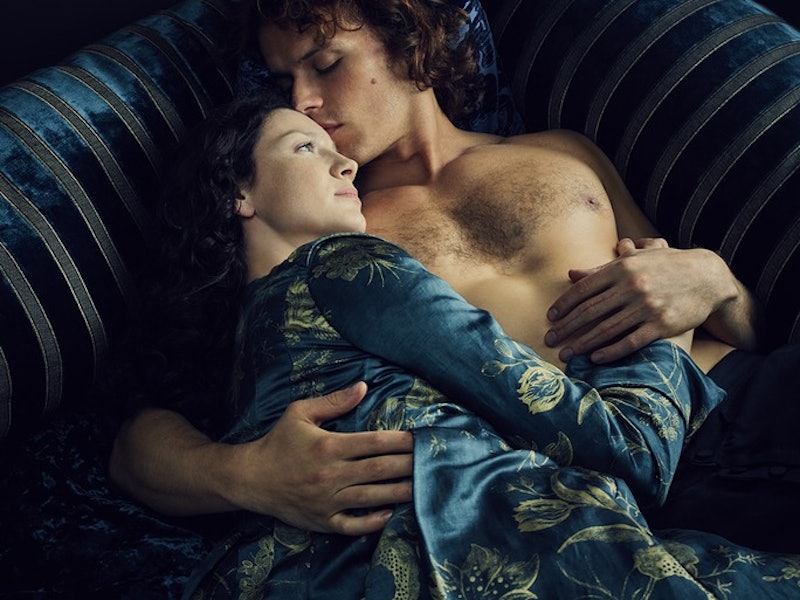 Well, folks, I'm sad to say it, but Droughtlander has officially commenced, which means we have many, many Fraser-less months ahead of us. But as grim as our immediate future appears to be, not all hope is lost. In fact, there are many ways to keep our Highlander spirits alive and well throughout this excruciating hiatus, one of which involves making Outlander Season 3 predictions. We know that the third installment will be largely based around author Diana Gabaldon's third book Voyager. However, executive producer Ronald D. Moore has hinted that this upcoming season will stray a little further away from the novels than usual, so even the most diehard book fans won't entirely know what's coming when Outlander Season 3 returns, which should keep things pretty interesting moving forward. Update: On Feb. 15, Deadline reported that Outlander Season 3 will premiere in September 2017.

Earlier: But, of course, viewers can still look to Voyager book spoilers for clues about what's to come regarding Jamie and Claire's future. And then there's always the Season 2 finale itself, which set us up for many different (and exciting) possibilities for the third season. So I've taken it upon myself to round up a few predictions about where I think things could go from here based on clues and my own personal preferences, all of which indicate that Season 3 could very well be the show's best one yet.

Claire Will Go Back Through The Stones

I mean, obviously this is going to happen. There's no way that after finding out Jamie survived the Battle of Culloden that Claire wouldn't go back to try and find him. As much as she loves her daughter, Brianna, Jamie is the love of her life and the opportunity to see him again after 20 years apart will be too tempting to pass up.

If you think Claire is immediately going to walk through those stones and see Jamie, think again. The writers are definitely going to build this moment up throughout the season and make us really wait for it. Sure, it's going to be painful, but it'll also make their reunion all the more satisfying.

They Won't Remain In Scotland

You don't have to read the books to put together that Voyager will center around, well, a voyage. So you can expect the two of them to set sail to parts unknown at some point throughout the season.

Flashbacks Will Play A Major Role

Given that 20 years have passed since these two were together, we as viewers have a lot to catch up on, which means flashbacks will be key. Plus, that's pretty much the only way we'll be able to see Tobias Menzies at this point since both Black Jack Randall and Frank are now dead. Don't worry, though, I'm sure the writers will want to include what Claire's life was like with Frank after Brianna was born, so we haven't seen the last Menzies' talent just yet.

As Claire found out in the finale, Geillis/Gillian believed that a human sacrifice is required in order to travel through the stones. And while Claire didn't seem to take this idea seriously, given that no one died when she went through the stones, I have a sneaking suspicion that this will come to be very important later on. Otherwise, why would the writers have made such a point of including it?

Fans may still have a long way to go before being able to quench their Droughtlander thirst, but at least we know that when it does eventually come back into our lives, it will (as always) prove to be well worth the wait.