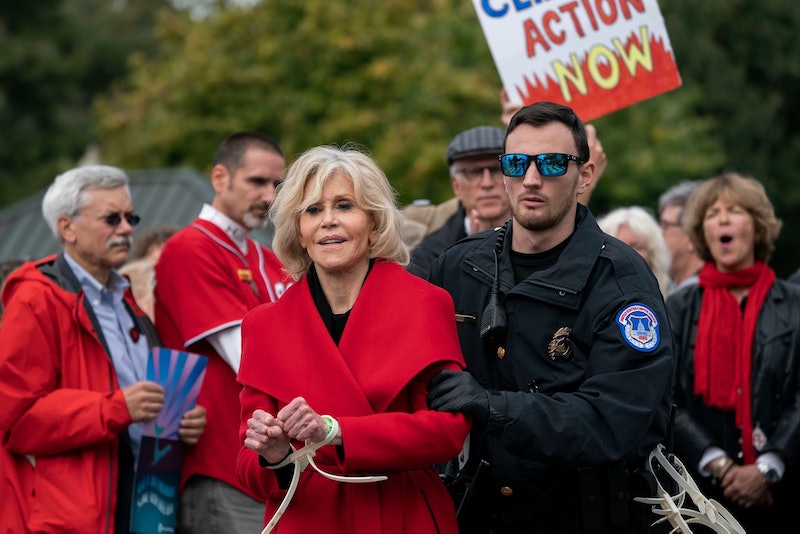 Jane Fonda is known just as much for her activism as she is for her impressive acting career, so it seems only appropriate that she would accept a lifetime achievement award while demonstrating her right to protest. On Friday, Oct. 25, Jane Fonda accepted a BAFTA Brittania Award while being arrested during her Washington D.C. protest about climate change. According to Variety, the two-time Oscar winner was set to be honored with the Stanley Kubrick award for excellence in film at BAFTA LA's annual celebration on Friday, but she was arrested earlier that day by U.S. Capitol Police.

Fonda was protesting in front of the U.S. Capitol Building as part of her Fire Drill Fridays, when she and 31 others — including The Good Place star Ted Danson — were arrested for for unlawful demonstration and charged with "crowding, obstructing or incommoding," according to a statement the Capitol Police gave to Bustle. The Fire Drill Fridays Twitter account explained that the group was "demanding the protection and restoration of our oceans," during Friday's protest.

However, the actor didn't let that stop her from sharing her gratitude to the BAFTA LA community, as a video of her arrest played at the event as part of her surprise acceptance speech. "Thank you BAFTA," Fonda says in the clip, while being handcuffed by Capitol police. "BAFTA, thank you for the Stanley Kubrick award for excellence in film. I’m sorry I’m not there, I’m very honored."

In addition to the short clip of Fonda accepting the award while being handcuffed, Variety reported that the actor also explained her commitment to climate change awareness in another video that was played at the BAFTA LA event. "I decided I need to do more about climate change," Fonda said in the video, which also featured footage of her protests. "And so I moved to DC for four months, trying to heighten the sense of urgency that there needs to be."

Friday's protest was the third week in a row that Fonda has clashed with Capitol Police while protesting; on Oct. 11 and again on Oct. 18, the actor was arrested in front of the Capitol Building during her climate change demonstrations. On Oct. 18, her Grace and Frankie costar Sam Waterston joined her and was arrested alongside her. However, the Oscar winner has made it clear that she is willing to be arrested as many times as possible in order to properly raise awareness for the climate crisis.

"I will be on the Capitol every Friday, rain or shine, inspired and emboldened by the incredible movement our youth have created," Fonda wrote on the Fire Drill Friday website. She credited activists like Greta Thunberg Reverend William Barber, and Randall Robinson as inspirations for her demonstrations, writing, "I can no longer stand by and let our elected officials ignore — and even worse, empower — the industries that are destroying our planet for profit. We can not continue to stand for this."

Fonda has been an outspoken activist since the 1960s, fighting for everything from Civil Rights to women's health to environmental causes. In a June interview with Vogue, Fonda credited her activism with helping her develop a "sense of self" as a young woman growing up in a tumultuous time. "It was more activism that that started to help me develop a sense of self," she explained. "And then I brought activism into my film acting work, and so they kind of came together."

Since Fonda's activism has become such an important element of her film career, it seems only appropriate that the actor would accept a lifetime achievement award while doing the other thing she is most known for: fighting for a cause she believes in.

More like this
Miss Thailand's Soda Tab Gown At The Miss Universe Pageant Had A Special Meaning
By Brad Witter
Twitter Is Identifying With Sally Field & Jane Fonda’s Friendship In New Viral Video
By Jake Viswanath
8 Charities To Donate To During Black History Month
By Alexis Morillo
Why We Love Investigating Friendship Breakups
By Carolyn Steber
Get Even More From Bustle — Sign Up For The Newsletter
From hair trends to relationship advice, our daily newsletter has everything you need to sound like a person who’s on TikTok, even if you aren’t.