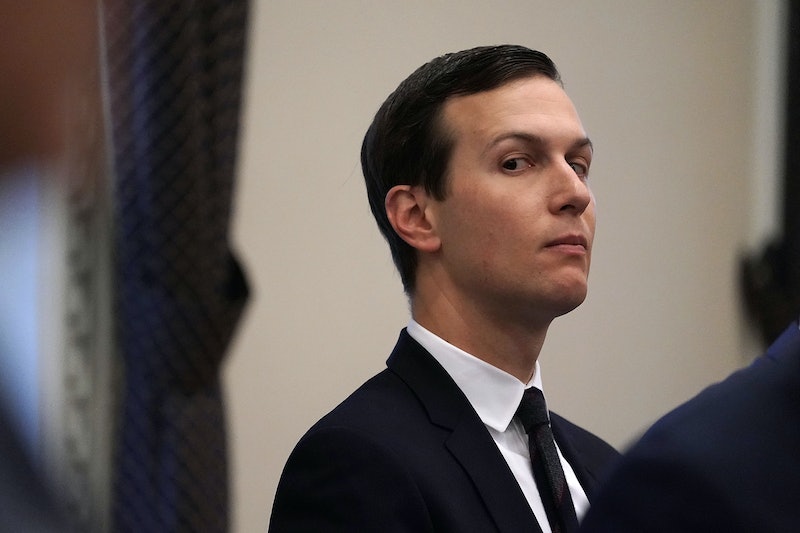 It's hard to define exactly what Jared Kushner does in the White House, because his father-in-law gave him so many different, heavy roles. However, there's at least one thing that's certain: Kushner doesn't often give interviews. He spoke to CNN on Monday, though, where he opened up on at least one personal front. Jared Kushner's focus on prison reform, he explained, comes from his own experience with the prison system.

"There was one issue that was very close to my heart because I had a personal experience, which was prison reform," Kushner told CNN's Van Jones at CNN's Citizen Conference. Kushner, of course, never spent time in prison himself. His father Charles Kushner, however, spent two years in federal prison, after pleading guilty to charges of tax evasion, making false statements to the FEC, and attempting to tamper with a federal witness. Because of his father's prison sentence, Jared got control over his father's company when he was only 24, according to Bloomberg.

As he explained to Jones, Kushner's take on the issue, based on the research that he did, is that without an emphasis on prison reform, people in the penitentiary system just learned "how to become better criminals," rather than actually reforming their ways.

Kushner told Jones, however, that after he'd already done the background work of researched the issue of prison reform and deciding what the best way to proceed was, he still had a significant hurdle to clear.

"I had one small problem, which is I hadn't spoken to the president about this," Kushner said. "If you're a business guy, [prison reform] doesn't really come up unless you have personal experience."

According to Kushner's read of the situation, Trump understood why it was an important issue and has now put some work into it. "The president’s tough. He can be tough on crime. He’s tough on a lot of things. But he also has a lot of compassion that not a lot of people get to see," Kushner told Jones. "This is an issue that really has his heart. I think he sees this as a fairness issue."

Kushner's work on prison reform did actually lead to a rare bipartisan success story in Washington, as The Hill wrote, when he and Democratic Congressman Hakeem Jeffries worked to push the First Step Act, a bill addressing prison reform, through the House in May. The bill is still waiting for Senate consideration, though, according to The Hill, so it hasn't ended up on the president's desk to be signed into law yet. While the decisions of what gets discuss on the Senate floor are up to Senate Majority Leader Mitch McConnell, some encouragement from the president could potentially speed the process along.

If this were to pass, it could add to the Trump administration's short list of major legislation created. And after a stormy first couple of months of 2018, Kushner saw his significant White House portfolio shrink — but even with his personal experience in the matter, he has not yet managed to enact change in the realm of prison reform.