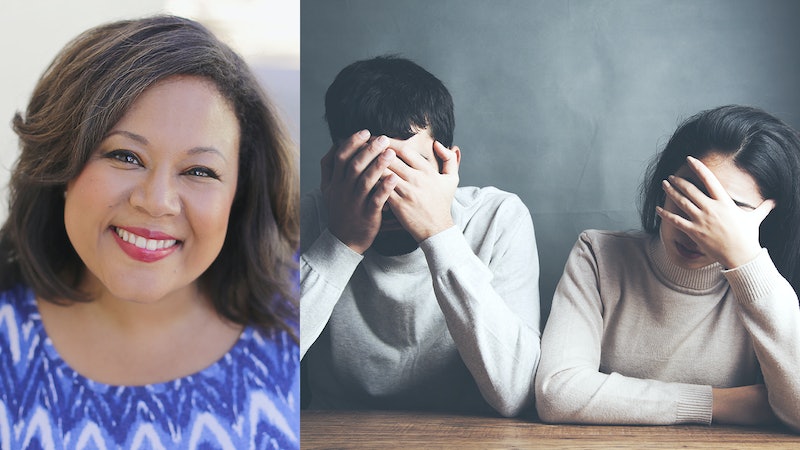 In the second installment of Bustle's Ask An Author column, The Proposal author Jasmine Guillory answers a letter from a reader who isn't so sure about the "low-grade sexism" creeping into her boyfriend's personality.

Each month, a different author will answer one of your questions about love, work, friendships, mental health, and more. If you have a question, submit your letter anonymously to Bustle for a chance to have it answered next month.

I need some impartial advice. My boyfriend would definitely self-identify as a feminist. When we first met in grad school, most of his friends were women, and I felt as comfortable with him as any of my friends who are women, whether it was talking politics or making "men are trash" jokes. But in the years since, he has settled into more male-dominated settings. His profession (academia) is mostly men. Maybe I'm imagining it, but I'm starting to feel like some low-grade sexism is creeping into his personality. Or maybe it was always there and I only just realized it.

It’s a combination of many tiny things that made me take notice. The way he describes women often feels just slightly “off” to me. For instance, he will tell me that a female colleague is "whip-smart" — I mean, duh. She's a professor? Or when he recently met a mutual friend's wife, he described her as having a great sense of humor because "she laughed at all my jokes!" We both travel a lot for work, and he often jokes about wanting to pack me up in his suitcase and bring me with him, which makes me feel like an emotional support animal. He rarely consumes media that is created by women; he’s big into film, podcasts, and gaming, but it's all men, all the time. Sometimes he will watch one of my shows with me or read a bit of a book I recommend to him, but I usually get the feeling he is humoring me. I'll push him a little bit sometimes, with mixed results. When I asked him if he would ever describe a man as "sharp as a tack," he got defensive, but stopped using the phrase. After sitting through a bunch of tedious dude-centric movies, I put a moratorium on anything with no significant women characters: I won't watch them with him anymore.

I work in entertainment with a ton of amazing women and non-binary creators, and I know there are too many stories in the world to engage with ones that don't reflect my humanity. But my boyfriend just watches the same movies by himself now. Pointing out the imbalance hasn't caused any change to his habits, just the extent to which he shares them with me.

Maybe I'm being judgmental. I'm not trying to win the feminist Olympics — I’ve said and done more than my share of problematic sh*t, and I'm trying to do better — nor do I want to police his interests. I know couples don't have to share every hobby in common. (He loves standup; I couldn't sit through an hour if you paid me.) But my life is full of amazing women — both in my IRL friend group and the media I work with and seek out — and I'm starting to feel reluctant to share that with him out of a feeling that he won't care. That he'll listen, but not out of real interest, just because that's what a good boyfriend does.

Yet whenever I start feeling squicky about this stuff, I can't help but think about my single friends and the genuine horror stories they've collected while trying to date men. It sounds bleak out there, and I feel lucky to have landed a guy who does genuinely respect women, even if he can be clueless from time to time. My question is: where's the line? Should I talk to him about this directly, keep showing him the women-created things I love and hope something catches, or just live and let live? I love him, but sometimes I feel like our interests are diverging and our common ground shrinking.

Your boyfriend seems to care only about giving lip service to feminism, but nothing you’ve said about him makes it seem like he actually cares about sexism, wants to improve the way he relates to women, or even respects women and their contributions to the world. He condescends about their intelligence, he consumes no media by or about women, he voluntarily spends time with no women other than you, and he gets defensive when you bring all of this up. But enough about your boyfriend – you know all of that. The real person at issue in this letter is you.

And that’s really the question: are you happy in this relationship? It doesn’t seem like it from your letter.

You’re with a man who you’re hesitant to share parts of your life with because you feel like he won’t care – that feels like a very lonely life to lead! I agree with you that partners don’t need to have the same interests, but other than an obligatory “I love him” at the end of your letter, there’s nothing in your letter that makes me think you even like your boyfriend, or enjoy spending time with him. You’re only still with him because you think that he’s better than lots of the other terrible men out there, and you don’t want to be single, but that’s such a depressing reason to stay in a relationship. You say that you feel lucky to have “landed” a guy who genuinely respects women; don’t set the bar so low that it’s actually on the ground! Just because your boyfriend throws out occasional compliments to his colleagues doesn’t mean you have to be grateful and feel lucky, and it really doesn’t mean you have to stay with him if you aren’t happy.

And that’s really the question: are you happy in this relationship? It doesn’t seem like it from your letter. Does he add anything to your life other than stress? Does thinking about him bring you joy? Maybe the answer is yes, and if so, then sure, address this issue with him head on instead of talking around it, tell him how much this bothers you, and see how he reacts. But if you don’t like his reaction, and you don’t want to be in a relationship forever where you feel stifled and unhappy and unable to share parts of yourself, why keep going in the relationship just because you think he’s better than some of the other options?

Why do you think you need this man in your life, when he seems to add nothing to it? It’s okay to be single!

And yes, there are lots of awful men out there in the world, but there are plenty of good ones, too – men who actively respect and appreciate women, even women they aren’t sleeping with or related to – but how are you going to find one of those if you’re stuck with this guy? Open yourself up to possibilities, instead of resigning yourself to be lonely with him forever.

And truly, it seems like you’ve made a great life for yourself without him – you work with a ton of smart, accomplished women, you have fantastic friends, you have a fulfilling work like – why do you think you need this man in your life, when he seems to add nothing to it? It’s okay to be single! It seems like you and your boyfriend have been together for a long time – you might need some time to yourself to see who you are and what you want and how you’ve changed since the two of you started dating. Take some time to enjoy all of the great things about being able to center yourself in your life, and enjoy the freedom of not being tied to another person. You don’t have to date this man or any of those terrible men out there! Go forth and hang out with all of the great women in your life, and be happy.

Jasmine Guillory is the New York Times bestselling author of The Proposal and The Wedding Date. Her new novel, The Wedding Party, will be released on July 16, 2019. She is a graduate of Wellesley College and Stanford Law School and lives in Oakland, CA. Her writing has been featured on Jezebel, Thrillist, and The Toast. Learn more at jasmineguillory.com and find her on Twitter @thebestjasmine and Instagram @jasminepics.

If you have a letter for Bustle's Ask An Author column, submit it anonymously for a chance to have it addressed by an author.