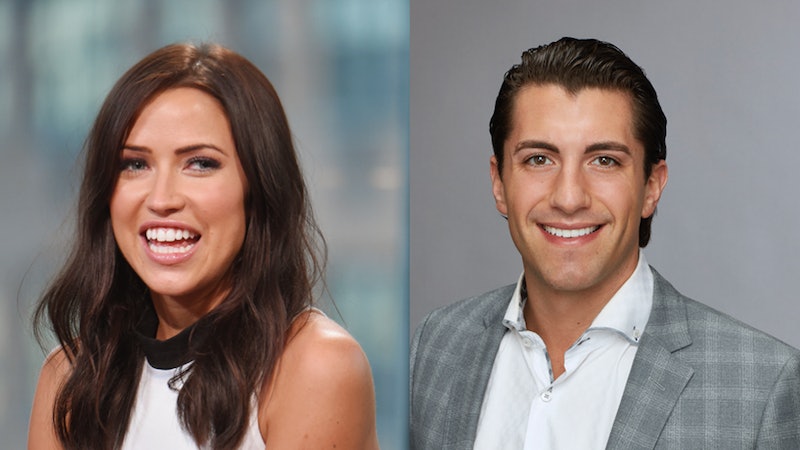 One of Bachelor Nation's favorite couples, Jason Tartick and Kaitlyn Bristowe, are still going super strong. In fact, they're going so strong that the former Bachelorette has even showed her boyfriend a place incredibly close to her heart. As seen on Instagram, Jason and Kaitlyn vacationed in Canada recently, and Off the Vine podcaster got to show her beau the lay of her native land.

Jason and Kaitlyn took yet another major step in their relationship together with their recent vacation to Canada (British Columbia, to be more specific). On his Instagram account on Aug. 29, Jason showcased the couple in their best golfing outfits during an excursion in Okanagan, British Columbia. He began his caption for the snap with, "It's the last day of what’s been an amazing month in Canada! In an attempt to earn my honorary citizenship, I have been astute with understanding some of day to day lingo."

As he went on to write, he definitely learned a thing or two from his girlfriend when it comes to any and all Canadian lingo. And, for any of my fellow Americans out there, it'll teach you a little something about Canadian slang, too. Jason detailed some of those rules by writing, "It’s spelled, “cheque” not “check”! We are NOT “taking” a shower or nap, we’re “having” a shower or nap. We “phone” someone, not “call” them."

He ended his caption with even more lingo info and a sweet note to Kaitlyn, "And last but not least, if it’s cold out head to Tim Hortons for a morning double double and if you want a beanie to keep you warm, you better ask for a Toque. It’s been a damn blessing, I love you with all my heart."

Kaitlyn and Jason have been linked together since January, which is when the two happened to go out on their first date. At the time Jason traveled out to Denver to take out the Bachelorette and the two then went out dancing with a group of friends. On his Instagram Story, he posted a clip of Kaitlyn dancing, which he captioned with, "Every date has a different definition of after dinner drinks [with] friends." He continued to write, "Sign me up for this definition."

"Kaitlyn and I got to a point where being across the entire country didn't make sense. I think that for the short term and the long term, Nashville was the best place for us to be. It puts us back on the east coast. I'll be a few hour-drive from my parents, quick drive from my brother, and, it puts us in a better position for short and long-term ... We're at the next step in our relationship, where we want to grow even more and we can't do that in long distance."

Kaitlyn and Jason (alongside their adorable dog, Ramen Noodle) are clearly enjoying taking these next steps in their relationship. And with Jason taking yet another step by becoming an "honorary" Canadian, I think it's safe to say that these two are officially Bachelor Nation's cutest couple.

More like this
'RHOP' Stars Robyn & Juan Reportedly Got Remarried & Filmed The Ceremony
By Brad Witter
Kylie Jenner Clarified How To Pronounce Her Son's New Name
By Jake Viswanath
Laura Anderson Pulled The Ultimate Girl Power After Her Break-Up
By El Hunt and Megan C. Hills
'Bling Empire: New York' Star Nam Laks Is The “Blair Waldorf Of Thailand”
By Alyssa Lapid
Get Even More From Bustle — Sign Up For The Newsletter
From hair trends to relationship advice, our daily newsletter has everything you need to sound like a person who’s on TikTok, even if you aren’t.