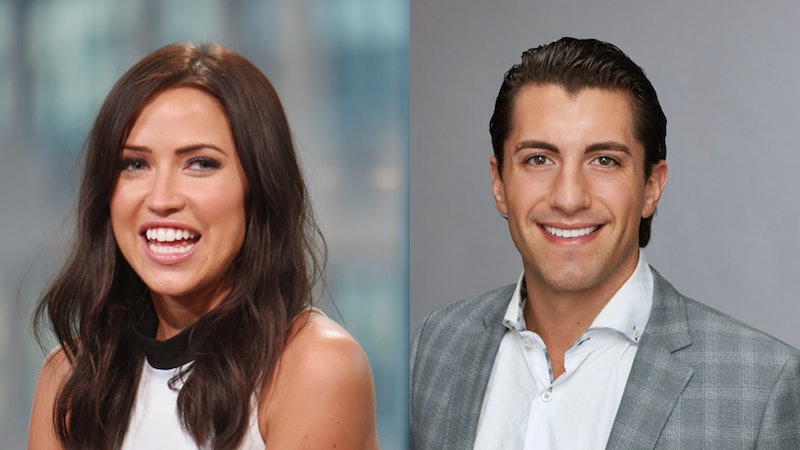 Bachelor fans everywhere will be happy to see that Kaitlyn Bristowe and Jason Tartick are still going strong. In fact, things are going so well for the pair's relationship that Kaitlyn and Jason had some fun on St. Patrick's Day together, as they shared on Instagram. And it just proves, once again, that this couple may just be one of the best in all of Bachelor Nation.

On March 17, Jason posted a photo from his St. Patrick's Day celebration with Kaitlyn. According to his caption for the post, it was his best celebration of the holiday yet, thanks to his fun day trip with his girlfriend and those nearest and dearest to her. The pair, along with one of Kaitlyn's besties, Bri Cook, and her adorable kiddos, had a day full of Candy Land, Coco, and everyone's favorite Sunday activity, brunch. Jason captioned his Instagram photo:

Celebrating St. Patrick's Day with some of Kaitlyn's closest friends and even posing as a "family" together for a holiday snap? That's definitely a big sign that Jason and Kaitlyn's relationship is truly flourishing.

Kaitlyn also chronicled their St. Patrick's Day fun on her own Instagram Story. She told her followers that everyone was planning on watching Coco together, but more than a few (including Jason) got in a bit of shut-eye during the film.

The Bachelorette alums clearly had a blast during their outing. And they kept the lovey-dovey moments coming, as seen on Jason's Instagram post. Kaitlyn commented on the photo of the group, "You're so good with kids I love it."

Her beau responded with some humor, as he recounted how his hangover didn't exactly mix with taking care of kids on a Sunday morning. He replied:

"they were such a treat! I learned several lessons w. the kid this weekend, the biggest one...hangovers don't agree w. the time the kids get up Sunday AM! Lesson learned."

This latest family hangout was pretty major for the couple, who have been dating for some time now. Back in January, Kaitlyn and Jason officially went on a date, as Entertainment Tonight reported. During the taping of one of the former Bachelorette's Off the Vine podcast episodes, Jason, along with fellow franchise alum Blake Horstmann, called into the program. After some back-and-forth flirting, Kaitlyn decided to ask her now-current boyfriend out on a date.

But, it wasn't until Feb. 13 that the two were Instagram official, with Jason posting a photo of himself and his significant other and writing, "So grateful for you," complete with a heart emoji. Kaitlyn responded to his post by commenting, "Well aren't you just the cutest thing ever" along with a heart emoji of her own.

While Kaitlyn and Jason have only been dating for a few months now, it's clear from their recent, family-friendly St. Patrick's Day celebrations, that they're definitely going strong.