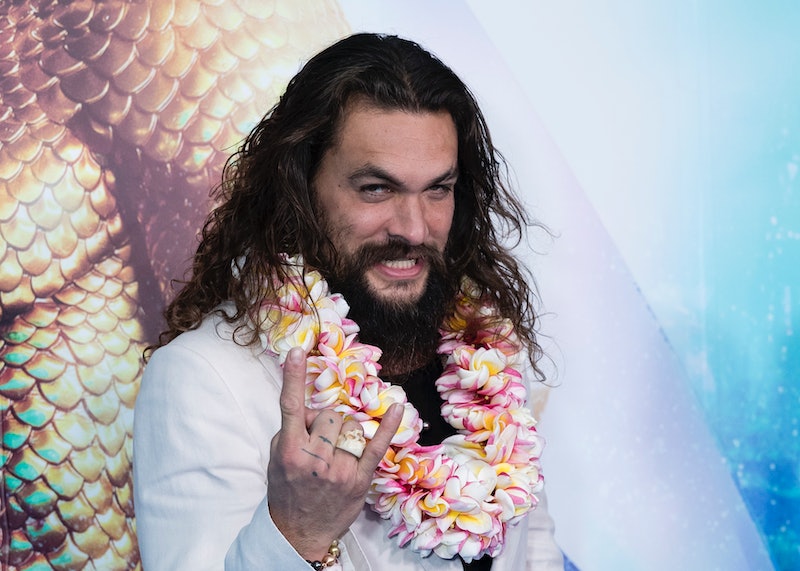 Some actors on Game of Thrones took home souvenirs from their time on the show, but one actor's keepsake was basically a spoil of war. In a recent interview with Entertainment Weekly, Jason Momoa revealed that he kept a gory souvenir from his time on Game of Thrones: the tongue that Khal Drogo ripped out of the throat of a member of his khalasar.

Fans of the show might remember the violent scene from Season 1, when the Khal defended his new wife, Daenerys (Emilia Clarke) from a member of his army in an incredibly bloody fight sequence. According to EW, the sequence — which was one of the first major departures from George R.R. Martin's books — was conceived by Momoa himself, who lobbied creators David Benioff and D.B. Weiss to give Khal Drogo a fight scene.

"I always wanted to see [Drogo] go to battle," Momoa told the magazine. "I didn’t want to do some elaborate fight scene. I think it’s [just as] intimidating to whisper in someone’s ear and go, 'Stop that.' You can just parry; I don’t need to do any fight moves. Then you just take the guy’s sword and slice his throat out." And, in a move that proved that the actor was truly connected to his character, Momoa decided to keep the tongue for himself. "I’m a big fan of taking the things that I worked with. So I have the souvenir of the tongue and the throat. That’s just on my desk." It's a keepsake would make Khal Drogo himself very proud.

"I was like, 'We can get a chicken breast, and we’ll just cover my hand in blood, and that’ll do it,'" Momoa explained of the way that he pitched the scene to Benioff and Weiss. "And then within days they had this f*cking throat and tongue attachment, and it looked amazing."

In addition to coming up with the scene in the first place, Momoa was also heavily involved in fine tuning the details of the fight between Drogo and the member of his khalasar. "He’s actually my stunt double from Conan [the Barbarian], who doesn’t speak English, but I had to teach him to speak Dothraki," Momoa explained to EW. "He spoke Bulgarian. It was challenging. The director was like, 'You hired him, you gotta teach him.'"

Even though he stopped playing Khal Drogo in 2011, Momoa's connection to the character has endured in such a way that the actor admitted in January 2018 that people are often surprised that he doesn't only speak Dothraki. During an appearance on The Tonight Show, Momoa told host Jimmy Fallon that when he met Fred Armisen, the Portlandia star told Momoa, "I didn't even know you spoke English."

And according to Momoa, Armisen isn't the only person who was surprised that the actor wasn't actually a Dothraki warlord in real life. "It was heartbreaking," he joked to Fallon, "I was like, 'That's why I'm not getting any jobs.'"

While Momoa may have had a hard time shaking the character of Khal Drogo after his time on Game of Thrones came to an end, some fans are still hoping that the actor will return to the fantasy epic when the final season premieres in April. In June 2018, Momoa was spotted hanging out with Benioff and Weiss in Belfast, Ireland, where Season 8 of Game of Thrones was filming, which set off a flurry of rumors that Khal Drogo would make one more appearance on the show before it came to an end.

However, Momoa seemed to shut down those rumors in December, while promoting Aquaman. According to TheWrap, the actor explained that "it's impossible" for Drogo to return to Westeros once more. "Ah, guys, I don’t know. He's dead," Momoa said on on SiriusXM’s Entertainment Weekly Radio. "I think I’m the only character in history to be dead for nine years and everyone still be like wanting. I love you, but he’s dead."

At least the Khal will always live on in the hearts of Game of Thrones fans everywhere — and through the very gross, very fitting souvenir that Momoa took from his time on set.