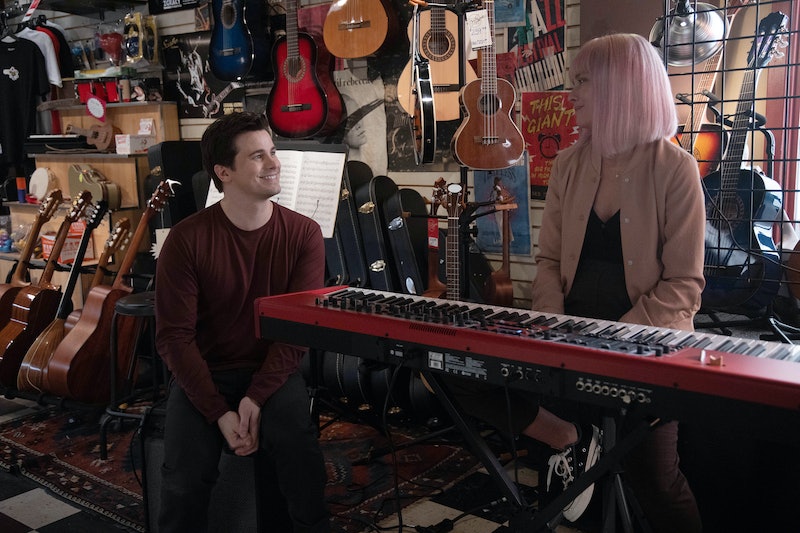 Jason Ritter is a great actor, but he's kind of messing a lot of things up as Eric on A Million Little Things. Honestly, it doesn't really even seem to be his fault. Maggie's mom Patricia dragged Eric into their lives and he's just trying to navigate it the best he can. Unfortunately things seem like they will only get worse before (and if) they get better, so fans may want Eric's Million Little Things episodes to come to an end. However, he's not going anywhere any time soon.

In the Oct. 17 episode, Maggie will finally learn who Eric really is — since he seems to be more than Patricia's boyfriend. The synopsis for the episode says that "Maggie is shocked to learn Eric's true identity," so it's bound to be a doozy of a reveal. However, it doesn't seem to be a deal breaker, whatever it is, because Maggie is hanging out with Eric in the very next episode.

There are photos of them on the press site for the Oct. 24 episode, titled "Austin." The pictures show them in a music shop together, and Eric is even encouraging Maggie to perform her music for an audience. He hands her a pink flyer in one photo and in another you can see that it's for an open mic night. Then they hug. Uh oh.

Maggie sure came to terms quickly with Eric's true identity and seems to be forming some kind of friendship with him. If he's not Patricia's boyfriend, could he potentially become Maggie's? The two shared some witty banter at a bar before they knew who each other was. Gary might have reason to worry, especially based on the upcoming episode synopses.

The Oct. 24 one says that "Gary feels disconnected from Maggie." That's the same episode where Eric and Maggie hug, so no wonder Gary feels disconnected. Maggie is out here striking up a friendship (and a potential romance) with a new man. Things get even worse for Gary and Maggie in the Oct. 31 episode, which says that "Gary's growing tension with Maggie comes to a head as she accidentally lets Colin out while she's on the phone with Eric." Come on, Maggie! Rookie mistake.

That's as far as the episode guide on the ABC press site goes, so Ritter is in at least the next three episodes. The actor would only say to TV Line that he's in a "handful" of episodes, but show creator DJ Nash has given fans a better timeline for Eric's story. He told Entertainment Weekly that Eric's storyline will continue long after his identity is revealed. "Throughout the first half of the season, we follow the question: Who is this person? And then once it's known who they are, their potential to shake up the world comes."

A Million Little Things Season 2 is 19 episodes long, so if Eric's story is in at least half the season as Nash hinted, Ritter is likely in at least seven more episodes, if not more. It seems he will shake things up for Patricia, Maggie, and Gary — and he may not even mean to. "I will say that Eric is doing a super-complicated, delicate sort of dance,” Ritter told TV Line. "He's trying to navigate a super-complicated situation, and he’s trying his best." That's nice and all, but Eric better leave Maggie and Gary alone and get out of there ASAP before he causes any lasting damage to one of the show's best couples. Just saying.