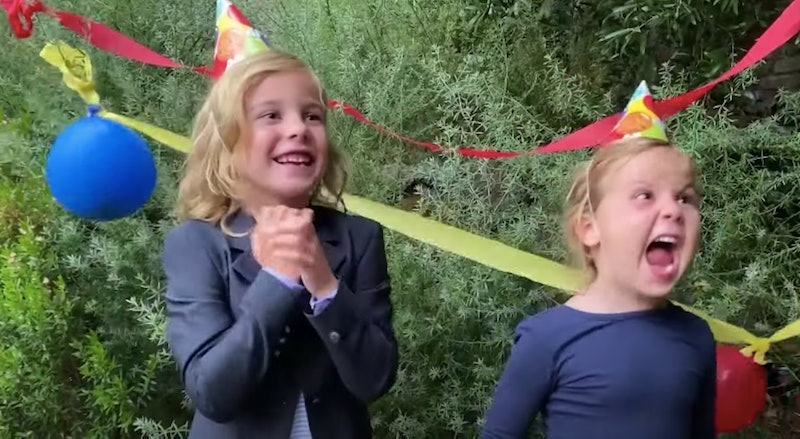 Studio 8H may be vacant due to COVID-19, but new Saturday Night Live sketches are still being produced — sort of. Jason Sudeikis and Seth Meyers’ kids starred in a cut SNL sketch titled “Unicorn," which aired on Monday night. In the Second Chance Theatre segment for Late Night With Seth Meyers, Sudeikis and Olivia Wilde’ children, Otis, 6, and Daisy, 3, and Meyers’ children, Ashe, 4, and Axel, 2, resurrected a scrapped sketch penned by SNL writer Mike O’Brien about a unicorn with pink eye. Filmed across three different backyards due to quarantine, “Unicorn” also stars Sudeikis and O’Brien as a father and a unicorn caregiver, respectively.

The sketch begins with Sudeikis as he gifts his four children their own pet unicorns during a birthday party. However, his dreams to give his children the perfect gift are ultimately shattered when the unicorns turn out to be “the nightmare of all gifts,” per Meyers’ narration. “Now I wasn’t able to find you a Slip ‘N Slide like you wanted, but I was able to track down a real living unicorn!” Sudeikis says in the clip. Between the excited screams and the kids’ deciding on a name for their unicorn, however, the unicorns contract pink eye and inevitably infect the children, too. Sudeikis and O’Brien then consider ways to euthanize the unicorns.

Finally, a solution: “I want you all to hop on a unicorn, and we’re going to ride toward that cliff over yonder,” Sudeikis says towards the end of the sketch. “No matter what, don’t stop riding.” So, it's not the best SNL sketch, but no one can deny that the kids are natural comedians.

In a post-sketch interview with Meyers, O’Brien explained that the sketch was initially written in 2010 for Betty White. White’s bit as a “cold animal euthanizer” almost ran, too, but her manager stopped it in its tracks. “I got called into her dressing room. It had gone well on Wednesday, and I assumed that she liked that it was getting laughs and people were nice about it,” O’Brien recounted. “I got called into her dressing room on Friday or Saturday, and her manager, who’s much older than her, started to lay into me and slapping the coffee table saying, ‘We said no animals!’” He added, “I was just flabbergasted. We didn’t have an actual horse playing the unicorn even. It was always a very fake stuffed animal.”

Otis, Daisy, Ashe, and Axel aren’t the only tots to have infiltrated their famous parents’ late-night show appearances in light of at-home filming due to production shutdowns. Jimmy Fallon’s daughters Winnie, 6, and Frances, 5, have become regular fixtures on The Tonight Show; and Jimmy Kimmel’s children Jane, 5, and Billy, 3, have also made cameos on Jimmy Kimmel Live! Let's hope these delightful late-night cameos keep coming — so long as no stuffed unicorns are harmed.

More like this
Who Is 'Stranger Things 4' Fan-Favorite Joseph Quinn Dating IRL?
By Grace Wehniainen
Sadie Sink Would Escape Vecna From 'Stranger Things' With This Taylor Swift Song
By Grace Wehniainen
Zooey Deschanel Can't Be Anyone But Herself
By Samantha Leach
You'll Never Guess Which Hollywood A-Lister Big Mo Is Related To IRL
By Sam Ramsden
Get Even More From Bustle — Sign Up For The Newsletter