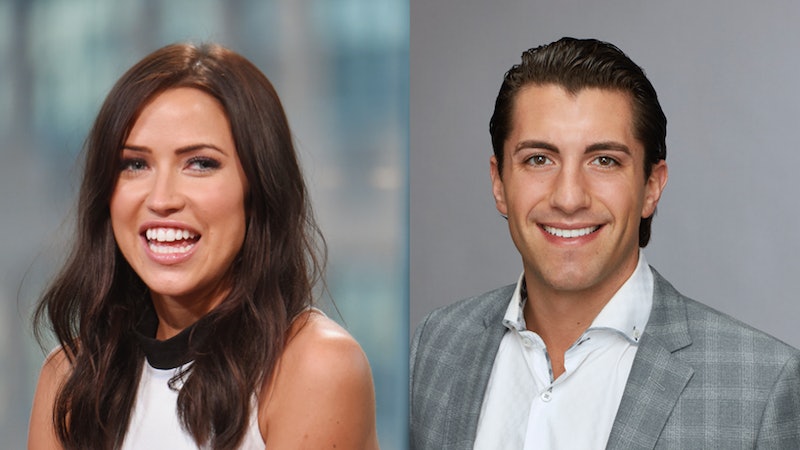 But were there roses involved? Jason Tartick and Kaitlyn's Bristowe's Valentine's Day celebration was as silly as it was romantic. For their first time celebrating the holiday together, the Bachelor alums planned a Boston getaway — and documented it for Bachelor Nation, too, of course. First up on their V-day itinerary: a fancy dinner at Bistro Du Midi. Per People, Kaitlyn even posted a video of her new boyfriend sweetly blowing her a kiss during their dinner.

And it sounds like they chose an appropriate venue. "With sweeping views of the Public Garden, Bistro du Midi is the perfect romantic setting for Valentine's Day," the restaurant boasts on its website, also noting an offering of a special five-course prix fixe menu for that particular evening.

The party really got started, however, back in their suite at the Boston Harbor Hotel, where the couple, who confirmed their relationship in January, had their own private singalong to to the Hamilton and Aladdin soundtracks, also per People.

The fun and games didn't stop there. The following night, the pair each used their IG stories document some friends joining them in their hotel room for a game of Monopoly (Jason won, by the way), a little tequila, and for more singing, of course. This time, however, they steered away from Broadway, opting for songs like Guns N' Roses "Sweet Child of Mine" and Zac Brown Band's "Chicken Fried," which elicited a hilariously animated performance from the group.

Once their vocal cords were amply warmed up, everyone ventured out to engage in some karaoke. One their set list: Bonnie Tyler's "Total Eclipse of the Heart" and The Killers' "All These Things That I've Done." And, yes, Jason shared the A+ performances on Instagram, for all to see and enjoy. (When's the album dropping, guys?)

So now that fans know they've definitely met each other's friends, it seems the relationship is going full steam ahead, even after just a few months. When confirming their relationship during a joint January appearance on the Today show, Kaitlyn said they'd been together for "a month or so." Added Jason, “We were friends. A little banter here and there and friendship turned into a relationship.”

While they may have made their dating status official on Today, Jason and Kaitlyn made their relationship Instagram official right before Valentine's day. "So grateful for you ❤️" Jason captioned a photo of him and his new girlfriend on Feb. 13.

The Off the Vine with Kaitlyn Bristowe host followed suit with her own selfie with Jason, both all dressed up and smiling. Following a lengthy caption (which Kaitlyn noted was written by Bianca Sparacino) about self-love and finding happiness, she concluded "Thank you @jason_tartick for being you."

She, of course, had gone through her own heartbreak recently, confirming in November that she'd split from fiancé Shawn Booth, who proposed on the Season 19 finale of The Bachelorette in 2015.

"It’s actually so strange to go from being engaged to thinking of someone as your boyfriend because I feel like that’s taking a step backwards — it’s not," she said on an episode of her podcast. "If anything, it’s taking a step forward because you’re just growing and evolving as a person."

And, judging by their Valentine's Day fun, it seems their relationship is continuing to evolve as well.