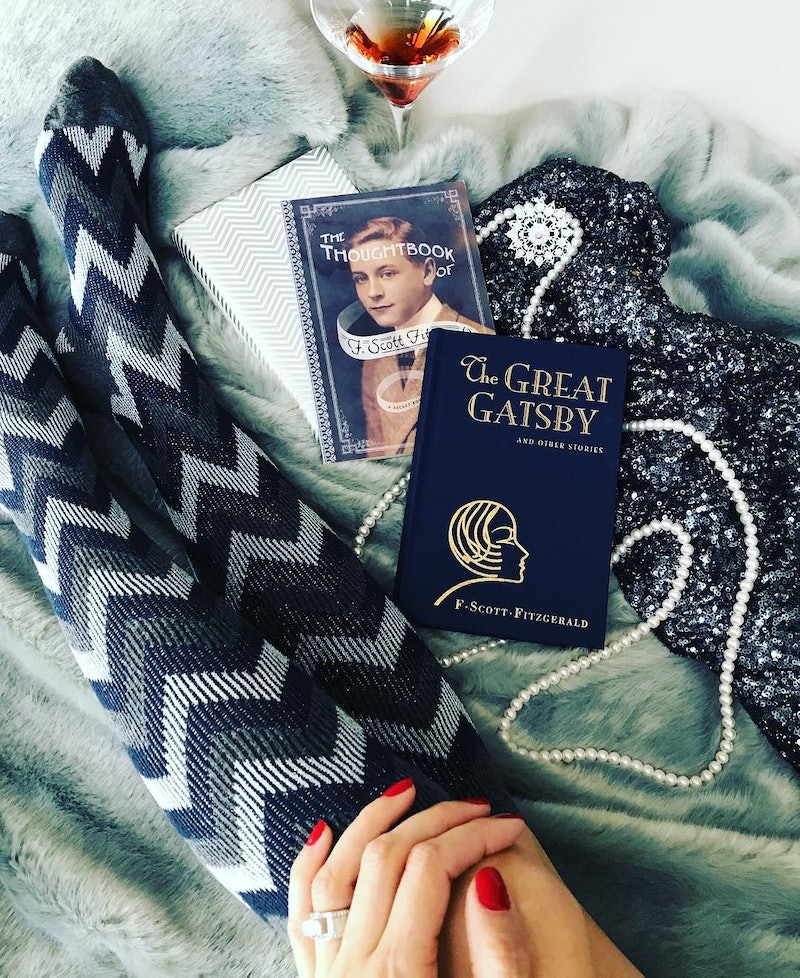 If you’re reading this while attending a Great Gatsby party, you might want to put down your champagne flute, because I’m about to compare Jay Gatsby to the 45th president of the United States.

Now, before you take to Twitter with your Gatsby defense and/or flapper-inspired style-guide, let me say that I am not slamming The Great Gatsby itself. I don't even mean to say that Gatsby is a bad character—he is well written, interesting, and even sympathetic. He's just not a romantic hero. He's a Great man but not a good man. He's not in love with Daisy, he's in love with the idea of her, the idea of money, and the distant green glow of his own idealized past.

F. Scott Fitzgerald may not have known that the Great Depression was right around the corner from the opulence of the Jazz Age, but his book sure reads like it. Far from writing a tragedy of lost love, Fitzgerald's novel is a critique of the American Dream, of the very concept of "greatness," and of nostalgia.

Or, to put it more simple, Gatsby wants to make America Great Again. At least, he wants to make his own personal America great again, by re-capturing a relationship he had five years ago through the relentless pursuit of wealth and beautiful shirts.

For the first part of The Great Gatsby, we're just getting to know our titular character through the eyes of Nick Carraway. Gatsby seems charming, confident, and debonair to Nick. It's only once we get to know Gatsby better that he's revealed to be hopefully naive — everything he's done, all the money he's earned through bootlegging (even though he doesn't drink), and his impressive library (of unread books), and his swimming pool (that he's never used); it's all for Daisy. Daisy, who he dated for like a month. Five years ago. When she was 18.

Gatsby then went away to the army, and Daisy married Tom Buchanan, an Olympic-level racist and old money rich guy. They moved into a grotesque mansion, had a baby, and went on with their rich, careless lives.

Rather than accept Daisy's "Hey I married someone else" as an answer, Gatsby decided to dedicate his life to achieving the American Dream of ludicrous wealth. He made it big in the seedy underbelly of New York during Prohibition, and moved into a new money mansion as close to Daisy as physical possible with the goal of winning her back at all costs.

So... there's a lot there. Like how America is nominally a classless society that actually has a fixed aristocracy of old money, or how Daisy knowingly participates in her own oppression by choosing to be a "beautiful little fool" 'cuz it's just way easier than dealing with reality... but let's stick to Gatsby.

Gatsby does not think of Daisy as a human person. If he did, he might have heard, "We're broken up and I got married," as a clear and resounding "NO." But he doesn't. He does not respect Daisy's decisions. Daisy isn't a particularly good or empathetic person, but she still has a right to, y'know, not date Gatsby if she doesn't want to.

He wants Daisy to be his and his alone—it's not good enough that Daisy loves him, he needs her to never have loved Tom even a little bit. (Never mind her baby, who she's probably at least a little fond of.) He wants her to be the innocent, hot, rich 18-year-old he fell in love with, who's never had feelings for anyone else. Daisy, of course, can't do that—she likes to play dumb, but it's a tall order to play the part of all of Gatsby's dreams about wealth and success rolled up into a person.

Essentially, Gatsby wants to repeat the past.

Oh, Gatsby. Not only can you not repeat the past, you probably shouldn't. Gatsby is only remembering the nice parts of the past, after all: a hot rich girl liked him, and it made him feel wealthy and powerful. He's blocking out the part where he was born into poverty, or where said rich girl dumped him, or where soldiers were dying in trenches while Tom and Daisy were swanning around being wealthy.

Fantasizing about the nice parts of the past and ignoring the nasty parts doesn't work out, though. Nor does prioritizing flashy Greatness over humdrum goodness. Hence why Gatsby's nice shirts and millions of dollars don't save him from getting murdered while taking the blame for Daisy's careless driving.

No amount of idealizing the "great" past is going to help you move forward. You're just going to end up backsliding.

Or, as the famous final words of The Great Gatsby put it:

So we beat on, boats against the current, borne back ceaselessly into the past.

Nick Carraway (care-away... get it?) is pretty forgiving of Gatsby, in the end. This is probably because Nick seems to have a big ol' crush on Gatsby from the get-go:

"Gatsby turned out all right at the end; it is what preyed on Gatsby, what foul dust floated in the wake of his dreams that temporarily closed out my interest in the abortive sorrows and short-winded elations of men."

To translate Nick's pretensions, Gatsby himself wasn't a totally irredeemable monster, it was the "foul dust" of the American Dream that ruined everything. And while I might give Gatsby a tad more responsibility for his own demise, it seems like Fitzgerald is slipping in a reminder here:

It's not hopes or dreams themselves that are the enemy. It's just that you should have better dreams than "reclaim an imaginary past that never really existed" or "get so rich that I can easily stalk my ex-girlfriend.”

In short: don't be a Gatsby. Being Great isn't all that good.

More like this
The 'Lady Chatterley's Lover' Book Leaves Us With A Troubling Question
By Catharina Cheung
The 'Firefly Lane' Book Ending Teases Way More Tears To Come In 2023
By K.W. Colyard
'Bridgerton' S3 Teases Exciting Social Season For Penelope Featherington
By Bustle
Hugh Jackman Shared The Sweetest Tribute To His “Extraordinary” Wife
By El Hunt
Get Even More From Bustle — Sign Up For The Newsletter