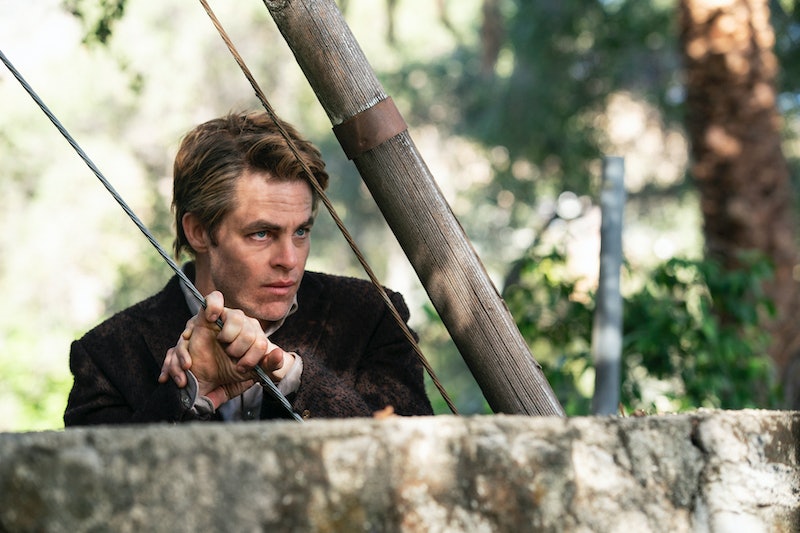 Though it's inspired by true events, TNT's new series I Am the Night does take a few creative liberties as it dives into the mystery of the Black Dahlia murder. For example, the character of Jay Singletary wasn't a real person, but instead a conglomeration of actual people crafted to propel the story. "I went home and told my husband — who I’d tried to get to write [this show] many times before, but he couldn’t totally figure it out," Jenkins told GQ. "And he said, 'Wait. There's something I was always trying to figure out. And I could represent it by combining a bunch of [actual] people into a character that would be great for Chris.' He started writing, and here we are."

Jay is a disgraced reporter who hopes to turn his career around by helping Fauna Hodel (India Eisley) figure out her family history. Fauna's character actually is based on a real person of the same name, and the show is loosely based on her 2008 memoir. She was the granddaughter of Dr. George Hodel, a doctor in the Los Angeles area who came under investigation for the murder of Elizabeth Short, aka the Black Dahlia, according to The Los Angeles Times. George was never charged in the case, but his son, Steve, has long maintained he believes his father was responsible for Short's death, and that he allegedly killed other women, too.

But even though Jay's roots aren't firmly planted in reality like the Hodels' are, Pine said he was instantly drawn to the role. "I was immediately intrigued by it: The late '60s, the milieu and the aesthetics. And the fact that we were shooting in L.A., on film, with Patty. It sounded like a blast," he said in the same GQ interview. "The Black Dahlia of it all, the Hodel of it, the Sowden House—all of it was interesting, I guess, in a macabre, sexy way. All the L.A. history of it. But really, what drew me to it was playing a character at the highest stakes possible, at 150 miles per hour, for six episodes. No nuance. Just Jay being an absolutely effing maniac."

This isn't the first time Pine has worked with Jenkins; she also directed Wonder Woman, in which he starred, and he seems eager to continue collaborating with her. "I found Patty at a time in my life when I was searching for deeper resonance with the material," Pine told Variety. "It's about witnessing and being witnessed. As a friend, Patty does that, and as a creator she helps me see aspects of myself that I usually don't notice."

It sounds like Jay's character will be struggling throughout the show. "He's somebody who knows he'll never be anybody in the world and trying to come to terms with that," Jenkins said in the same Variety article. "Where do you go from there? How do you crawl yourself out? What wakes you back up to find the fighter?"

Though I Am the Night's appeal is certainly heightened by the fact that it's based on a true story, one thing that might actually be enhanced by fiction is the element of surprise. With the Hodels, a quick Google search can tell you all you need to know about the family's controversies. The Black Dahlia murder is one of the most famous unsolved crimes in the world, and notes on the investigation are everywhere. But with Jay, viewers can't be sure where his fate lies at the end of these six episodes — it's solely up to where Jenkins and her crew decide to take his story.

More like this
'The Ex-Wife’s First Look Pics Are Giving 'Gone Girl' Vibes
By Bustle UK
How Much Are The 'Schitt’s Creek' Stars Worth?
By Hugh McIntyre
The ‘Kevin Can F**k Himself’ Season 2 Finale Twist Is A Full Circle Moment
By Grace Wehniainen
Did 'Grey’s Anatomy' Just Drop A Major Taylor Swift Easter Egg?
By Grace Wehniainen
Get Even More From Bustle — Sign Up For The Newsletter