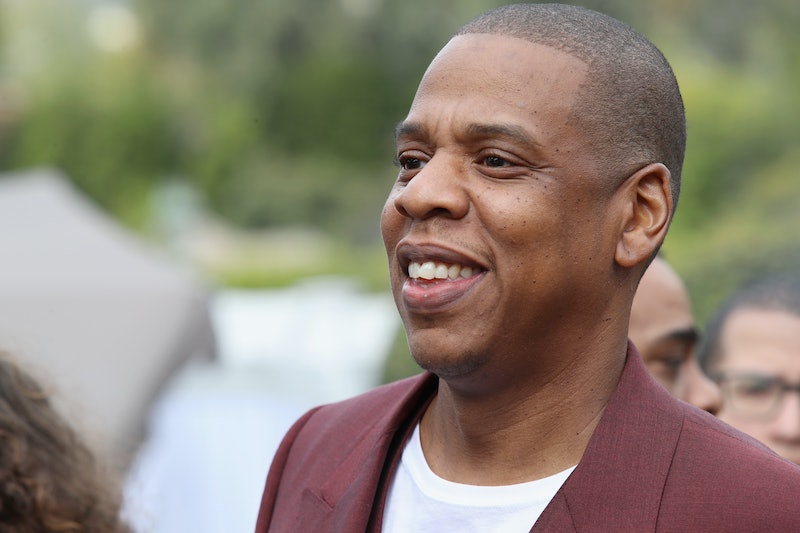 He may be Mr. Beyoncé Knowles sitting atop a vast rap empire, but Jay Z is still a mere mortal. On Thursday, Jay Z went on an endearingly confused Twitter spree that exposed him as peak dad. After becoming the first rapper inducted into the Songwriters Hall of Fame, Hova skipped the ceremony (probably because Bey is uberpregs) and expressed his gratitude to those who influenced him through tweets instead. Jay is not so good with social media, but his confusion and ineptitude at Twitter made his shout-outs even sweeter. He tried so hard!

In a series of tweets that really do ooze love and gratitude, Mr. Carter thanked dozens of his influences, including Ice Cube, Nas, Kendrick Lamar, 2Pac, Biggie, Rakim, Kanye West, Lauryn Hill, Nicki Minaj, and Wu Tang Clan. Give it up for Jay Z, because he really did make an effort to thank all his friends, influences, and collaborators in the industry.

But the tweets themselves are hilarious. The grammar is all over the place — and not in a purposeful subversive way, just in a dad-using-technology way. There's spaces before and after periods and lots of stream of consciousness interjections. For example, a few of the tweets end with "wait" as if people would not read the next tweet had he not asked them to hold on a second. BLESS.

But as bad as dad Jay Z is at Twitter, he is, at least, very aware of his shortcomings, to his credit. Here's an adorable tweet in the middle of his spree: "Okay I'm done. I'm deleting this app in the morning. Sh*t is impossible to get right." But you're trying, Jay, and that's what matters. He even assures people that he wasn't drunk, and that makes me kinda sad, because it means Dad Z knows he's not hip to the social media of the day. In fact, he doesn't even have an avatar... or a header image... or a Twitter bio. If not for that blue checkmark, you'd think Jay's Twitter was a fake.

His sincerity is all real, though, and beyond thanking his famous influences he also shouts out to the everyman: "Salute to anybody who made a song to feed their family or just vent." I love that the first part of that tweet, though, is Jay Z asking followers to "find that reply I just hit please." You crazy for this one, Jay.

Perhaps cutest of all is the tweet thanking former president Barack Obama, who appeared at the ceremony via video to give a tribute to Jay Z and help induct him into the hall of fame. In his tweet thanking Obama, Jay includes not a YouTube video link of Obama's speech, but a Dropbox link. Dropbox! Like he's trying to share a Powerpoint with his Philosophy 101 discussion group. I love Dad Z on Twitter.

Jay really did do the most to make sure his fans and followers knew how grateful he was, even if it was evident he struggled through the whole process. Not sure why he didn't just ask Bey for a little help. (Maybe she's in labor?!) Congrats Jay, for your induction, your babies on the way, and A for effort on Twitter.