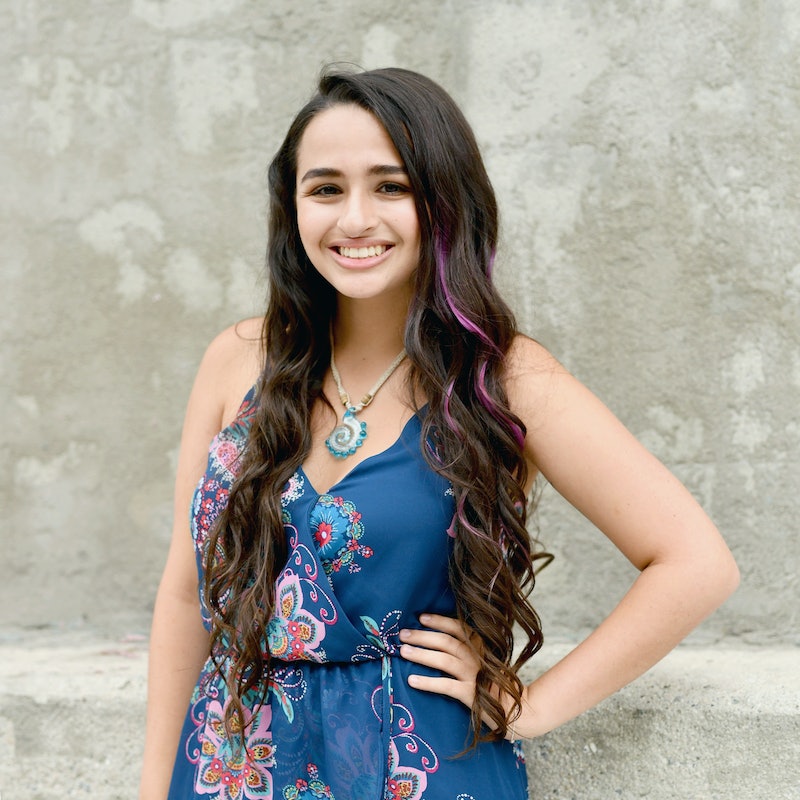 Jazz Jennings is officially headed to college, and the I Am Jazz star couldn't be more stoked. According to People, Jennings is going to Harvard University, and she's thrilled to join the Ivy League. The teenage transgender activist will be a member of Harvard's class of 2023.

Jennings confirmed the news on Tuesday, May 14, posting an Instagram photo in a Harvard sweatshirt. "I am so stoked for this next chapter of my life! ☺️ Feeling so blessed and grateful right now🙏🏽❤️," she wrote in her caption. "Thank you so much to my incredible family for your unconditional love and support; none of this would be possible without all of you. I can't wait for what's to come!"

The reality star also released a TLC video to show her excitement about the college acceptance. "When I found out I got accepted to Harvard, I was just so shocked," Jennings said in the clip. "Not because I didn't think I could do it, but just 'cause it's such a selective school with such a small acceptance rate, that I was like 'Who gets into Harvard?' But I got in! And now I'm going."

Jennings went on to share how honored she was to be attending the university in the fall. "I just feel so grateful to have this opportunity to attend an institution that's so incredible and well-renowned," she said in the video. "I just feel like I'm gonna just be me, do me, and have a great time."

And while her exact major isn't clear, Jennings has a pretty good idea of what she's interested in. "I'm hoping to major in philosophy, gender, and religion," she said in the video. Harvard has undergraduate concentrations in Women, Gender, and Sexuality, as well as in philosophy and in the Comparative Study of Religion, so she'll have plenty of course options to choose from.

During an interview with People in March, Jennings said that she'd also been considering attending Pomona College and Princeton University, but Harvard was always at the front of her mind. "I did have an interview with Harvard and I think it went really well. I'm hoping that they will accept me, because it's definitely one of my top choices," Jennings told the magazine at the time.

Fans will probably get an inside look at Jennings' adjustment to campus life, too. According to TheWrap, I Am Jazz is coming back next year, so that means future seasons of the TLC reality show might include details about her Harvard experience.

Jennings seems genuinely excited about the next stage of her life, and she'll be a great asset to the Harvard campus. She won't be the only famous face at the university, either — Malia Obama and Yara Shahidi are Harvard students, too. Whatever Jennings decides to study, she's going into the college experience with an open mind and heart, which is definitely the right attitude to have.