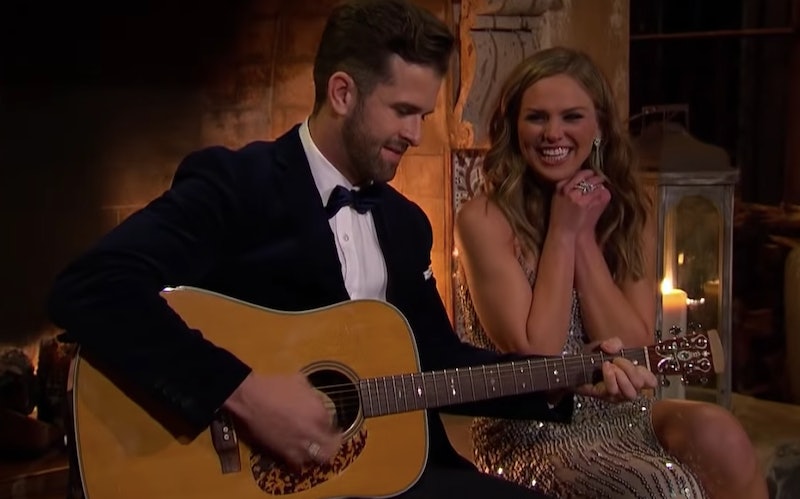 It didn't take long for fans to hear Jed's music on The Bachelorette. On night one, when the men typically arrive with gimmicky costumes and cheesy puns, Jed instead pulled out his guitar and played a silly tune for Hannah dedicated to her love for Alabama University football. And that was just the first of many performances he's given on the show so far.

Musician Jed made another appearance during the season's first group date, the Mr. Right competition. The guys had to perform a talent for Hannah, and naturally, Jed chose to sing and play the guitar. Unfortunately, it didn't win him the crown, but that didn't keep him from strumming on.

To end their first one-on-one, Jed made a confession to Hannah that he initially planned to take advantage of the exposure The Bachelorette provided for his music, but he assured her that he had a change of heart and was now on the show for her. Still, a look at his unaired season intro — which prominently features him playing and carrying around his guitar — makes his original intentions pretty clear.

"Finding your person on a TV show would just be wild," he said in the video. "I think that would be a great story. And a lot of people would know your story... save you some time." He cut himself off with an embarrassed, breathy laugh.

As the season progresses, Jed has continued to take every opportunity he can to play the guitar and sing on camera — including his latest Romeo-style serenade in Latvia and the group singalong that rolled during the episode's end credits.

He's also been sharing Bachelorette-related jingles as he watches the season back with the rest of the country. His latest is one called, "Salmon Jacket," in reference to the salmon-colored blazer that's being passed around the house and worn by many of the guys. "It's floatin' around like a ghost in the wind," he sings. "Every rose ceremony it's back again. You never really know who might have to have it. It's the mystery of the salmon jacket." The caption of the video referenced potential new music on the way. "This is not a part of the new new," he wrote. "But I mean who knows?"

Jed's latest professional release, "Vacation" dropped in 2018 and is available on Spotify, iTunes, and Google Play. His two previous singles, "Misery" and "Let Me Dream," released in 2017 and 2016, respectively, are also available for streaming. According to his website, he plans to tour his music "throughout Nashville and globally" in 2019.

Jed recently shared on Instagram that he performed at CMA Fest in Nashville. "CMA Fest was a blast!" he wrote. "Thank you so much to everyone who took the time to come out and support me and all the other dreamers out here in Nashville. Y'all made me feel special."

So, regardless of where his relationship with Hannah ends up at the end of The Bachelorette, his love affair with music is certainly still going strong.