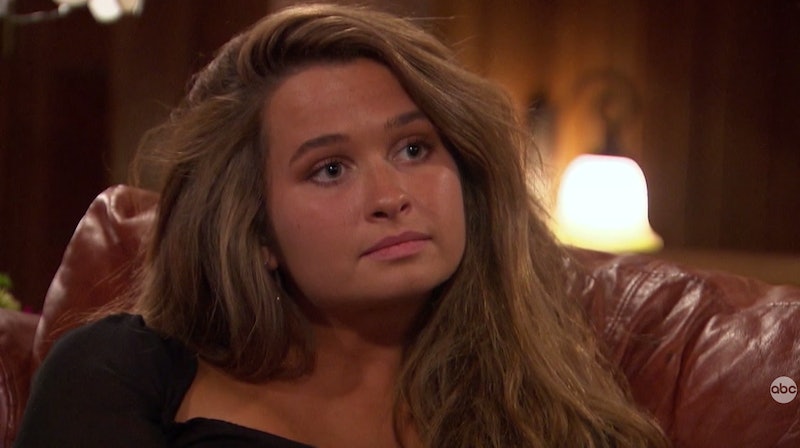 Jed Wyatt's hometown date with Hannah Brown was pretty tough to watch. And it wasn't just because of the accusations that Jed's ex Haley Stevens made once this season of The Bachelorette started airing. His family seemed so uncomfortable during Hannah's visit. But there had to be some better moments than what fans saw, right? Well, Jed's sister Lily weighed in on her Bachelorette portrayal via social media, and she swears it went better than it looked.

When Jed walked Hannah to the car after the date, he remarked, "It was such a beautiful day. Everything just worked out so good." Did it, though? Hannah sure didn't feel that way. She cried during her on-camera interview and admitted, "Tonight did not go like I expected it would go. I did not get the validation that I thought I would get."

She didn't appear to get that validation from anyone in the Wyatt family. But after the episode aired, Jed's sister Lily posted about the hometown date via Instagram Stores.

"They made me look so mean," she wrote. "I swear y'all our conversation went wayyyy better than this!"

In the episode, Lily didn't say much during the family's group conversations, but her one-on-one convo with Hannah was awkward at best. Hannah began, "I know music is really important to Jed and I love that. I love people who are very passionate about things." No response from Lily, at least not that we saw.

Nevertheless, Hannah continued, "Initially, just seeing that from Jed really drew me to him." Still, no acknowledgment. Then, Hannah stumbled on her words when she said, "Does it worry you in a way that his career hasn't completely took off yet, but maybe being with me at this point... Does that worry you at all? Like, he couldn't completely focus on his music."

"Yeah," Lily replied. After that, she really went in. She warned Hannah, "I'm very protective over Jed." Then she said, "And making music makes him so happy. Him potentially falling in love with you, I'm, like, not sure that it's a good thing."

Wow, that's harsh — or at least it seemed that way.

Former Bachelor Nick Viall even joked on Twitter that Jed's family probably would've preferred if he signed up for a reality TV show about singing or songwriting instead of dating. This is especially true after his rumored girlfriend Haley's claims they had plans to get back together after filming The Bachelorette and that his sole intention on the show was for music.

While he hasn't specifically commented on those claims, Jed did ask fans to be patient in a July 8 Instagram post. He promised that he will comment when he can, which he cannot do until he is eliminated from the show... if he gets eliminated.

Since fans of The Bachelorette are very invested in the show, it makes sense they have opinions on Jed and his supposed behavior. However, Jed claims that viewers have crossed the line with his family. In that same Instagram post, he said,

"It goes beyond what is said online. Threatening letters and phone calls have been sent to our homes. My parents and sister are being verbally attacked in public."

That is awful and undeserved. It should also be noted that Jed posted this before the episode even aired. Nevertheless, let's hope people take his message to heart. His family has nothing to do with his rumored indiscretions, so everybody should leave them out of all the drama.