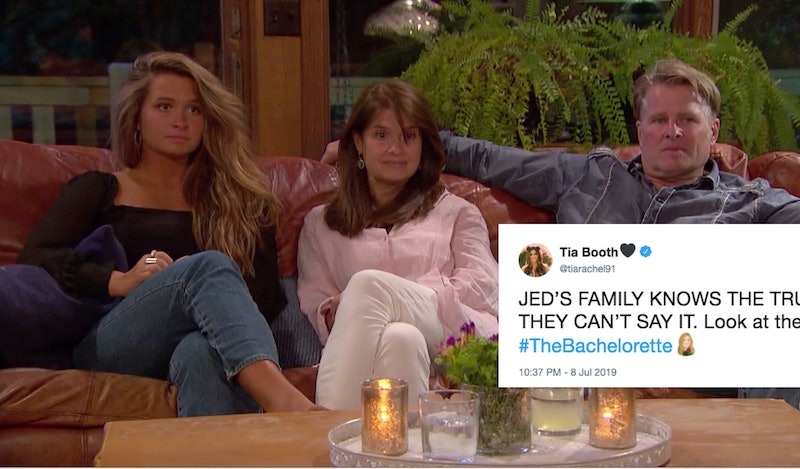 Ending the latest Bachelorette episode with Luke and Jed's hometown dates back to back was pretty rough. It's hard to watch Jed and not look for holes in his stories or pick apart everything he says, given the recent accusations that he went on the show while having a girlfriend at home. It was even stranger when Jed's family seemed so uncomfortable during his hometown visit. Bachelorette fans couldn't stop tweeting about the awkwardness of whole situation.

Sure, it probably takes a while for anyone to get comfortable with a whole camera crew in their house. And yes, most family members would be cautious about a son or brother on the verge of getting engaged to a woman he just met. However, there are two big elephants in the room: Jed's music career and his (rumored) girlfriend.

Jed has been very open about his desire to go on The Bachelorette to promote his music. He hasn't been very open about his supposed girlfriend back at home, or at least that's what she says. His ex-girlfriend Haley Stevens claimed they were dating when he went on the show. She also claimed Jed only went on to promote his music and promised they'd continue dating after. (Bustle previously reached out to Jed for comment on the claims, but did not receive an immediate response.)

At this point, he has not publicly addressed Haley's accusations, but in a recent Instagram post, Jed did ask viewers to be patient until he could. Watching the show, though, it almost seemed like Jed's own family was hinting at the situation. They had a lot of support for his music career, but very little for him finding love with Hannah.

Fans tweeted a lot about his hometown date and the hints his family may have been dropping about Jed's perceived shadiness.

1. Did Jed's Family Know About The Supposed GF?

Bachelor alum Tia Booth theorized that the family wanted to say something, but they could not.

2. They Wished Jed Was On A Singing Reality Show

Former Bachelor Nick Viall nailed it with this tweet. They probably would have been way more enthusiastic if Jed were on a singing show.

3. Did Jed's Mom Low-Key Push Jed To Be Honest?

Was she encouraging him to come clean with that toast?

Jed's family was not in board with the love Hannah and Jed kept talking about. However, his mom was really pushing for everyone to be truthful.

5. No One Seemed On Board With Jed And Hannah's Relationship

Did they just cut out all of the footage when the family expressed support for this relationship?

6. Were They Expecting Haley To Come Over Instead?

Did Grandpa not get the memo? Was he expecting a different woman to walk through the door? That would have made sense...

7. Jed's Mom Was Less Than Welcoming

Hannah admitted that she was falling in love with Jed, but his mother was not happy about it. Instead she questioned Hannah about the other guys on the show.

The Wyatts were not here for this at all.

9. Were They Warning Hannah?

10. They Probably Had A Lot (Of Girlfriends) To Keep Track Of

It seemed like their facial expressions depicted disapproval, but maybe they were just confused because there were too many women to keep track of.

11. Were They Pretending To Be In The Dark?

Did they know or not?!

That was a brutal hometown date to watch. Hopefully there were at least some positive moments that just didn't make it into the episode. Viewers feel bad watching Hannah fall for Jed, and even his parents and sister don't seem into it. The whole situation is just so uncomfortable to witness, especially given the rumors.

More like this
‘The Bachelorette’s Michelle Young & Nayte Olukoya Explained Their Breakup
By Stephanie Topacio Long
RHOA’s Kenya Moore Said Her Friendship With Marlo Hampton Is “Too Far Gone”
By Brad Witter
Taylor Armstrong Would “Definitely” Return To RHOBH After Her Season 3 Exit
By Brad Witter
Which RHODubai Housewife Has The Biggest Net Worth?
By Hugh McIntyre
Get Even More From Bustle — Sign Up For The Newsletter