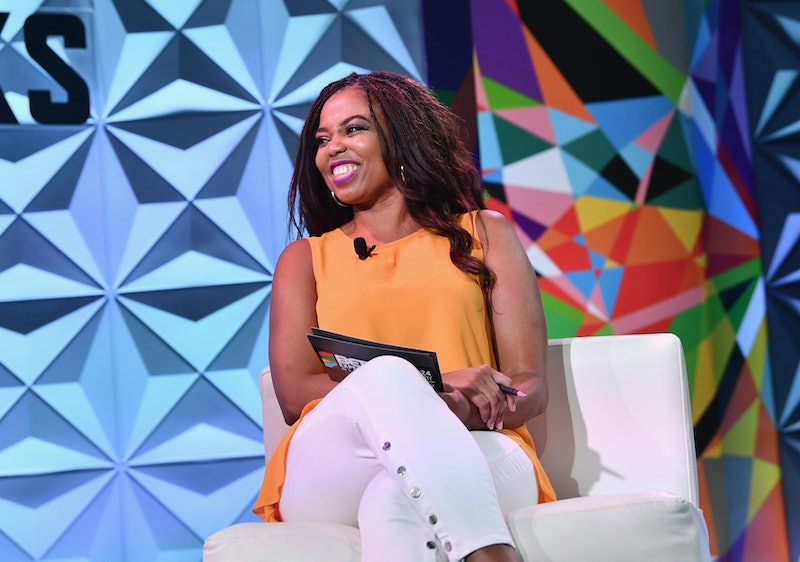 Even if you're not a big sports fan, you might have heard of ESPN anchor Jemele Hill for her outspoken takes on politics and race, especially since President Trump took office. Now, reports have emerged that Jemele Hill is leaving ESPN, but so far no details regarding the end of her employment at the network have been released. Bustle has reached out to Hill's representative for comment. A spokesperson for ESPN, when reached for comment, said that the network had no comment.

Reporter James Miller first announced Hill's rumored departure from ESPN on Twitter, calling it an "an amicable departure/buyout" and saying that it was "a long time coming." To those who have followed Hill's ups and downs at the network over the last year or so, it won't come as a huge surprise that she's leaving.

In September 2017, Hill leapt into the spotlight when she called President Donald Trump a "white supremacist" in a series of tweets.

"The height of white privilege is being able to ignore his white supremacy, because it's of no threat to you," she wrote. "Well, it's a threat to me. ... Trump is the most ignorant, offensive president of my lifetime. His rise is a direct result of white supremacy. Period. ... He has surrounded himself with white supremacists — no they are not "alt right" — and you want me to believe he isn't a white supremacist?"

ESPN responded to Hill's outburst by distancing itself from her, saying that her words "do not represent the position of ESPN" and that it had "addressed this with Jemele and she recognizes her actions were inappropriate." Hill then apologized for having connected the network to her statements on Twitter, saying:

My comments on Twitter expressed my personal beliefs. My regret is that my comments and the public way I made them painted ESPN in an unfair light. My respect for the company and my colleagues remains unconditional.

"Jemele has a right to her personal opinions, but not to publicly share them on a platform that implies that she was in any way speaking on behalf of ESPN," read the press release, as reported by the Daily Beast. "She has acknowledged that her tweets crossed that line and has apologized for doing so. We accept her apology."

Hill was then suspended from appearing on ESPN in October 2017, when she violated their guidelines regarding social media usage. While neither Hill nor the network immediately made it clear what exactly her violation was, the suspension came soon after Hill had tweeted what appeared to be support for NFL players taking a knee during the national anthem. After the owner of the Dallas Cowboys said that players who chose to kneel would be benched, Hill said it created a problematic situation for many of the players, specifically the black players.

"If they don't kneel, some will see them as sellouts," Hill wrote.

Since the fall of 2017, though, Hill has stayed with ESPN, working as a correspondent and columnist on The Undefeated, where she's been covering sports mostly as it intersects with race and culture. If the report of her departure turns out to be true, then her job title will be changing shortly.