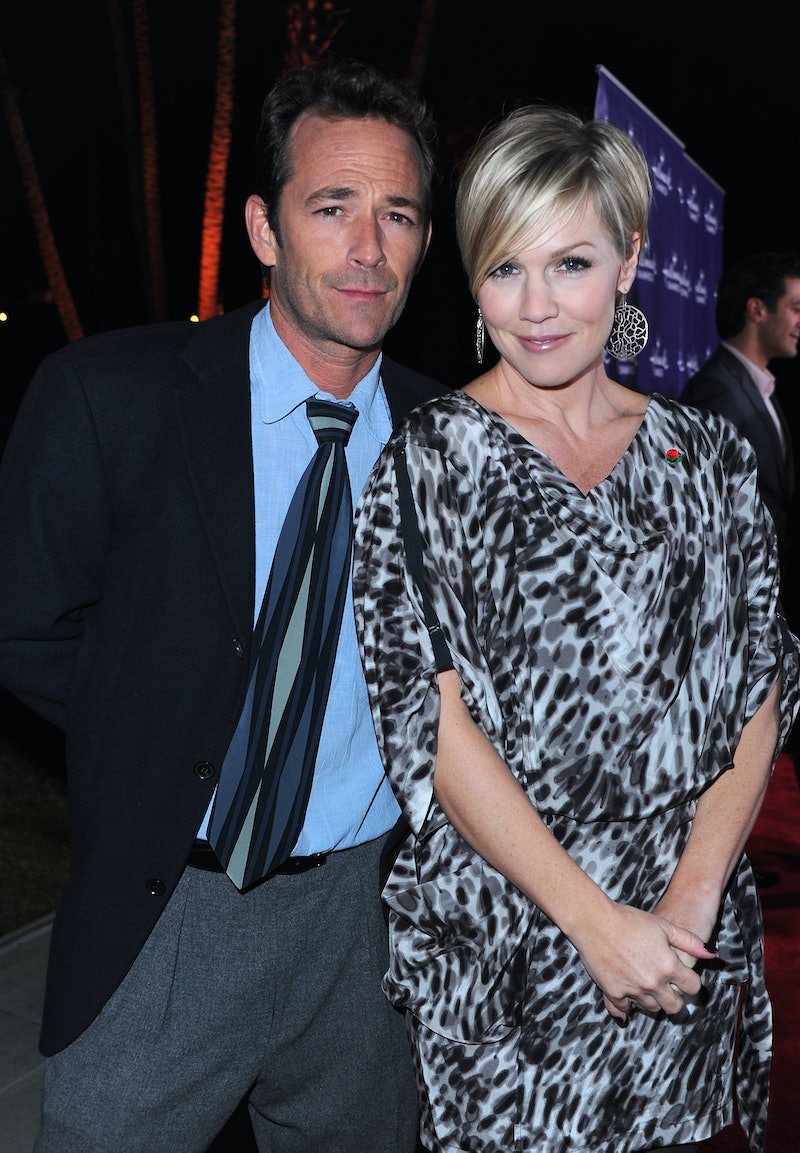 The entertainment industry became a little darker this week when it was confirmed that one of its shining stars, Luke Perry, died at age 52 after suffering a massive stroke last week. The actor was beloved by many and his passing has been met with shock and sadness by his fans and colleagues alike. But one person in particular had a very heartfelt message for her dearly departed friend and former Beverly Hills, 90210 co-star. Jennie Garth's reaction to Perry's death proves just how close the two of them were and the lasting impact he had on her life. Needless to say, it will definitely make 90210 fans burst into tears and make you realize that the Riverdale star was as kind and genuine as he appeared to be.

Garth, who played Kelly Taylor on 90210 opposite Perry, released an exclusive statement to People, which reads as follows: "My heart is broken. He meant so much to so many. Such a very special person. I share my deep sadness with his family and all who loved him. Such a terrible loss."

Truer words could not be spoken about the late actor, who died long before his time on earth should've been over. Similar sentiments of sorrow can be found all throughout social media as fans and celebrities struggle to deal with this awful news.

In fact, Ian Ziering, best known for his 90210 role as Steve Sanders, was the first to comment on Perry's passing, taking to Twitter to share his thoughts of his longtime friend. "Dearest Luke, I will forever bask in the loving memories we’ve shared over the last thirty years," Ziering wrote. "May your journey forward be enriched by the magnificent souls who have passed before you, just like you have done here, for those you leave behind.”

Meanwhile, Gabrielle Carteris, who played Andrea Zuckerman on the show, also paid tribute to Perry with an exclusive statement to People:

“I am absolutely heartbroken. Luke was a tremendous force in the lives of so many. He was a very sensitive soul who was kind, generous and he fought for the underdog. He was a strong voice and an advocate who will be so missed by all who knew him. He has left his mark – never to be forgotten. My heart goes out to his family, friends and fans around the globe.”

Perry has also received just as many tributes from his Riverdale family as well, where he played Archie's father, Fred Andrews, since the beginning of the series. Molly Ringwald, who portrayed Perry's on-screen ex-wife on the show, paid homage to him on Twitter, writing: "My heart is broken. I will miss you so much Luke Perry," she wrote. "Sending all my love to your family."

Robin Givens, who plays Sierra McCoy on the CW series, told People in an interview that she was devastated to hear of his passing. "I am crushed and so sad to hear about his passing," she said, adding:

"He was the kindest and gentlest soul the world will ever know. I will remember fondly all our late night conversations and dinners. He cared so much about so many people and was beloved by all who knew him. He was a true friend. Such a big loss."

These are just a few examples of how big of an impact Perry had on the world. Hopefully his family and friends can take comfort in knowing that while he may be gone, he clearly won't be forgotten.