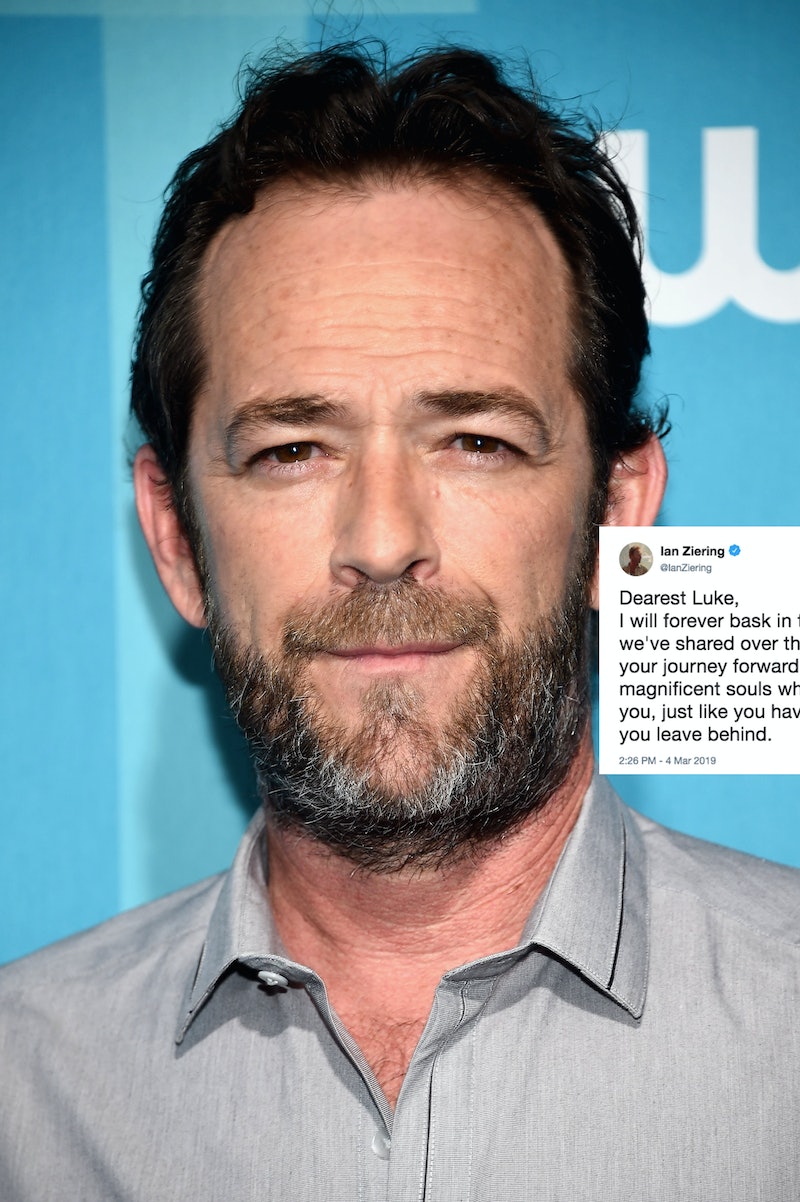 Hollywood suffered a devastating loss on Monday, March 4, as actor Luke Perry has died at age 52 after experiencing a massive stroke last week. In response to this sad news, Perry's Riverdale and Beverly Hills, 90210 costars have posted tributes to the actor, showing just how much of an impact he's had in so many lives.

TMZ broke the news on Monday of Parry's passing after first reporting on his stroke last Wednesday. His rep confirmed the news to Bustle and shared the following statement:

In addition to the love and support from many famous faces, Perry's costars from Riverdale and Beverly Hills, 90210 have taken to social media to share some fond memories they have of the actor as well as kind condolence messages.

Molly Ringwald, who portrayed Mary Andrews on Riverdale, the ex-wife of Perry's Fred Andrews, tweeted about how much she's going to miss the actor, ending her note with, "Sending all my love to your family."

Mädchen Amick posted a message on her Instagram Story in which she urged her followers to show Perry's family "respect and privacy that they deserve during this devastating time."

Christine Elise McCarthy, who portrayed Emily Valentine on 90210, was, like many, "in shock" over the news. She wrote, "He will be mourned and missed by everyone who know him and the millions who love him."

Gabrielle Carteris, who co-starred with Perry on 90210, also wrote a note to her co-star and friend, "Dearest Luke- I am so heart broken and at a loss for words. You my friend were a mighty soul and have left your mark. My love and prayers to the family and all who loved you. RIP"

Robin Givens, who stars as Sierra McCoy on Riverdale, took to Twitter to share her condolences, writing about Perry, "one of the kindest most gentle souls this world has ever known."

The creator of Riverdale, Roberto Aguirre Sacasa, also expressed a moving message about Perry, writing, "So heartbroken about Luke. He was a father, brother, friend, and mentor. Each night before he had to shoot a scene, he’d call me and we’d talk about...everything. I will miss those calls. And my heart goes out to all his family and friends."

Riverdale's Marisol Nichols shared a selfie of her and Perry along with a simple, yet heartbreaking caption, "I don’t have any words now. Maybe I will later."

The official account for the Riverdale writers room expressed their condolences on Twitter, writing, "Luke Perry... you were a joyful and vibrant soul. You will be missed but most certainly your legacy will be remembered forever. Rest in love and peace, friend."

Following this heartbreaking news, it was reported on March 4 that production on Riverdale has been shut down, according to Variety. The executive producers of the show, along with WBTV and The CW released a statement about Perry's passing, which read:

“We are deeply saddened to learn today about the passing of Luke Perry. A beloved member of the ‘Riverdale,’ Warner Bros. and CW family, Luke was everything you would hope he would be: an incredibly caring, consummate professional with a giant heart, and a true friend to all. A father figure and mentor to the show’s young cast, Luke was incredibly generous, and he infused the set with love and kindness. Our thoughts are with Luke’s family during this most difficult time.”

Based on all of these moving tributes, it sounds like Perry was truly such a kind soul, and one who had a majorly a positive impact on so many around him.