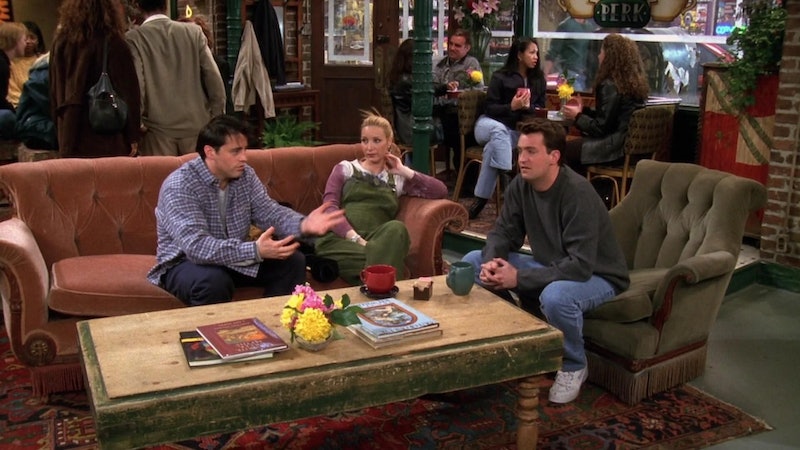 While it's not the world's most outrageous statement, it's also not what you expect to hear from one of the original leads of the show. While appearing on Arianna Huffington's new Thrive Global Podcast With iHeartRadio, Jennifer Aniston joked that Friends couldn't exist today because of one major thing: smartphones. And, to do the Horrible Bosses star justice, this isn't the only aspect that would make a revival of everyone's favorite sitcom pretty impossible to imagine.

She suggested that, after the invention of the smartphone, the pals-eternally-hanging-out vibe that made the show such a success would be difficult to re-create. "We were jokingly saying that if Friends was created today, you would have a coffee shop full of people that were just staring into iPhones..." she said. "There would be no actual episodes or conversations."

Given the show started way back in 1994 and finished in 2004 (the same year Facebook launched), many of the storylines would be radically changed if you introduced technology that's prevalent today. For example, can you really imagine that four of the six titular buddies would have chosen to date within their friendship group for years and years after the birth of internet dating? But hey, that's just for starters. I think that, if Friends was set in 2017, every character would be living a completely different reality.

Let's be real, is Rachel really cut out to be a buyer? No shade intended, but after that whole meat-in-the-trifle incident, I'm not sure I found the idea of the former daddy's girl dealing with the organizational hell that is the fashion world convincing. In a post-internet world, she would definitely have found her niche as a fashion social media influencer with a hot unboxing channel on YouTube, thousands of subscribers, and a nice line in occasional sponsored posts via her Instagram. But then how boring would it be to watch the one-time runaway bride recording YouTube videos in her bedroom and taking a zillion selfies?

She'd spend most of the second season working on her GoFundMe campaign for a musical tour to promote "Smelly Cat" and other pungent animal-related songs round Europe. Phoebe would then only appear via increasingly desperate Skype calls to beg someone to Paypal her some more money after her guitar and money got stolen when she chose the wrong house to couchsurf at.

Can you even imagine that same desire for control over her environment applied to a post-internet world? Monica would insist on staging elaborate group photos to post on Facebook at every Thanksgiving hangout, would stalk other chefs on Instagram to scope out the competition, and would spend hours freaking out over picky customers' one star Yelp reviews. Basically, she'd be the same, just with 10 times the anxiety. Yikes.

One word: Tinder. We wouldn't see much of the struggling actor, because he'd be constantly pursuing attractive strangers from the app. On the bright side, though, that would mean that whole unfortunate Joey-Rachel story arc wouldn't happen.

Would he have time to fall in love with Monica? Or would he be too busy crafting pithy one-liners for Twitter? I'd guess the latter.

I doubt that Monica's brother would be all that affected by living in 2017. The man studies dinosaurs for a living. He's clearly besotted by the past and never has time for contemporary trends. So, yeah, given how busy everyone else on the show would be, Friends would be renamed Ross and would be about the life and times of an adorkable paleontologist, which, while bearing no resemblance to its original source material, is certainly something I'd be interested in watching.

So, yeah, Aniston is right as usual. If we're being consistent about characters, Friends would be a freakin' terrible show in 2017. Thank your lucky stars for the match made in heaven that was six photogenic 20somethings living together in a television sitcom prior to the rise of social media and an internet-obsessed world.