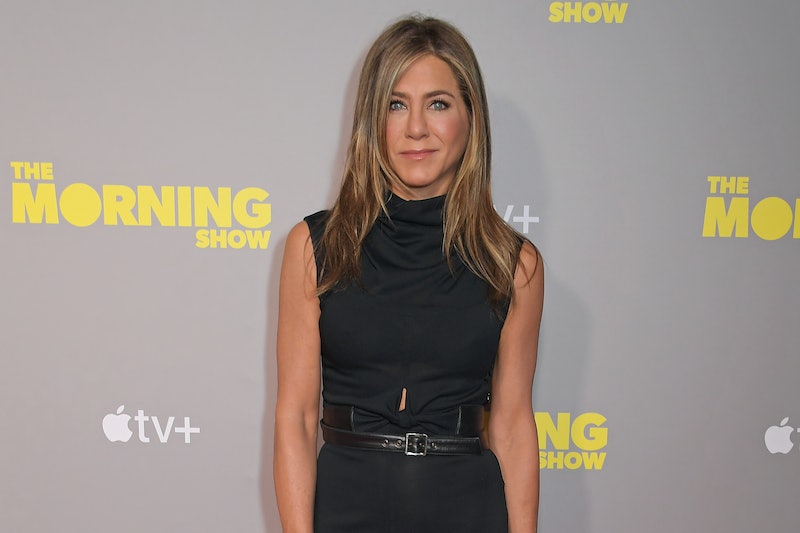 Thanks to Netflix, basically everyone has streamed Friends, and if you're one of those people, you're likely well acquainted with "The Rachel," Jennifer Aniston's famous haircut from the series. Well, say goodbye to Rachel Green's straight, piece-y look because turns out, Jennifer Aniston's natural hair texture is actually curly. Mind blown, right?

According to Glamour, Aniston's longtime hairstylist Chris McMillan posted a photo of the star from the premiere of her new Apple+ series, The Morning Show, that shows her natural hair texture. In the image, the celebrity's hair is tousled and in loose waves around her face. For his caption, McMillan explained that the look is almost completely natural. "This was such an honor to be a part of," he wrote on Instagram. "The hair is Jen's natural curl and waves. Dried natural and touched up minimally with blow drying the roots for direction and touching up random pieces with a wave iron."

Comments began pouring in from fans who praised Aniston's natural texture with some even exclaiming that the waves were a new favorite of the star's looks. If nothing else, the peek into her curls is a surprise. Aniston's hair has a signature, long-layered and sleek look. The waves, especially given that they're natural, are definitely a bit of a (welcome) shock.

The messy chic waves from the The Morning Show premiere isn't the only time she's worn the look as of late. In an appearance on The Late Show with Stephen Colbert, Aniston seemed to be wearing her natural texture as well. In a fun twist, McMillan even got a shoutout on the show as Aniston and Colbert discussed her hair from Friends for a brief moment while poking fun at the series' Lego set.

Aniston is not the only celebrity to reveal that their natural hair texture isn't what fans may have thought. Back in August, Ariana Grande's hairstylist Josh Liu posted a photo of the "Thank U, Next" singer's natural curls to his Instagram account. Obviously, Grande's signature is her ultra-long, straight ponytail, but underneath that look, her locks have some major curls.

Given the fanfare over Aniston's natural texture, can we expect the star to start rocking the look more often? Maybe, but let's be honest, no matter what style its in, Aniston's hair is always amazing.

More like this
The Best Hairstyles From The 2023 Grammys
By Olivia Rose Rushing
Blake Lively Debuts Red Hair For The 'It Ends With Us' Film Adaptation
By Olivia Rose Rushing
The Best Beauty Looks Spotted At Paris Couture Week 2023
By Audrey Noble
This Week’s New Makeup Releases & More Beauty Headlines
By Audrey Noble and Erin Stovall
Get Even More From Bustle — Sign Up For The Newsletter
From hair trends to relationship advice, our daily newsletter has everything you need to sound like a person who’s on TikTok, even if you aren’t.