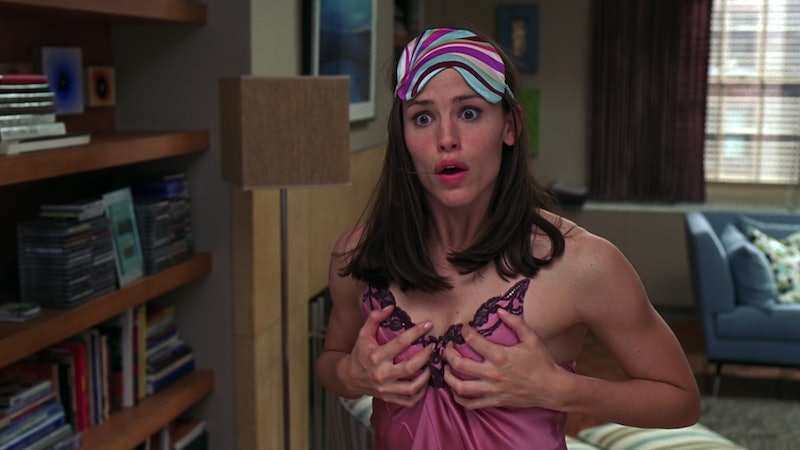 Of all of the lessons that Jenna Rink, big time magazine editor, taught viewers in 13 Going On 30 perhaps the most important one is that love is a battlefield. Clearly, that made an impact on the film's star as well, as Jennifer Garner celebrated the 15th anniversary of 13 Going On 30 with a touching Instagram post praising the cast's young actresses, and reminiscing about filming the movie's unforgettable slumber party scene.

"Fifteen years ago today #13GoingOn30 made her debut," Garner began her Instagram post, which featured clips of her character, Jenna, dancing around her bedroom with her tweenage neighbors and talking about boys. "Directed with ❤️ by our beloved Gary Winick 😇 and a clutch of loving, hardcore producers (3 brilliant women—before it was cool to be led by women!)"

Recalling the dance party scene in particular, Garner wrote about how working with her young costars gave her a new perspective on freedom, joy, and accepting yourself in your own skin. "I loved my day with this slumber party crew: they danced with abandon and reminded me of the power of just saying yes—to being in a group, to vulnerability, to wearing a bra over your clothes," Garner continued in her post.

"Imagine if every 13 year old girl had an opportunity to dance and feel beautiful like the girls in this film. I am proud of all of you," she continued. Garner's post also gave shout outs to several of the young actors in the film — she even highlighted each of the girls who appeared in the sleepover scene in her slideshow, and recalled asking a family friend to appear in the film — including some who are now very famous. "The movie benefitted from the performances of so many young actresses," Garner wrote, noting in particular the girls who played mean girl clique the Six Chicks and Christa B. Allen, who played Jenna at age 13.

"Open and twinkly-magical then— now, 15 years later, they are ruling the world. (Hi #SixChicks—@brielarson, @ashleybenson, @christabrittany—who also played a young me in Ghosts of Girlfriends Past—and my own sweet @revjuliaroth)," she continued. "I feel so, so lucky to have had the experience of making this joyful movie."

Garner wrapped up her post by acknowledging the enduring love for 13 Going on 30 that fans still have all these years later, and even thanked Ariana Grande for referencing the rom com in her "Thank You, Next" music video. "And [I feel] even luckier to be part of something that, all of these years later, can still make people (hi, @arianagrande 🤗) smile," she wrote, adding plenty of smiling emojis.

In fact, the love for the 2004 comedy remains so strong that Allen even told Bustle in a recent interview that she's still recognized for playing Jenna Rink, all these years later. "I’m 27 now, and to this day it is the thing that people bring up the most when they see me out somewhere," she said. "They go, "Oh my god, you were the girl in 13 Going on 30!" ... People love that movie, and I love it. Can we say it’s a classic? I think it’s a classic."

According to Allen and the rest of the film's young cast, Garner was just as encouraging and proud on the set as she is in her social media post. "Jennifer would come to set even though she didn't have any scenes that day," Alexandra Kyle, who played the young Tom-Tom, told Bustle. "I feel like I have a memory of her cheering us on from behind camera. There was some scene and she was just like, 'you guys did such a great job,' and [I remember] thinking, 'Wow, she's exactly what you think she's going to be in real life.'"

Clearly, 13 Going On 30 has had just as big of an impact on Garner and the film's cast as it has on everyone who watched the film growing up and dreamt of the day that they, too, would be thirty, flirty and thriving.