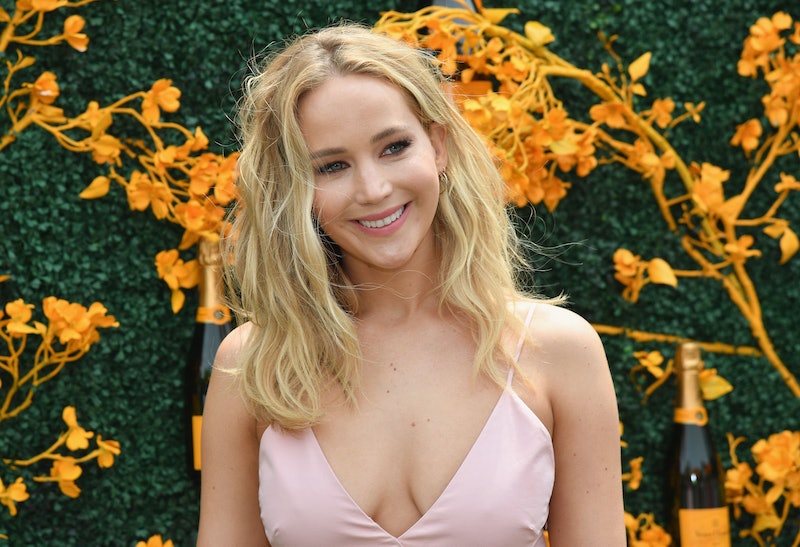 Now that she's done with Fleabag, maybe Phoebe Waller-Bridge is looking to cast an Oscar winner in her next project. On Thursday, Nov. 21, Amy Schumer shared a photo of Jennifer Lawrence and Phoebe Waller-Bridge enjoying a night out in New York City on Instagram. In the snap — which Schumer captioned with "I guess that this must be the place," in reference to Talking Heads front man David Byrne, who is also in the picture — a blurry Lawrence is relaxing with her arms around her friends, while Waller-Bridge enjoys a beer.

According to Entertainment Tonight, the photo was taken at a bar called Jimmy's Corner after Schumer treated her friends to a performance of Byrne's Broadway show, American Utopia. Schumer, Lawrence, and Waller-Bridge were joined by comedian Jerry Seinfeld and his wife, Jessica, as well as Schumer's husband, Chris Fisher. "Jimmy is 90 and has the best bar in New York!" the comedian captioned another Instagram post with the owner of the bar and Seinfeld earlier in the evening.

The night out is one of the first times that Lawrence has been spotted since her October wedding to art gallery owner Cooke Maroney. While Maroney didn't join the group for the show or drinks afterwards, Schumer's post did tease the potential of another amazing team-up by bringing Lawrence and Waller-Bridge together.

Shortly after Schumer's photo was posted, her comments were filled with fans asking for the Emmy winners and Oscar winner to team up on a project sometime soon. While there are no rumors thus far about a potential movie or TV show from Waller-Bridge, Lawrence and Schumer, it wouldn't be the first time that the Silver Linings Playbook star has inspired her friends to create something with her.

Back in 2015, Schumer revealed that she and Lawrence had written a film script inspired by their friendship, telling ET at the time that it was "funny, dirty, and real." A few weeks later, the Oscar winner revealed that the plot of the comedy centered around a pair of sisters, with Lawrence playing the wilder and less-accomplished sibling. "Amy, in this movie, she has it very together," Lawrence said. "It's her lifelong dream to be a flight attendant. She works at the airport. And I'm a mess."

“We both have very similar senses of humor, obviously," she continued, revealing that she reached out to Schumer to work together after watching Trainwreck. "[We] aren't afraid, which is a good and bad thing, because I don't know what our movie will be rated."

While Waller-Bridge and Lawrence don't have a years-long friendship to draw upon for inspiration, the pair could potentially collaborate on a project that celebrates their passion for women's rights. According to Vogue, now that Fleabag is over, the writer and star wants to write write something that takes on abortion access and the strict laws being passed in the United States. "I don’t know what it is yet," she said in early November. "Sometimes you feel it’s braver to say something outrageous, and it’s not always. Sometimes it’s braver to say the vulnerable thing."

Over the years, Lawrence has become more and more outspoken about female empowerment, writing an essay fighting for equal pay and marching at the Women's March alongside Adele and Cameron Diaz. And, just like Waller-Bridge and Schumer, she has made a career out of showing the messier, more interesting sides of women, and dismantling the ideas of traditional femininity, which means that a collaboration between the three of them would likely be the fun, feminist film fans have been waiting for.