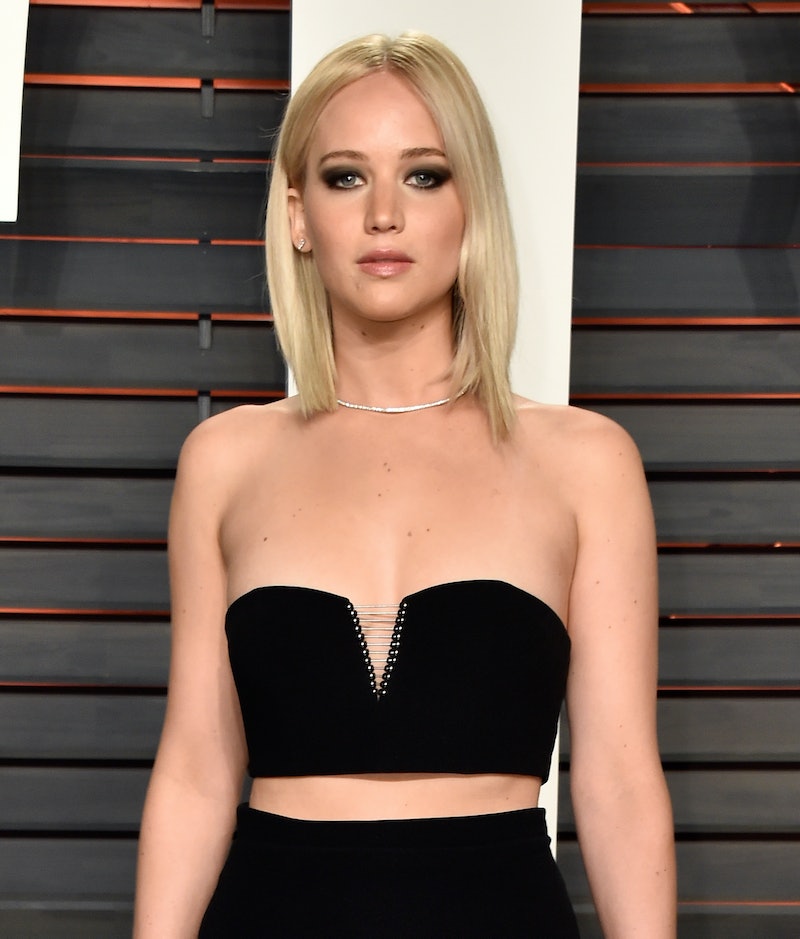 Last year, Jennifer Lawrence surprised many by writing an essay for Lenny Letter about the gender wage gap that asked, "Why am I making less than my male co-stars?" After it was revealed that Lawrence and Amy Adams were both paid much less than their male American Hustle co-stars — we're talking hundreds of thousands of dollars less — it was a question a lot of us had. The essay was a powerful statement about a topic that affects all women, but that not all women want to talk about publicly. That's why six months later it's worth figuring out if anything has really changed since Lawrence's essay took the Internet by storm.

We all hear that same statistic of how, nationally, women make 79 cents for every dollar a man makes, and it's hard to ignore. But, it doesn't tell the whole story. Lawrence's personal essay talked about the anger she felt, not toward Sony but toward herself for not pushing harder to negotiate. Afraid she'd come off "unlikeable" or "difficult," she took what she was given, and that's something she regrets: "I don’t think I’ve ever worked for a man in charge who spent time contemplating what angle he should use to have his voice heard. It’s just heard."

Lawrence took her own advice here, negotiating for a higher salary on her next film, the sci-fi love story, Passengers, co-starring Chris Pratt. According to The Hollywood Reporter, Lawrence was initially promised a $20 million paycheck, but Sony was looking to re-negotiate the initial offer. Lawrence, however, stood her ground — and in the end, she nabbed that $20 million payday "against 30 percent of the profit after the movie breaks even" for her role that is “somewhat secondary.” She will also be raking in more than her male co-star, who is reportedly taking home $12 million for the film.

But, more importantly, this very public deal puts Lawrence in a select group of Hollywood stars that make $20 million or more per picture. The list, unsurprisingly, is mostly male, with eight actors who consistently earn more than $15 million, while only four women — Lawrence, Sandra Bullock, Angelina Jolie and Melissa McCarthy — can say the same.

Almost immediately after the essay went up, female celebrities showed support for Lawrence, with actresses like Emma Watson, Carey Mulligan, Jessica Alba, and Jessica Chastain, sharing supportive tweets and stories of their own. But, Lawrence's frequent co-star Bradley Cooper also addressed the Hollywood pay gap, telling Reuters that the discrepancy in the salaries between men and women in the indsutry is "really horrible... it’s almost embarrassing."

Cooper also took action to move the industry in the right direction, telling Reuters he had already begun working with his female co-stars to negotiate salaries before films go into production. "I don't know where it's changing otherwise but that's something that I could do," Cooper said, before adding, "Usually you don't talk about the financial stuff, you have people. But you know what? It's time to start doing that."

In February, Adam Moore, the national director of equal employment opportunities and diversity for the Screen Actors Guild/American Federation of Television and Radio Artists (SAG-AFTRA), told Cosmopolitan there was no available statistics on the salary gap between actors, but that there is a Hollywood wage gap that needs to be addressed.

Just check out Forbes 2015 Highest-Paid Actors and Actresses lists and you can see that pay gap for yourself. There was a $28 million discrepancy between the highest paid actress (Lawrence at $52 million) and the highest paid actor (Downey, Jr. at $80 million). Look closer at the highest paid movie lists in 2015 and you see that the 10 highest-paid actors made a combined $431 million, while the 10 highest-paid actresses made only $218 million. "The most visible workplace on the planet is where our members go to work," Moore told Cosmo. "It's not just about these A-list celebrities that didn't feel they got as many millions of dollars as they want. This goes to a larger issue of equity for everyone in this country."

Lawrence's tale of unequal pay was used to help pass California's Fair Pay Act, which was signed by the state's governor in October 2015 — days before Lawrence's essay — and went into effect in January 2016. According to the Los Angeles Times, when talking to reporters about the bill, actress Patricia Arquette — who used her Oscar win speech in 2015 to stump for fair pay — explained that the "Lawrence example shows that the power brokers in the entertainment industry, from agents to executives, need to address gender inequality."

The California law promises to expand federal legislation that prohibits employers from paying women less than men for not just the same work, but similar work. The law has been called groundbreaking because it puts the burden of proof on employers, who will have to "justify the differences in compensation between male and female workers."

While the law can't be completely tied to Lawrence's essay, the fact that it was in the news in the same week as the bill kept the topic fresh in everyone's mind. For Geena Davis — who heads up her own Institute on Gender in Media — Lawrence's essay broke the code of silence for women who thought they couldn't speak publicly about their salaries. That they couldn't complain about making less while doing the same amount of work. That they didn't have a voice in the matter.

Davis told Time, Lawrence's essay was so important because it put public pressure on everyone to do something about this issue. "When Jennifer Lawrence recently penned an essay critiquing the wage gap, people listened," Davis said. "So now could be the beginning of a good time for women in Hollywood. But we’re not there yet."

While the discussion over fair pay in Hollywood isn't going away anytime soon, it also still needs to expand. Heads of studio need to get involved and side with their female stars who are making them money — often, as much, if not more, than their male stars. Alan Horn, chairman of Walt Disney Studios, told Variety that studios have a responsibility to their female stars.

"Audiences have proven that there’s an appetite and a market for dynamic female leads and female-driven stories," Horn said. "And as an industry, we have a responsibility to create those roles for women and compensate them accordingly."

No one thought that Lawrence's essay would change things completely, but in six months, it's had a positive effect on the discussion. Actresses have spoken out to say that they have choices when it comes to their salaries. That they can negotiate or turn down a role if it doesn't meet their demands. Sure, this was always an option, but after Lawrence spoke out, it became something we could talk about. That's progress, which to some may still seem too slow in moving forward, but it is moving forward.