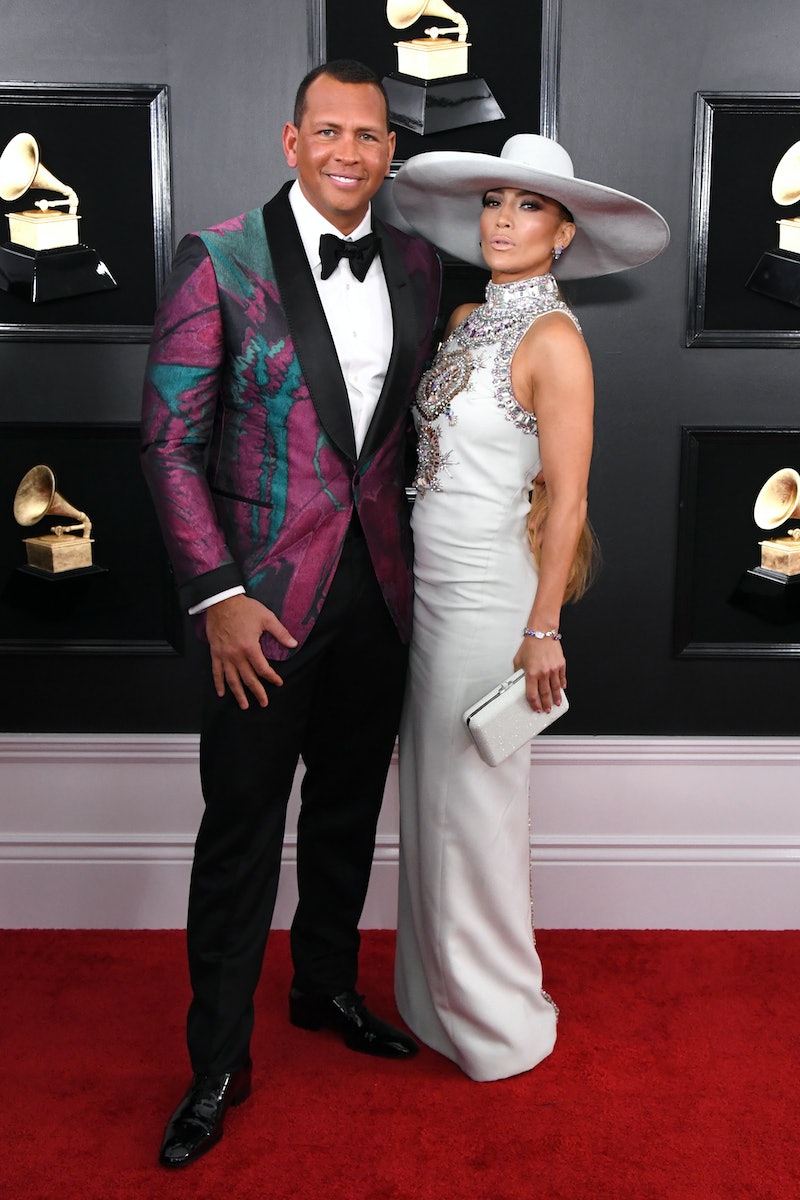 These two celebrity couples make up one unexpected dream team. Jennifer Lopez and Alex Rodriguez visited Chip and Joanna Gaines for the weekend, and it's clear these stars are all big fans of each other. Rodriguez and Lopez made a trip to Waco, Texas, where the Gaines' family lives in an idyllic farmhouse with 40 acres of land, according to People. Chip and Joanna seemed excited to welcome the stars to their rural home, and all four posed for a photo in the sunshine on a grassy lawn.

On Saturday, April 27, Chip shared the group photo on Instagram, including a funny message about the visit. He wrote, "What is going on!?? This is like a Twilight zone of hot people. Then there's me, looking as usual.. disheveled. Thanks for coming to town @jlo and @arod!" Rodriguez also posted the photo with the Gaines' on Instagram, showing that he was just as excited about the chance to meet the HGTV stars. He wrote, "ARod Corp hits Capital Gaines in Waco, Texas. #CapitalGaines. @joannagaines @chipgaines." The trip appeared to be a belated anniversary gift for Lopez, who wrote in the comments, "Best anniversary gift ever!!" with several hearts.

In fact, the trip to the Gaines' farmhouse was the second phase of Rodriguez's Fixer Upper-related anniversary gifts for his fiancé. In February, Lopez revealed Rodriguez surprised her with a FaceTime call with Joanna during an appearance on Ellen, according to People. The "Dinero" singer told the host that she was a super fan of the show, and the phone call was the perfect present. "He opens up FaceTime and it's Joanna Gaines. And I was like, 'Are you kidding?! Hi!' I totally fangirled out," she said. "And she was like, 'Hi,' just like she is on the show."

Rodriquez and Lopez even solicited the couple's advice for renovating their new home. Chip and Joanna don't take on projects outside of Waco, Texas, but Joanna did offer to look at some of the newly-engaged couple's designs, even though the house flippers don't typically offer those services. "I was like, 'Yes just help me! A little bit! Like, you don't even have to come out here, you have the baby, how's the baby?" Lopez said. "It was amazing." In June of 2018, Chip and Joanna Gaines welcomed a fifth child, a baby boy named Crew.

According to People, Joanna visited Lopez's Malibu home in March, and is reconsidering doing work on the house. However, Chip and Joanna would have to fit helping the couple with their home into a pretty busy schedule. In addition to welcoming the newest member of the family, the couple continues to buy property in Waco, Texas to renovate, including an 1890s castle, as per Today. Additionally, in the summer of 2020, Chip and Joanna Gaines will launch a new TV network to replace Discovery Inc.'s DIY channel, according to Jezebel.

It's not yet clear if the Fixer Upper stars might have a project in the works with Lopez and Rodriguez, whether it's a renovation on their new home or an appearance on the couple's new lifestyle network. Even so, it's clear the weekend was a chance for all four stars to hang out and talk home design. And hey, if the two couples just happened to get to talking and start a show together, fans will definitely be tuning in.