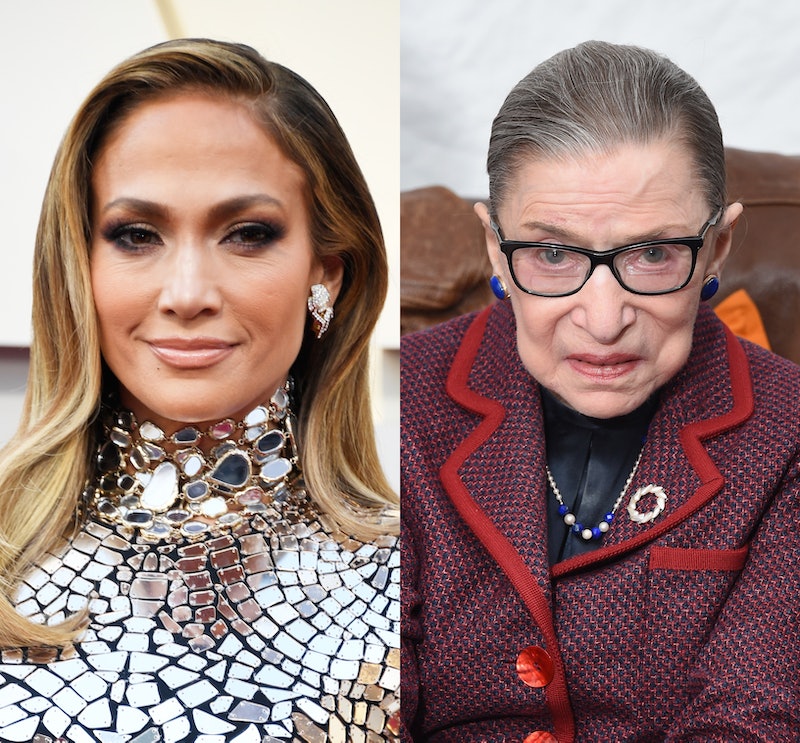 You might not immediately think of a supreme court justice when you consider who to ask for marriage advice, but Jennifer Lopez asked Ruth Bader Ginsburg for some, according to The Hill, and her response was hilarious. According to the report, Ginsburg retold the story of her conversation with Lopez while speaking at the Library of Congress National Book Festival on August 31, and revealed that she gave the singer the same advice that was given to her by her mother-in-law years ago: "It helps, sometimes, to be a little deaf."

Ginsburg reportedly told the crowd that Lopez called her "about a month or so ago" and asked her for the secret to a happy marriage. Ginsburg was married to husband Marty Ginsburg for more than 50 years until he died in 2010. She stayed incredibly busy with her career throughout the entire time, and people marveled at the persistence and success of their relationship, especially because in that time, it was far less common for a woman to be the more successful and busy person in the relationship.

Now, times are different, and both Lopez and Alex Rodriguez, whom she became engaged to in March, are very successful and busy with their careers. But still, the Hustlers star knew that Ginsburg's advice would remain relevant and powerful.

"She said she would like to meet me and introduce her fiancé Alex Rodriguez," Ginsburg told the crowd at the Walter E. Washington Convention Center. She said they had a "very nice visit," and Lopez "wanted to ask if I had any secret about a happy marriage." She went on: "Now, A-Rod is traveling with her to concerts with her all over the world." The Supreme Court Justice then went into detail about how her mother-in-law gave her that one bit of advice.

"On the day I was married, my mother-in-law — I was married at her home — she took me aside and said she wanted to tell me what was the secret of a happy marriage," Ginsburg recalled. "And I said, 'I'd be glad to hear it. What is it?'" And that's where the deaf comment came in. She said she's used the same advice "in every work place, including the good job I now have," so it must be effective.

Lopez shared about her meeting with Ginsburg on Instagram, and said they planned on taking the advice. "It was an honor to meet RBG... I so look up to her as a person, a woman, and a human being; but also as a wife, a working woman, and a passionate advocate for equality for women and minorities, the underprivileged of this country," she wrote. "I was in awe of her, watching how powerful and sharp she is, how clear and full of wisdom... I loved her advice for a happy marriage."

When she and Rodriguez tie the knot on a date that has yet to be announced, it will be Lopez's third marriage and Rodriguez's second. On August 26, she told Variety that with Rodriguez, she feels her life finally has balance. "He loves being at every show that he can be at," she said. "I go to all his baseball games. There were times in my life when my career was going great, and my personal life was going OK. And there were times my personal life was stable, but my career was not great. This is the first time where I have a really beautiful alignment between the two. I think Alex brought that for me. I love it. We have a beautiful life." And with a little help from Ginsburg, she's sure to have a beautiful marriage too.

More like this
Beyoncé & Madonna’s “Break My Soul” Remix Honors A Group Of Black Icons
By Stephanie Topacio Long
Who Is Camila Cabello Dating? She's Getting Cozy With Lox Club CEO Austin Kevitch
By Radhika Menon
Kim Kardashian & Pete Davidson’s Relationship Timeline From Start To Finish
By Jordyn Tilchen and Bustle Editors
'A League Of Their Own' Star Abbi Jacobson Is Engaged To Jodi Balfour
By Jake Viswanath
Get Even More From Bustle — Sign Up For The Newsletter