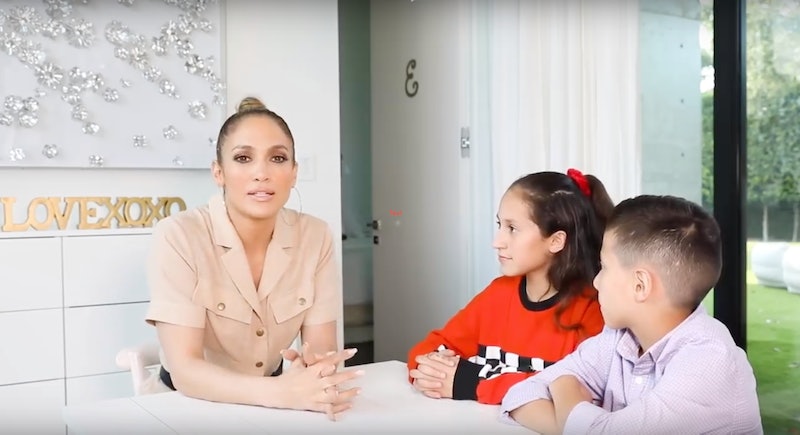 Jennifer Lopez is a triple threat, with success in dancing, singing, acting — she stars in the movie Hustlers, in theaters on Sept. 13. And the apple doesn't fall far from the tree when it comes to her kids, twins Max and Emme, who she shares with ex-husband Marc Anthony. Jennifer Lopez's kids love to perform just like their famous parents do. And let's be honest, no one is surprised by this. They are being raised by global superstars, of course, they're comfortable on stage.

In fact, the two of them almost stole the show from their mom at JLo's fiftieth birthday party in Miami on July 24, even with some superstars in attendance. According to an article from E! News, Lopez celebrated her birthday at a private home owned by Gloria Estefan. There were performances from Ashanti, DJ Khaled, Lopez, and others including the Anthony twins. JLo's daughter Emme belted out the song "Do You Know Where You're Going To?" by Diana Ross. Her son Max did his own rendition of the song "My Shot" from the Broadway musical Hamilton.

Emme also did another musical performance at the party with Alex Rodriguez's two daughters Ella and Natasha. The trio sang the classic song "It's a Hard-Knock Life" from the movie Annie.

This isn't the first time that the twins performed for their superstar mom. On March 15, the singer shared on Instagram a throwback video of the twins performing her song "Feel the Light" from the Home movie soundtrack. Emme sang the lyrics into a microphone while Max danced around in the back. What a dynamic duo.

Aside from singing and dancing, Emme and Max also have some interview skills. They conducted an indepth video for JLo's YouTube channel called "Twin Talk: AMA Emme and Max." The two of them came up with their own questions during the nine-minute interview segment and they absolutely crushed it.

They asked her questions about her childhood, mathematics, motherhood, her love life, and, of course, they tried to get her to name a favorite child. Obviously, she did not answer that one.

During the interview, the twins asked their mother to name her favorite things about them. She declared, "I love to hear both of you guys sing." Max divulged, "The only way you'll hear her sing is in the shower." This prompted Emme to admit, "I sing my heart out in the shower." Max advised his mom, "If she's in the shower, walk by her room and you'll hear it." That is probably still true, but the shower walk by isn't the only way for JLo to hear her daughter's voice.

Emme was actually a major part of Lopez's It's My Party concert tour. The mother/daughter duo sang JLo's song "Limitless" at multiple tour dates. The duet partners even wore coordinating red ensembles for their performance.

Before the tour, Lopez told Entertainment Tonight, "I think [Emme has] come out of her shell in the past couple years." She discussed the possibility of her daughter joining her on stage, remarking, "If she wants to and she feels comfortable. It's a big arena." Well, she felt comfortable and she killed it.

Max and Emme can sing, dance, interview, and just based on their genealogy, they are probably masters at so much more. It wouldn't be at all surprising if they followed in their parents footsteps with entertainment careers of their own.