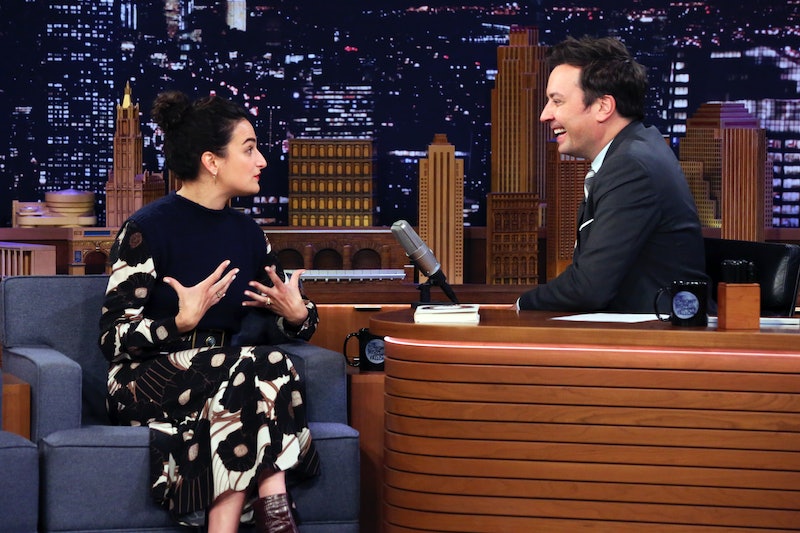 People are fascinated by engagement stories: The magical moment when two people commit to spending the rest of their lives together. Everyone always wants to know every detail about "how it happened" so they can "ooh" and "aww" in admiration, but a certain celebrity's engagement story evokes more of an "mmm" reaction. Jenny Slate's proposal involved sausages — a lot of sausages actually, as the actor recently revealed on The Tonight Show Starring Jimmy Fallon. And while that particular detail might not conjure up a typically magical moment for some, the whole thing was oh-so-perfectly Slate.

Slate announced her engagement to boyfriend Ben Shattuck via an Instagram post in September. "He took me to France and made a picnic and made me feel happy and free and then he asked me to marry him and i screamed YES," she captioned a series of photos from their trip. It's a nice story, sure, but it wasn't the *full* story.

On Tuesday, Slate shared the full story when appearing on Fallon to promote two new projects: her Netflix comedy special Stage Fright and her collection of essays Little Weirds — the latter of which is exactly how you'd describe her proposal story: It's a little weird. "We were in France, and as it happens when you're in France, we came upon an abandoned castle," she recalled. After entering the castle, the couple found a spot to sit down and have a picnic — a picnic that Slate had done most of the grocery shopping for. "It was just like, all salami," she told the host. "I love a sausage."

She then continued, "The sun is setting, he's holding my hand, he's saying, you know, these beautiful things to me." At that point, Slate said she felt the proposal coming, which caused her to ... suddenly get really hungry? "He's like, 'Will you be my wife?'" she recalled. "And of course, at that moment when I could've been like, 'Yes' or whatever, I have somehow nervously stuffed all of the sausage into my mouth and I'm like, 'Bleh!'"

"Just sausage dangling," she continued, explaining that since the sausages were connected by a string, one was hanging out of her mouth. "I'm like, 'I will be your wife! Now you said it, you have to do it!'"

Slate was first rumored to be dating Shattuck, who is a writer and artist, back in January when a source for Us Weekly spotted them looking "very cozy" at the 2019 Sundance Film Festival. "They seemed cute together," the insider added. Prior to Shattuck, Slate dated Chris Evans on and off for about two years, but the couple split for good in March 2018.

Slate has yet to reveal how her wedding planning is coming along, or whether they've even had time to set a date yet. It'll be a majorly missed opportunity, though, if there isn't at least one buffet table dedicated solely to salami.