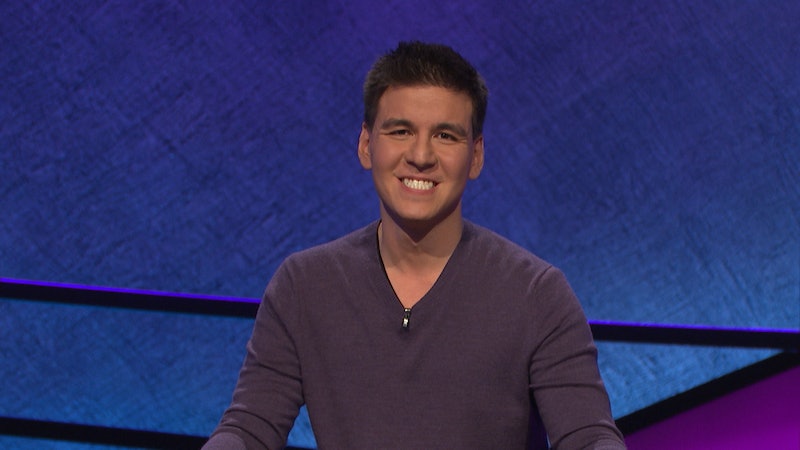 Who is the best Jeopardy! contestant? Well, that might be the guy who just gave a portion of his winnings to a cause close to Alex Trebek's heart. James Holzhauer donated portion of Jeopardy! winnings in Trebek's name to pancreatic cancer research, according to People. Back in March, Trebek revealed he was diagnosed with stage 4 pancreatic cancer. But after recently letting fans know his cancer is "near remission," this news of Holzhauer's generous donation is just another reason to celebrate.

Holzhauer became a Jeopardy! favorite after winning a total of $2,462,216 over the course of 32 straight games with his crafty betting style. He's only the second person in Jeopardy! history to accumulate more than $2 million, according to Variety. Now the professional sports bettor is giving back some of the money he won to a charity that is looking to cure pancreatic cancer.

People reported that Holzhauer gave the 2019 Naperville Pancreatic Cancer Research Walk in Naperville, Illinois, where he once lived, a donation of $1,109.14. “For Alex Trebek and all the other survivors," he wrote along with his donation.

Fans might have noticed that Holzhauer's very exact donation is a meaningful one for the Jeopardy! winner, whose loss earlier this month was deemed a spoiler by fans. The number is the birthday of his 4-year-old daughter Natasha, who also has a special connection to Trebek. On Holzhauer's final Jeopardy! episode, he gave Trebek a get well card from his young daughter.

“I want to express my thanks to your beautiful little daughter, Natasha, for having made this get well card for me,” Trebek told Holzhauer to start off the episode. “That was very sweet of her.”

Holzhauer learned of the July 14 walk from a fundraiser and Jeopardy! fan Ann Zediker, who reached out after watching that same episode. While Holzhauer couldn't take part in the walk, he was happy to donate.

In an interview with CNN, Zediker, who lost her father to pancreatic cancer in 2010, said that when she emailed Holzhauer about the event "there was no expectation on my end. I was just thrilled that he responded. I knew that Alex’s story had an impact on him, just like it has an impact on anyone who’s working with a family member who’s going through pancreatic cancer.”

After revealing his diagnosis earlier this year, the 78-year-old Trebek, who has hosted Jeopardy! for the last 35 years, has fought this disease, which has a nine percent survival rate, in the spotlight. He hasn't taken time off from the show, despite some days being tougher than others.

In a recent People cover story, Trebek let fans know the chemotherapy is working. “It’s kind of mind-boggling,” Trebek said. “The doctors said they hadn’t seen this kind of positive result in their memory … some of the tumors have already shrunk by more than 50 percent.”

Trebek also talked to People about the power of well-wishers and how they've kept his spirits up throughout this ordeal. “I’ve got a couple million people out there who have expressed their good thoughts, their positive energy directed towards me and their prayers,” he told the magazine. “I told the doctors, this has to be more than just the chemo, and they agreed it could very well be an important part of this.”

Another important part is research and Holzhauer's recent donation is a step to helping Trebek and so many others beat cancer.