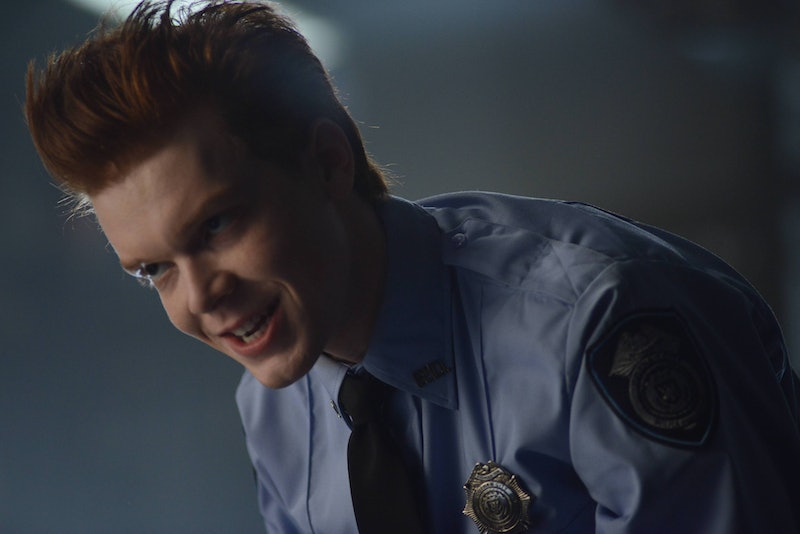 For the past few months, Gotham has been teasing Jerome's return, but it turns out, the show's memorable villain (and possibly its future Joker), hasn't come back to life just yet. Yes, there were a few reused clips from earlier seasons and Cameron Monaghan played a corpse yet again, but the midseason premiere was not the episode in which Jerome came back to life. It's been a long time since there was actually new material for Jerome, but Gotham City still seems as fixated on the guy as the Gotham audience is. Between Lori Petty's guest spot as a clownish club owner and now, the underworld's Jerome obsession has only gotten more intense.

Jim and Harvey, working together again, are able to uncover the plan that should eventually bring Jerome back so he can get his upcoming arc started. It turns out, Indian Hill workers have started experimenting on Gotham's morgue patients — finally, connecting the dots from Season 2, when Jerome was on a slab in that very same morgue, to now. Unlike previous characters who we saw rise from the dead, the former Maniac wasn't brought back by Hugo Strange, nor is this going to be a Kristen Kringle/Isabella dopplegänger situation.

Instead, Jim and Harvey's suspect, Dwight Pollard, has been experimenting with using electricity to revive the dead, and while their first victim was only alive for a brief amount of time before being totally fried by the thousands of volts coursing through her nerve endings, they're currently refining their plans in order to potentially safely revive their hero. This could all turn out to be yet another Jerome-related fakeout, but right now, it seems like there might actually be a real return for Jerome Valeska in Gotham's next few episodes.

The biggest question that remains, and that Jim and Harvey are currently trying to piece together, is why? Whatever's motivating these Jerome acolytes, it can't be good — he is one of the city's cruelest villains, after all, and having him return will only bring more chaos to Gotham: Mad City.