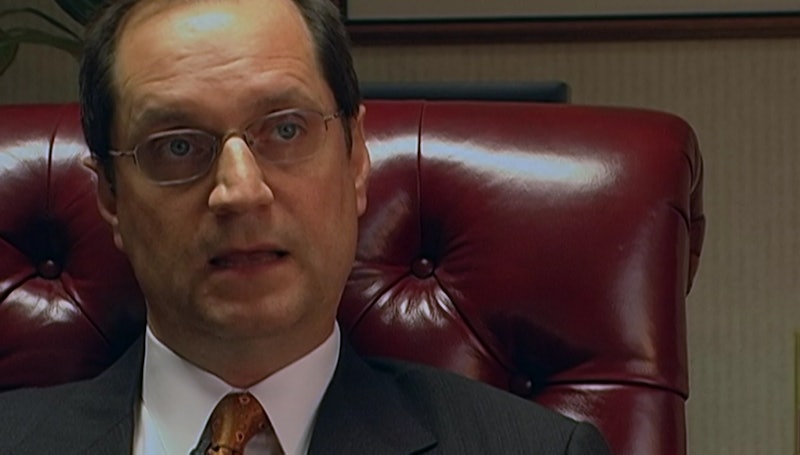 Since the release of Netflix's acclaimed docuseries Making A Murderer, Jerry Buting's life has changed significantly. He and Steven Avery's other defense lawyer, Dean Strang, have become internet memes and legal heartthrobs. Buting leveraged his popularity to write the book he had always wanted to complete. He and Strang launched a speaking tour across the United States and around the world, and along with Professor Keith A. Findley, have founded the nonprofit The Center for Integrity in Forensic Sciences. But despite all of the media attention and radical life changes, Buting's central message remains the same as it has been for years: America's criminal justice system is in need of reform.

"After Making a Murderer came out, both Dean Strang and I suddenly became these internet sensations, which we were not expecting. And it gave us an opportunity to [promote] our message that we've been trying to tell the public for years... about the problems with our criminal justice system, and where we see the problems, where we think there could be some improvements," Buting tells Bustle over the phone. "So we went on this speaking tour... because there's still a need to make people aware of what's wrong with our system."

Buting sees those problems as manifold and dangerous, but perhaps none as much as what he believes to be the coercive interrogation techniques often used by law enforcement, techniques that he says were on full display in the confession tape of Steven Avery's nephew, Brendan Dassey. Dassey was an alleged accomplice, along with his uncle Avery, in the 2005 rape and murder of Teresa Halbach (Dassey maintains his innocence, with his lawyers arguing his confession was coerced). Investigators pulled Dassey from high school to interrogate him without a lawyer or a parent present. As chronicled both in Making a Murderer and in a report from The New Yorker, interrogators reportedly used the Reid Technique to elicit a confession from Dassey. Both The New Yorker and Buting denounce the Reid Technique as coercive, and likely to result in false confessions.

"Over many hours of interviews, the investigators appear to do exactly what psychologists and legal experts warn not to do with juveniles and other suggestible people — they manipulate Dassey, scold him when he gives the 'wrong' answers, and steer him to the right ones," The New Yorker report claims. And Buting wants viewers of Making A Murderer to know that the techniques used on Dassey are more common than one might think. "The interrogation techniques that were employed on [Dassey]...people need to know that that is not unique to Brendan Dassey," Buting says. "That happens every single day all over the country to juveniles and vulnerable adults."

Like the first season of Making a Murderer, Part 2 of the docuseries, set to launch on Netflix on Oct. 19, pulls back the curtain on systems of criminal justice in the United States. No longer fighting to win at trial, Avery and Dassey are shown working through the grueling appellate process. "The average layperson thinks, well, you know. Yeah, juries can make mistakes, juries can get it wrong. But if they do it'll be fixed on appeal and that is absolutely not what happens," Buting says, growing more animated. "Our whole appellate system, one of its big flaws is more and more it has been become sort of entrenched in the idea that... making a judgment final is more important than actual justice or actual innocence. And so there's all of these, I call them procedural hurdles or obstacles, that are thrown up to prevent somebody from from getting a real fair shake on appeal."

In particular, Buting voiced frustration with how Dassey's appeals process has unfolded over the past few years. "[Dassey] has excellent lawyers now, Laura Nirider and Steve Drizin from the Northwestern Center for Wrongful Conviction of Youth, and they've been really fighting hard for him," he says. "And even with the best lawyers that he could get he still, his attempts have been foiled." In 2016, a federal judge ruled to overturn Dassey's conviction, citing the manner in which a confession was extracted from the defendant, according to CNN. Then in 2017, the 7th Circuit Court of Appeals agreed with the 2017 ruling to overturn Dassey's conviction in a 2-to-1 decision, per Rolling Stone. Though this initially seemed like a monumental victory for Dassey, The Chicago Tribune reports that the full 7th Circuit later upheld Dassey's conviction in a 4-to-3 decision.

Dassey's lawyers attempted to bring his case before the United States Supreme Court, but the Court decided not to hear his case in June of 2018, per The New York Times. "It was a great disappointment to me and to many juvenile justice advocates that the US Supreme Court chose not to hear Brendan Dassey's appeal in July because they really have not weighed in with any decision on whether the kinds of techniques that police use are permissible or not in the last 40 years," Buting says of the issue.

As for Avery's case, Buting no longer has intimate familiarity with the details of his appeals process. Strang and Buting stopped representing Avery after his conviction, but Buting insists that any rumors of a dramatic parting are completely unfounded. "Some people thought, oh, well just because... he ran out of money, we weren't being paid any more, and that had nothing to do with it," he says. He explains that because of Wisconsin law, if Avery wanted to appeal citing that his counsel had been ineffective during his initial trial, Buting and Strang could no longer represent him. Making a Murderer Part 2 will feature Avery's new counsel, wrongful convictions specialist Kathleen Zellner, and her attempts to free her client.

When asked if he thinks that he and Strang made mistakes during Avery's criminal trial, Buting concedes that it's possible. "Whenever you lose, particularly a case where you think you should win because you thought there was reasonable doubt — and that's the way I felt then and feel today about Steven Avery's case — you always second-guess yourself," Buting explains. "Could we have done something different? Should I have cross-examined this person differently? Should we have tried to get a jury from a different county or you know, all of these kinds of issues. There's a lot of decisions that are made in both of the build-up to the trial and the trial itself. And you know, we did the best we could."

Buting was also quick to dismiss claims coming from former District Attorney Ken Kratz that Making a Murderer had presented a one-sided view of Avery's case. "I mean, I think at least when it comes to the evidence, you saw like three or three and a half hours of actual courtroom footage. You saw what people said and how they said it and how they looked when they said it," Buting says. "And the main issues that were fought about and were argued for pages and pages and pages in our closing arguments were all covered. The blood, the bones, the bullet, the vehicle, all of that stuff was covered in the documentary and a lot more that never even came to the jury in the trial."

Nevertheless, the criticism was ferocious enough that the documentarians felt the need to address it in the opening minutes of Making a Murderer Part 2. The season opens with a montage of news clips regarding the release of Making A Murderer, including the claims from Kratz that the documentarians had purposefully left out evidence of Avery's DNA on the hood latch of Halbach's car in order to make him appear more innocent. But when asked about this assertion, Buting's response makes it clear he thinks the idea is ridiculous.

"You know, after the documentary came out, Kratz raised that as some example of powerful evidence that was used or that was kept out of the documentary, powerful evidence for the prosecution and that's just simply not true," Buting explains, adding that the defense had made a compelling argument that Avery's DNA was allegedly transferred to the hood latch by a state analyst who admitted that he forgot to change his rubber gloves before moving from the area of the car where he was taking samples of Avery's blood to the hood in order to check the mileage of the car. Buting refers to this as "innocent transfer of DNA."

"And when all that came out in the trial, Kratz obviously knew that it was not a strong piece of evidence because he spent very little time arguing it. So unfortunately, that's just one of many false characterizations and false facts that Mr. Kratz has tried to raise after the documentary came out," Buting says. Kratz did not respond to a request for comment.

Avery and Dassey were convicted, and both uncle and nephew remain incarcerated, yet to have lasting success in the appeals process. When asked if he still has hope for his former client and for Dassey, Buting is measured in his response. "I do. It's dimmed somewhat for Brendan, because he was kind of at the end of his appeal efforts when the Supreme Court turned it down... But I'm still hopeful, you know. I still support Steven and Brendan," he says.

And no matter the outcome for Avery and Dassey, Buting will remain a fierce advocate for serious criminal justice reforms. "I hope they can get a new trial and I'll continue to speak whenever I can to try and not only support them, but also let people know that they are not unique. That there are many many more [cases like this]," he says. "I'm still a practicing lawyer. I have my own caseload and all of that. But to the extent I have the time I still try and speak out and let people know what's really going on."