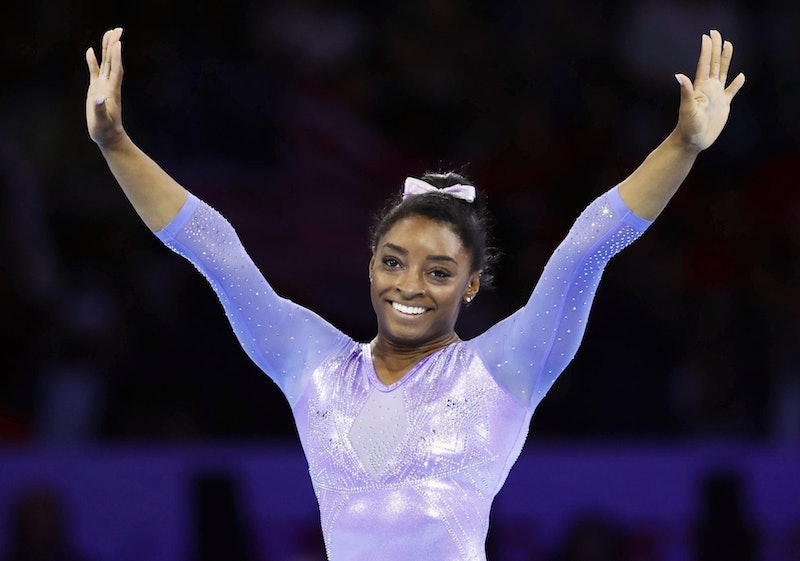 We can, we will, and we must stan this interaction: Cheer’s Jerry Harris responded to Simone Biles’ desire to join the Navarro cheer team with his signature mat talk. Biles, a five-time Olympic medalist in the USA Gymnastics team, recently joined the ranks of celebrities that have professed their love for the hit Netflix series after she tweeted on Thursday, Jan. 23, “netflix series CHEER had me convinced after 2020 I’m trying out for Navarro Cheer.” On the heels of her tweet, Harris, one of Cheer’s breakout stars, responded with enthusiasm via Entertainment Tonight.

In the clip, Harris relays a message to the decorated gymnast: “ ... I love you so much! If I was on a mat with you, I would say this: ‘Let’s go, Simone! Keep pushing! Get up on your feet! You got it! Let’s go!’” ET captioned the cheerful video, “@Simone_Biles you have spoken and Jerry is ready to mat talk you all the way to @Navarro_Cheer!”

As the most decorated US women’s Olympian in World Championship history, Biles would certainly be an ideal addition to the Navarro cheer team. Plus, Harris isn’t the only Navarro athlete ready to welcome the gymnast with welcome arms. Coach Monica Aldama replied to Biles last week and tweeted, “Welcome to the team!!!”

Netflix’s Cheer, a six-part docuseries, chronicled the ups and downs of the cheerleaders on the Texas-based Navarro College Bulldogs team as they prepared to compete at a national competition in Florida. The series pulled the curtain back on the world of competitive cheerleading and introduced viewers to breakout stars Harris, Lexi Brumback, La'Darius Marshall, Gabi Butler, and more.

Since its premiere, celebrities like Chrissy Teigen, Gabrielle Union, and Reese Witherspoon have buzzed about the series on Twitter. Witherspoon tweeted that at the end of the series, “when La’Darius’s brother started crying, and Morgan’s grandparents figured out how to stream the competition and Lexi nailed her tumbling pass, and Jerry nailed all his stunts,” she “cried big baby tears.” Teigen tweeted, “I just finished it in a day and have begun my instagram stalking of the athletes. as the cheer kids say, I went full out.”

Last week, Butler, Harris, Marshall, and Aldama appeared on Ellen to discuss the show and Harris’ signature mat talk. “Mat talk is basically giving encouragement to anybody that’s on the floor with you [to let] them know that you have somebody that’s looking out for you and wants to be there for you.” He then gave Ellen DeGeneres a mat talk and said, "Let's go, Ellen! You got it!"