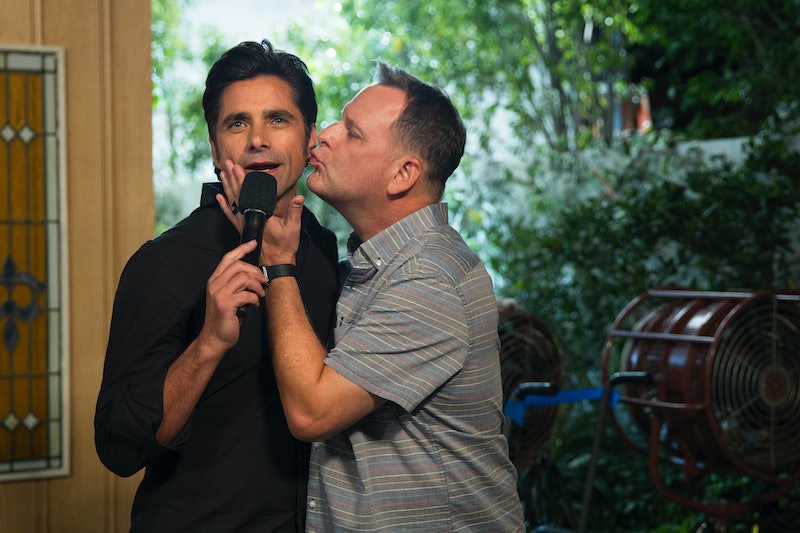 Even though it was strange not to see the fan favorite Full House characters until the end of Season 5, Episode 9, it's actually pretty par for the course for this show to not have the OG members in it as much. Fuller House is more dedicated to the storylines about D.J., Stephanie, and Kimmy and their own families. Every once in a while the adults from the original Full House series pop by, but Fuller House is technically a spinoff with many new characters and storylines. It can't all be a walk down memory lane.

In the show's 66 total episodes thus far, Joey and Jesse have only been in 14 of them. That's the same amount that Bob Saget's Danny Tanner has been in as well. They haven't all appeared in the same 14, though, which has allowed the show to have a fun guest appearance every few episodes. In Season 5, Danny shows up in the first and the last episodes of Part 1. It makes sense that he's there for the first episode, because that's when Stephanie brings home her daughter and names her after Danny. It makes a little less sense that Jesse and Joey weren't there for that special moment as well.

But all three of them appeared together in Episode 9 to be part of Steve's flash mob proposal for D.J.. They wouldn't miss a big event like that, and Jesse and Joey make their only Part 1 appearance when they tango into the dance together, arm in arm. Then, Jesse strums a gentle tune on his guitar during the actual proposal part while Joey and Danny look on fondly. It was just about the shortest cameo ever for all of the characters, but a sweet one nonetheless.

However, for fans who wanted more of Jesse and Joey (and Danny too, since he was only in two episodes), they're all guaranteed to be in at least one more episode in the final nine. Based on social media posts from the last day of filming, all of them make an appearance in the series finale. It would be super weird if they didn't, so it's good that they all, at the very least, got to send the show off with the whole cast. We'll even get to see Joey in his iconic Red Wings jersey that he used to wear in Full House as well. "Only fitting that I’d be standing in our kitchen with @bobsaget wearing a Ted Lindsay jersey for the final scene," Coulier wrote on Instagram.

Saget also posted a photo from the final episode of him standing with Coulier and Stamos post-filming. His caption indicated that all three of them were there for it. "Last night, standing in the stage door with my brothers for life — John and Dave — after filming the last episode of the 5th and final season of Fuller House," Saget wrote. "So much love for everyone involved with this show."

It's possible that they'll all be in more than just that final episode, but we won't know until the Part 2 premiere date gets closer. One person who won't be there, though? Lori Loughlin, since she's dealing with legal issues at the moment. Uncle Jesse will just have to send the show off for both himself and Aunt Becky this time around.