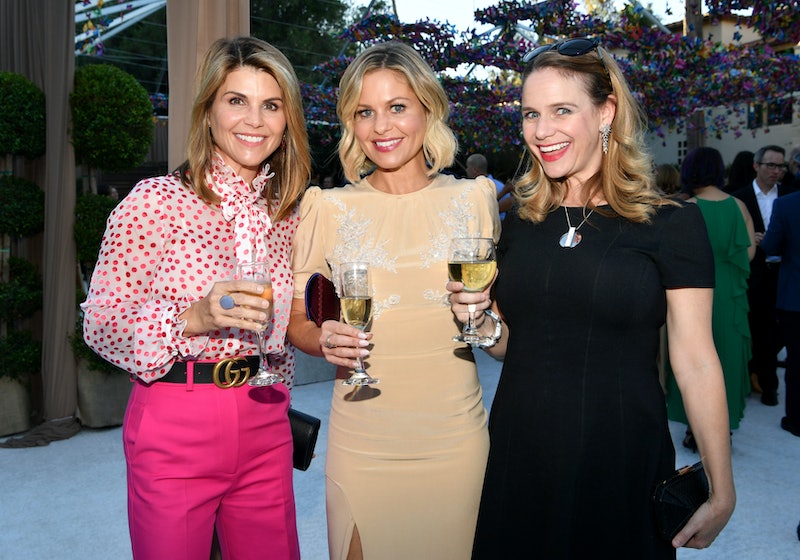 If Fuller House fans want to know how the character of Aunty Becky will be handled during the fifth and final season of the Netflix series, D.J. Tanner-Fuller doesn't know. Candace Cameron Bure commented on Lori Loughlin's Fuller House status and shared she's unsure of how her absence from the comedy will be addressed. As previously reported by TVLine in March, Loughlin is expected not to return for the remaining 18 episodes amid the college admissions scandal.

"It hasn't been discussed. I have absolutely no answer for it and Netflix has not even spoken about it."

Ever since Loughlin and her husband, Mossimo Giannulli, were accused of allegedly paying bribes in order to get their two daughters, 19-year-old Olivia Jade and 20-year-old Isabella Rose, into elite universities, Cameron Bure has expressed nothing but support for her costar. (Loughlin and Giannulli have both pleaded not guilty to charges of fraud conspiracy and money-laundering conspiracy. Bustle also previously reached out to Loughlin's rep for comment.)

While accepting the award for Favorite Funny TV Show for Fuller House at the 2019 Kids' Choice Awards, Cameron Bure, alongside Sweetin and Andrea Barber, also seemed to allude to Loughlin without ever saying her name. She said at the time, "Family sticks together no matter what. They stick together through the hard times. They support each other, they encourage one another, they pray for each other and they stand by their side no matter how tough it gets. And a loving family that sticks together also celebrates the really good times together."

Neither Loughlin nor her husband have officially commented on the bribery allegations. After leaving a yoga session on March 30, TMZ asked Loughlin if she was scared about the possibility of going to jail. She answered, "I’m sorry, I can’t talk to you. You can follow me around all day if you want, but I just can’t comment right now. But thank you for your time." At this time, both Loughlin's fate in real life and on Fuller House remain uncertain. Netflix also hasn't commented on Aunt Becky's future.

Speaking of the Netflix series, filming is officially underway. Cameron Bure told ET about the final season, "We're so happy that we get to do a whole other season, but knowing it's our last, we’re savoring every moment of it." She continued, "It's emotionally really hard, because I love what I do and I love the people I work with." Fuller House Season 5 is expected to drop on the streaming service sometime this fall.