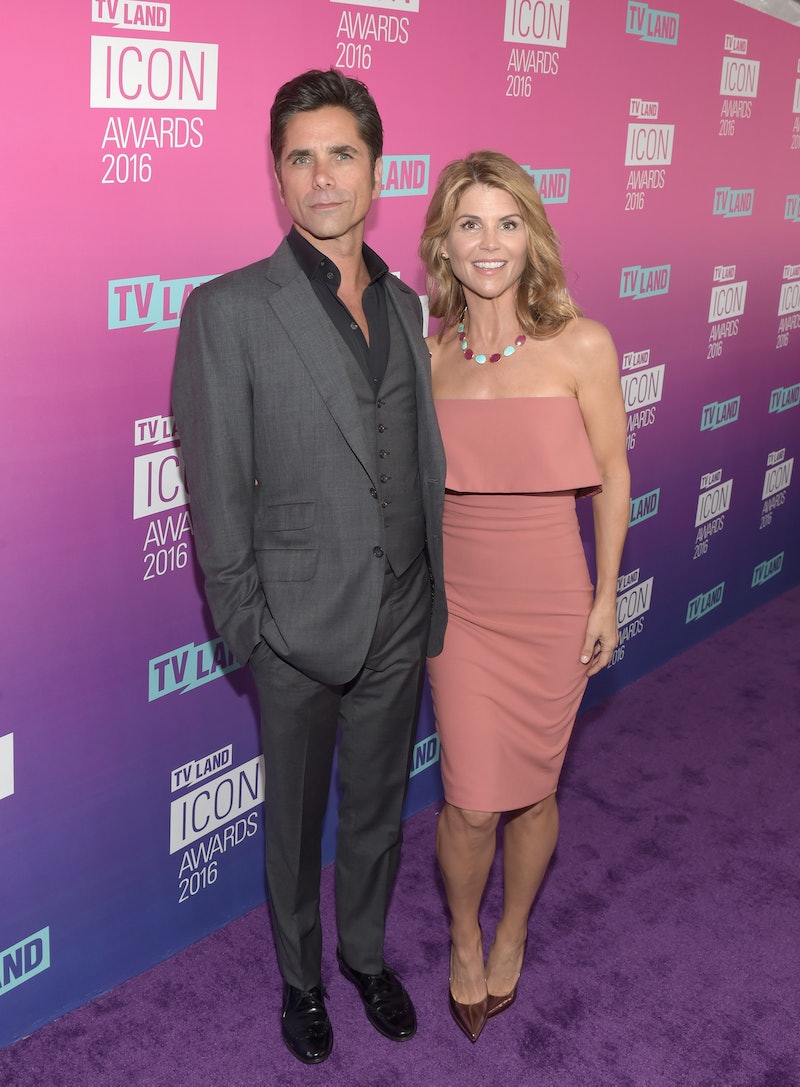 Months after the world learned of the college admissions scandal in mid-March, which charged high-profile celebrity parents including Felicity Huffman and Lori Loughlin, John Stamos spoke about Loughlin's Fuller House future. Most fans recognize Loughlin, who was one of dozens charged in the largest college admissions cheating scam prosecuted in the nation, according to ABC News, from her role as Aunt Becky on Full House.

Now her onscreen husband, Uncle Jesse (Stamos) is breaking his silence on Loughlin's future with the Netflix reboot. In a recent interview with Entertainment Tonight, Stamos did not confirm nor deny whether Loughlin would appear on Fuller House's fifth and final season, which was announced in January. Fuller House has reportedly been filming for three months after Loughlin and husband, designer Mossimo Giannulli were charged. The couple allegedly paid $500,000 for their daughters to be admitted to USC on crew scholarships, although neither daughter played the sport. (Loughlin and Giannulli have both pleaded not guilty to charges of fraud conspiracy and money-laundering conspiracy. Bustle also previously reached out to Loughlin's rep for comment.)

Regarding Stamos's thoughts on the situation, the Fuller House star and producer told ET: "I haven't been on the show yet and it hasn't come up, so I'm going to talk to some people about it this week and see what's going on. I'm just going to wait a little longer before I talk about it." He added, "It's a difficult situation for everyone involved. I don't mean just on our side."

Stamos isn't the first Fuller House castmate to speak out on Loughlin's future involvement. In early June, ET spoke with Candace Cameron Bure about Loughlin's status on the Netflix series, and received a similar response. "It hasn't been discussed," she told the outlet. "I have absolutely no answer for it, and Netflix has not even spoken about it, so I have no answer."

While Netflix has yet to give official word regarding an Aunt Becky cameo in the final season, TVLine previously reported in March that Loughlin is not expected to return for the remaining 18 episodes. That wasn't the only business deal to go sideways for Loughlin. On Thursday, Mar. 14, Hallmark announced its disassociation with Loughlin, as reported by Variety. After starring in 18 Hallmark movies over the last six years and playing a role in the channel's series When Calls the Heart, Crown Media cut ties with the actor.

Although Loughlin's legal battles are ongoing, her Fuller House co-stars have been publicly supportive in the past. During an April 2 Today show appearance alongside Jodie Sweetin, Cameron Bure said Loughlin her current circumstances hit too close to home for the tight-knit cast. "It's too personal to us," she explained. "We would never want to talk about someone that's such a dear and close friend. I've already said that we are family and we stand by each other and pray for each other and we'll always be there for each other."

While Netflix has yet to announce a Fuller House Season 5 premiere date, it's looking like Loughlin won't be involved.