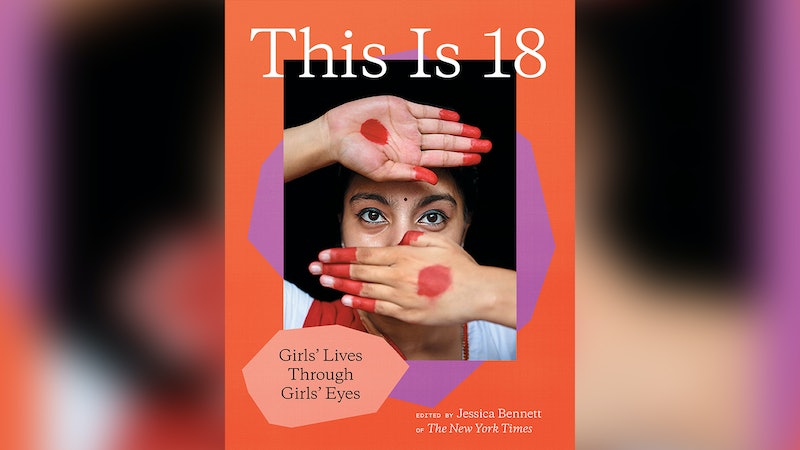 Feminist Fight Club author and the gender editor of the New York Times Jessica Bennett has a new collection of essays, art, and interviews for girls: This Is 18: Girls' Lives Through Girls' Eyes, out on Nov. 12. Bustle has an exclusive first-look at the cover below, as well as an excerpt from the book, so you can get hyped for This Is 18 well in advance of its publication.

When I was a kid, books featuring profiles on real kids and their lives were all the rage. Dorling Kindersley's Children Just Like Me featured oversized spreads of photos and text showing how children and pre-teens lived around the world. Later, the now-defunct gURL.com's The Looks Book offered up profiles of various fashion archetypes teens could pursue, such as the Chic Geek, Diva, and Ice Queen. This Is 18 has a little bit of the spirit of the both books.

According to publisher Amulet Books, This Is 18 contains profiles on "18-year-olds from 23 cities across six continents and 12 time zones, speaking 15 different languages." In addition to photo essays and interviews with the book's subjects, This Is 18 also includes playlists, slang, and other fun collections from contributors around the world. The book is an expansion of an Oct. 11 project from The New York Times, titled "This Is 18," which included the photo-essay piece "This Is 18 Around the World." Bennett worked with colleagues Anya Strzemien, an editor in Styles; Sandra Stevenson, a photo editor; and Sharon Attia, a social media editor, who are also contributors to the project.

Jessica Bennett says that there's a significance to the age shared by the young women featured in her new book. "Eighteen is an age, yes. But it’s also something more," Bennett said in the press release. "It’s a rite of passage. It’s a pathway. It’s a time to savor the last carefree moments of adolescence — and it’s a gateway to being an adult."

As the gender editor of The New York Times, a position she has held since late 2017, Bennett's work explores the lives of women of all ages, races, and economic classes. In Nov. 2018, Bustle teamed up with Bennett's The New York Times vertical to publish a list of "13 Political Secrets People Kept from Family and Friends." After the landmark publication of Kristen Roupenian's short story "Cat Person," Bennett and New York Times Modern Love editor Daniel Jones joined forces to create a wide-reaching piece exploring how people practice consent in their personal lives. More recent pieces include a profile on The Citadel's Sarah Zorn and an examination of the precarious position Missouri's last abortion clinic now occupies. This Is 18 brings Bennett's work at The New York Times to a wider audience.

Check out Bustle's exclusive excerpt from This Is 18 below:

This Is 18: Girls' Lives Through Girls' Eyes is out on Nov. 12, and available for pre-order now.