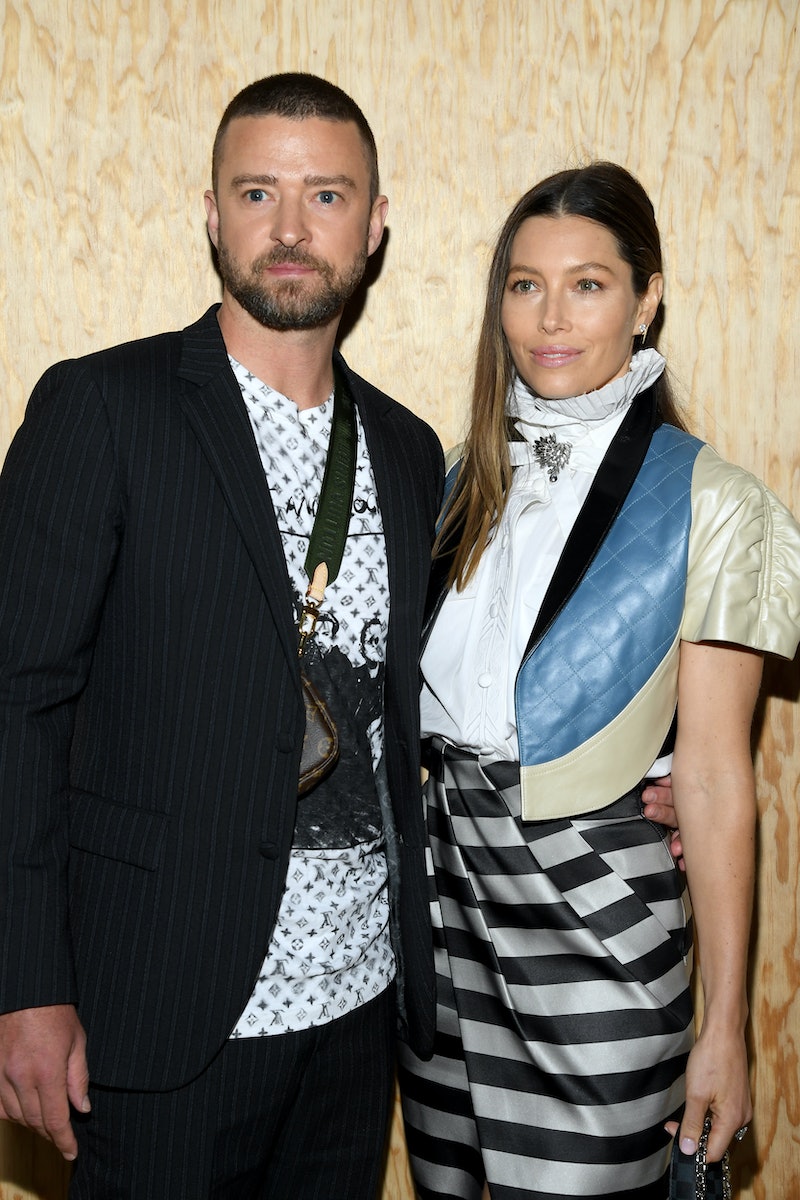 Anyone who grew up listening to *NSYNC in the late '90s and early aughts daydreamed about marrying Justin Timberlake and having him serenade them with some of the band's most iconic songs. But during a recent appearance on The Tonight Show, his wife, Jessica Biel revealed she doesn't know any *NSYNC songs— and, in fact, has never been a fan of the boy band's music. While chatting with host Jimmy Fallon on Tuesday night's episode of the late night show, Biel admitted that she doesn't know a single lyric to any of the songs that helped make Timberlake famous.

Recalling a recent trip that Timberlake and Biel took to Italy with some of their friends, the Limetown actor revealed that during a game of "Truth or Dare," she was challenged to sing an *NSYNC song. "I literally couldn't [do it]," Biel confessed. "I only know three words, 'Bye, bye, bye.' Which I guess is just one word three times." However, her friends wouldn't let her attempt to sing the band's most iconic single. "I had to sing something else [and] Justin coached me through the chorus, the verse, I was looking at the words, it was humiliating!"

It turns out that Biel's ambivalence towards her husband's first band dates back to the height of *NSYNC's fame, as the actor admitted that when she was younger, she was a "lame music geek" who wasn't interested in the pop charts. "I was just listening to old-school stuff," Biel said. "I was listening to theater productions, I was listening to Rent, I knew every word from Rent, I was listening to Motown. I lived under a rock, I wasn't into pop culture music."

To prove just how uninterested Biel was in *NSYNC's music, Fallon surprised the actor with a clip from a 1999 interview where Biel shaded the boy band. "To be honest, I don't really listen [to them]," the 7th Heaven star said at the time. "I mean, I know of them, of course. And I've heard of them, and I've heard the music. But I don't think I own any of their CDs." A younger Biel then added, "I'm not a huge fan, but, cool, I guess."

While she might not have been an *NSYNC fan, Biel has been much more supportive of Timberlake's solo music, even appearing in his "Man of the Woods" music video. In a February 2018 interview with Beats 1 DJ Zane Lowe, Timberlake revealed that he asked Biel to star in the clip because the song was a "love letter" to his wife. "I actually hope we get to work together again on more stuff, you know, because having her around, she's such an influence on the album," Timberlake said.

That career support goes both ways; in 2015, Biel gushed to Good Morning America that her husband is her biggest fan and supports all of her projects. "[Timberlake] supports everything that I do and that's I think why he's a wonderful partner," Biel said. "And we should just be able to talk and laugh and learn together."

It sounds like the only way Biel is going to learn any *NSYNC songs is if her husband decides to do a reunion tour, so, Timberlake, the ball is in your court.

More like this
Britney Spears Shares & Deletes Photos Of Justin Timberlake From 22 Years Ago
By Jake Viswanath
Hilary Duff's Husband Matthew Koma Has Her Name Tattooed On His Butt
By Jake Viswanath and Stephanie Downs
Prince Harry Incorrectly Recites Christina Aguilera’s “Genie In A Bottle” Lyrics
By Jake Viswanath
'That '90s Show' Star Callie Haverda Got Advice From Mila Kunis & Ashton Kutcher
By Brad Witter
Get Even More From Bustle — Sign Up For The Newsletter
From hair trends to relationship advice, our daily newsletter has everything you need to sound like a person who’s on TikTok, even if you aren’t.