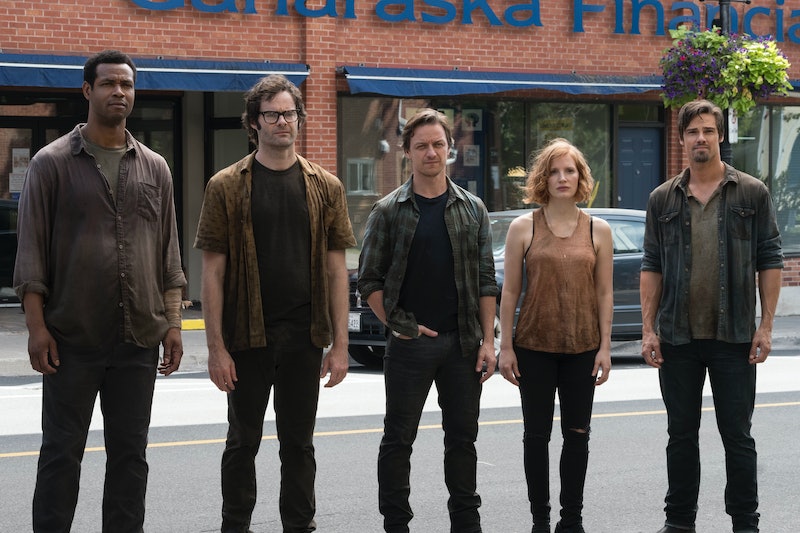 If you do one thing between now and Halloween, it should be watching IT: Chapter Two. Your 2019 spooky season will be so much better for it (pun intended). The first film from this IT series was released back in 2017, with Andy Muschetti stepping into the director's seat and Bill Skarsgård cast as the infamous evil clown Pennywise who's life mission is tormenting the "Loser's Club." This time around, the Losers are back, and they're all grown up. Chapter Two's all-star line up includes Jessica Chastain and James McAvoy, and I sat down with the two actors to hear more about what it was like becoming a part of this iconic franchise.

IT: Chapter Two picks up 27 years on from where we left the Losers, Bill, Beverly, Mike, Ben, Richie, and Eddie. Most of them are smashing it in their new jobs, far away from the fictional town of Derry, where the gang grew up together. Beverly works as a fashion designer and Bill as a famous author (in the lineage of many Hollywood movies before them, these jobs are Very Achievable Adult Professions). But, when Pennywise returns, Mike is forced to call the group back together.

In an interview with MTV back in 2017, Sophia Lillis — who played young Beverly in IT — was asked who her dream actor would be to take over the role. And guess who she said? Jessica Chastain.

"I felt like Soph did a lot of the work for me," Chastain tells me as she explains what it was like the take on Beverly's story.

And McAvoy, who plays the older version of Bill, describes the process in a similar way, explaining it was "really unique" to come into something where you are already so familiar with the character you're playing.

"As an actor you always have to create a back story and come up with your history," he says. "But with this we got to watch a whole movie and see our memories beautifully realised and even have a soundtrack to it."

Chastain agrees, saying, "It was like watching a whole movie, in some sense, of your childhood."

In Stephen King's novel, Pennywise returns to Derry every 27 years to torment and kill its inhabitants. But this time, Mike is the only member of the Loser's Club still in Derry and, after the promise they made in the first film, to kill "It" if it ever came back, he is tasked with reassembling the group.

This film is even more emotional than the first, so expect get a little teary as we see how the gang's relationships and lives have changed, but are still shaped by their shared past. "It" becomes so much more than Pennywise in this film; it embodies the personal demons of each character and, in order to conquer the monster, each member of the group has to go on an individual journey. But do they succeed in defeating the creature that has tortured their childhood and allowed their greatest fears to be realised? You'll have to watch to find out.

McAvoy for one certainly hopes "It" is gone for good. When I ask where he sees Bill in 27 years, he replies, "hopefully not in Derry fighting Pennywise again." And Chastain has high hopes for Beverly's future, saying she sees her "as very happy and as a mum."

McAvoy adds, "I see Bill Denborough getting a lifetime achievement from the Academy and he's coming back from his second major drug scandal and he's started a writing commune, which is really just a commune, with him at the head."

Sounds like a pretty good final film if you ask me.

🤡 Would You Rather: The Horror Edition 🤡

Would you rather babysit Chucky or Annabelle?

Would you rather be in a room full of African killer bees or Black Mamba snakes?

JC: The killer bees for sure. Snakes... I'm not into that at all!

JC: I just saved your life.

JC: I would rather they were all closed.

JM: And jump out the window.

JC: I'd rather be not hear anything. I want to be able to see.

JC: Yeah, because I will say that, with the scary movies, a lot of it is with the scary music. So you could just sing in your head, "I'm coming up so you better get this party started..."